Gold can rise higher on buying by risk-averse investors

Investment in gold has long been held as the best option for risk-averse investors in uncertain times. 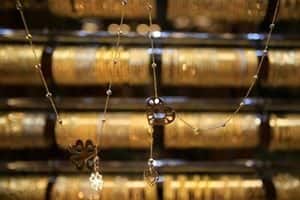 The company, which started as a gold loan company, has today expanded and ventured into foreign exchange and money transfer as part of diversification. (Photo: Reuters)

Since Brexit in June 2016, stock markets have rebounded after governments and central banks indicated they were ready to do “whatever it takes” to prevent slippages in their economies. The Bank of England has now cut interest rates to a historic low of 0.25 percent accompanied by a £170 billion package of stimulus measures. Earlier, the Japanese government had announced a fiscal stimulus said to be worth $276 billion. All this in a world already awash in fiscal and monetary stimulus money, with the US alone estimated to have pumped in $7.66 trillion between 2008 and 2012. Injection of newly minted money is likely only to extend the lull before the next big storm. Good times, we know, don’t last forever. But, whether artificially propping up the economy with liquidity will hold back bad times forever, remains uncertain.

There is, however, one asset class about which there is no uncertainty and that is gold. Investment in gold has long been held as the best option for risk-averse investors in uncertain times. It was proved again as gold jumped nearly 5 percent (to $1,315) on the day of the Brexit verdict. In fact, even before the vote, gold had already posted gains of 20 percent during the year given the continuing growth woes in the developed world and with China faltering too. Since 1974, gold has not had a better first half of the year. However, despite the gains so far, the key takeaway today is that more appreciation is on the way.

Gold price is, by and large, inversely related to interest rate being non-interest bearing. Any rise in uncertainty in the global market, and risk-averse investors pull out money from risky assets to park in safe haven investments like dollar denominated bonds and gold. Similarly, falling interest rates nudge gold price higher as the opportunity cost of holding the asset falls.

The slow pace of recovery after the 2008 meltdown has compelled central banks across the globe to maintain low, even negative, interest rates to stimulate growth or to shore up whatever little of momentum there is. This easy money stance with interest rates held artificially low increases risk appetite. A significant chunk of this money then gets diverted to emerging markets in quest of higher returns pushing up stock indices in these parts while the lack of positive returns from bonds makes gold more attractive to hold.

The latest data from the World Gold Council shows record investment in gold in the first half of 2016 with investors buying 1,064 tonnes during the first six months of 2016, 16 percent more than in the first half of 2009 when the financial crisis was most acute. Investment, rather than jewellery, was the largest component of gold demand for two consecutive quarters, which has not happened before. Individual investors, recoiling from historically low interest rates on bank deposits, have also been buying up gold bars and coins. Demand for the US Gold Eagle coins has jumped 84 percent this year.

Not surprisingly then, Bank of America analysts in July raised the target on gold to $1,475 noting, “the world has been walking from crisis to crisis and we see risks that this may not change.” Analysts with Credit Suisse have suggested that $1,500 an ounce mark could be tested by the end of the year in view of the prolonged macroeconomic uncertainty while UBS says gold “is more compelling than ever” today because of low and negative interest rates and global geopolitical risks.

After experimenting with artificially low interest rates, the trend towards negative interest rates on sovereign bonds is proving to be another support for gold. The conventional argument against investing in gold is that the metal generates no income while investment in bonds and shares fetches interest and dividends which offset the risk of fall in capital values. In contrast, when you invest in gold, you are effectively betting only on favourable price movements.

However, with negative interest rates increasingly becoming the norm in the advanced economies, holding on to cash and gold becomes a sensible option. According to a recent report in Financial Times, about $13.4 trillion of sovereign bonds, primarily European and Japanese, are trading with negative yields. For many central banks these days, it’s a race to the bottom and beyond. What’s more, an increasing number of highly rated corporate bonds are also starting to get into the negative yield act. The case for gold has just become stronger.

Of course, if there is a dark cloud somewhere, it is that the most recent uptick has been driven strongly by ETFs getting back in to the market. The risk is that demand will fade once there are signs of an economic recovery. And that should be flagged as the potential threat to gold price going forward.

The author is MD & CEO of Manappuram Finance Ltd. and Chairman of CII, Kerala State Council.