Traders’ focus was turned to the release of inflation data on Friday and a Federal Reserve meeting next week for indications on hike timing. 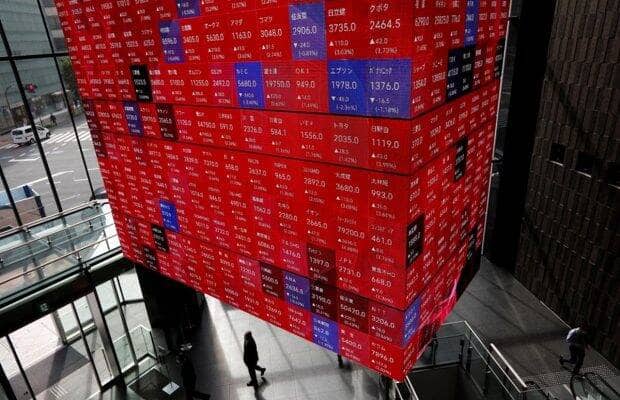 Stocks rose in choppy trade on Thursday as worries about the economic impact of the Omicron coronavirus variant ebbed but increasing caution ahead of U.S. inflation data capped other risk assets such as oil and the Australian dollar. Bonds were nursing losses since a brighter virus outlook leaves a clearer path to higher rates. Traders’ focus was turned to the release of inflation data on Friday and a Federal Reserve meeting next week for indications on hike timing.

MSCI’s broadest index of Asia-Pacific shares outside Japan rose 0.5% to a two-week high. Japan’s Nikkei was steady, having gained 3.5% in the previous two sessions.S&P 500 futures were steady after a 0.3% rise in the cash index overnight carried it to within 1% of a new record high.

“Volatility remains elevated as the drip of news around Omicron continues,” said analysts at ANZ Bank, and beyond it looms an expectation of higher U.S. interest rates in 2022.”An acceleration in the pace of tapering by the Fed is almost being treated as a foregone conclusion. But a strong number could ramp up expectations of a hike in Q2 next year.”

On Wednesday, BioNTech and Pfizer said a three-shot course of their COVID-19 vaccine was able to neutralise the Omicron variant in a laboratory test.Market sentiment has also recovered with other pieces of preliminary data suggesting Omicron is less severe than first feared, though offsetting that has been the imposition of tougher restrictions in England to curb Omicron’s spread.

The Australian dollar is up 2.6% in three sessions and flat at $0.7166 in early trade on Thursday.Brent crude has added $10 a barrel from last week’s three-and-a-half-month low and was steady at $75.82.China’s yuan held at 6.3458 per dollar after hitting a three-and-a-half year high of 6.3438 on Wednesday, with a move to ease monetary policy from next week seen supporting the Chinese economy.The pace of factory gate price rises in China slowed last month, data showed on Thursday, with the annual pace at a still whopping 12.9%, while inflation picked up to 2.3% year-on-year.

The main scheduled event of the week is Friday’s U.S. inflation data, seen as a prelude to the Fed’s December meeting next week.Fed funds futures are priced for rates to lift-off next May and on Wednesday two-year Treasury yields touched their highest since March 2020 at 0.7140%. They were steady at 0.6955% on Thursday and 10-year yields held at 1.5332% after a 4.6-basis-point jump on Wednesday.

Economists expect annual headline U.S. inflation to have hit 6.8% last month, though previous readings have surprised on the upside.”A 7 as the big figure may be good for the dollar bulls and get 2-year Treasury yields pumping higher,” said Chris Weston, head of research at broker Pepperstone.”But I think we need a steeper U.S. Treasury yield curve to convince us about better growth in 2022.”

The Wednesday moves weren’t enough to support the dollar, which slipped sharply on the euro to trade at $1.1333 by Thursday morning.Elsewhere in currency trade the yen has edged below its 50-day moving average to 113.76 per dollar. Sterling fell to a one-year low of $1.31615 overnight with the announcement of the tighter COVID-19 rules.The U.S. dollar index hovered at 96.029. It had recovered slightly to $1.3197 on Thursday. Gold was steady at $1,783 and ounce and bitcoin looks to have found a floor around $50,000.

Next Story
Construction steel prices up 117% in 6 years