Glenmark Pharmaceuticals shares rallied as much as 4 per cent in the early trade on Monday after HSBC upgrades shares of the pharma company from ‘hold’ to ‘buy’. 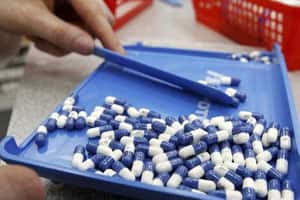 Aurobindo Pharma surged over 6 per cent intraday on Thursday after it received tentative approval for Dolutegravir 50mg from US Food & Drug Administration (USFDA) used in the treatment of HIV-1 infection in combination with other antiretroviral agents. (Photo: PTI)

Glenmark Pharmaceuticals shares rallied as much as 4 per cent in the early trade on Monday after HSBC upgrades shares of the pharma company from ‘hold’ to ‘buy’.

In the past six months, shares of Glenmark Pharmaceuticals fell 33 per cent to Rs 770.90 on January 29. On the other hand, Sensex fell 5.37 per cent during the period. According to HSBC, all negatives are priced in and stock is trading 20 per cent cheaper to peers.

According to Religare, Glenmark Pharma’s Q3 earnings missed estimates by 11 per cent led by a revenue miss across key geographies and higher taxes. “While emerging markets currency issues may persist near term, we expect US business – with approvals of Ortho-tricylen Lo, Nitroglycerin and later the Zetia launch – to drive performance in the medium term. We pare FY17 and FY18 earnings estimates by 18 per cent and 13 per cent to reflect the weak quarter, higher tax rate and gradual debt reduction, but retain ‘Buy’ on favourable valuations with a new March 2017 target price of Rs 1,040 (from Rs 1,370).”