Ferrari roared onto the New York Stock Exchange Wednesday and its shares, trading under the ticker symbol RACE, jumped sharply in their public debut. 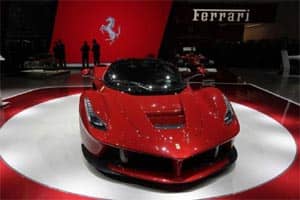 Ferrari roared onto the New York Stock Exchange Wednesday and its shares, trading under the ticker symbol RACE, jumped sharply in their public debut.

Ferrari, based in the northern Italian town of Maranello, had been a private company since its founding in 1929 by Italian sports driver Enzo Ferrari.

For Fiat Chrysler, the IPO raises needed cash and also helps pare debt at the world’s seventh largest automaker, which has ambitious plans to expand its Alfa Romeo brand and other higher-margin luxury cars like Maserati.

There were questions, however, about how becoming a public company might affect such an iconic brand.

IHS acknowledged that it did not know if the company would devote any new production to higher-end models that cost well in excess of $200,000 which already exceed demand or, like in the late 1960s and early 1970s, it would again start making lower-priced models to put the Ferrari within reach of more people.

”Whatever the strategy it chooses to enact, it will be keen to maintain the combination of mystique and profit-generating ability of this business,” said Ian Fletche, an IHS analyst.

In an interview with CNBC from the floor of the NYSE, Sergio Marchionne, CEO of Fiat Chrysler Automobiles and chairman of Ferrari, said he would not allow increased production to threaten the Ferrari tradition.

”What is at the heart of the brand is this intimate relationship between us and the customer base. We have 60 percent of the people that buy our cars every year are returning customers,” Marchionne said. ”And therefore it would be almost suicidal to try and expand volumes to the detriment of that relationship.”

Fiat Chrysler Automobiles will still retain an 80 percent share in Ferrari. It plans distribute Ferrari stock to its shareholders next year.

The remaining 10 percent belongs to the Ferrari family.

The IPO, even in what has become a dodgy market with doubts about the economic recovery seeping into the minds of investors, raised more than $893 million this week.

A number of companies in recent weeks have canceled IPO, fearing the market malaise.

But investors clamored for a piece of one of the world’s premier automakers, erasing doubts about the allure of holding its stock.

In midday trading, shares of Ferrari climbed almost 10 percent to $56.98.