The macro-economic environment is going to be the key driver for all markets including agriculture for a while and obviously, agricultural markets won’t lose site of their own fundamentals. 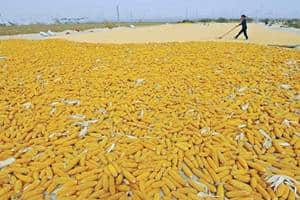 The macro-economic environment is going to be the key driver for all markets including agriculture for a while. (Reuters)

“The agricultural markets have been caught in the storm on Brexit,” said Luke Mathews, senior risk management consultant at FCStone Australia.

“The macro-economic environment is going to be the key driver for all markets including agriculture for a while. Obviously, agricultural markets won’t lose site of their own fundamentals.”

Fundamentals remained bearish for agricultural markets. Storms rolled through the US corn belt this week, easing concerns about dryness in some areas.

With the crop heading into its pollination phase, which typically occurs in July in the US Midwest, weather remained the focus. “Corn and soybeans have come down in recent days because of good rains across the Midwest,” a Singapore-based grains trader said.

“It has been dry in wheat areas which is good for the winter crop harvest.” For the week, corn is down more than 13 percent, the most since June 2013 and soybeans have shed almost 6 percent, the biggest weekly drop since July 2014.

The soybean market faced additional pressure from improving supply outlook in Argentina. Argentina increased its 2015-16 soybean crop estimate to 58 million tonnes from a previous forecast of 57.6 million, citing a faster-than-expected recovery of areas thought to have been lost to floods caused by unusually hard April rains.

“Very high yields continue to be seen, despite some excessive wetness, in Buenos Aires and La Pampa provinces, as well as in the parts of Cordoba and Santa Fe that were not affected by the floods,” the agriculture ministry said.