Copper prices on the Multi Commodity Exchange (MCX) fell to nearly six year lows to Rs 288.25 per kg on January 14 this year due to slowdown concerns in China, fall in global stock markets, interest rates rise in US and decline in global demand. 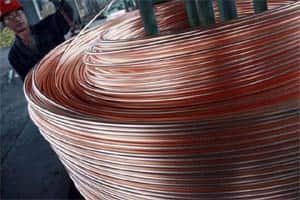 Copper prices on the Multi Commodity Exchange (MCX) fell to nearly six year lows to Rs 288.25 per kg on January 14 this year due to slowdown concerns in China, fall in global stock markets, interest rates rise in US and decline in global demand. (Reuters)

Copper prices on the Multi Commodity Exchange (MCX) fell to nearly six year lows to Rs 288.25 per kg on January 14 this year due to slowdown concerns in China, fall in global stock markets, interest rates rise in US and decline in global demand. Rise in dollar index also kept the red metal under pressure as it tested above 100 in the recent past. The metal was at Rs 288.30 per kg on June 8, 2010.

On January 28 this year, copper was trading at Rs 309.35 per kg. However, market experts are looking bearish on the further movement of the metal due to bleak macro economic conditions.

According to market experts, slowdown in China has impacted copper prices adversely. Copper which is also known as barometer of economy often moves with the performance of economy. China frenetic growth propelled the world’s booming demand for copper over the past decade and its deceleration has already inflicted major damage on copper prices. Copper prices also melted lower in last quarters as earnings by industrial companies in China, responsible for 45 per cent of world copper consumption, tumbled by $24.6 billion or nearly 9 per cent from a year earlier.

Himanshu Gupta, senior research analyst, Karvy Comtrade, said, “The continuous devaluation in the yuan against the dollar by the China’s central bank raised alarms that the state of China’s economy might be worse than estimated. China being the top consumer of the base metals, the turmoil in its equity markets spilled into the base metals complex, including copper. With no signs of a pick-up in demand, prices continued to slip further due to oversupply, and higher production in Peru, (the world’s third largest supplier).”

As per the latest data released by the International Copper Study Group (ICSG), the global refined copper market showed a 2,000-tonne surplus in October 2015 and a 60,000-tonne surplus for the first ten months of 2015 compared with a deficit of around 4,85,000 tonnes in the first ten months of 2014. Global refined copper production was 1.98 million tonnes and consumption was 1.97 million tonnes in October.

Before investing in copper, an investor should look at factors such as global supply and demand factors, China exports and imports of copper, movement of dollar index, inventory position in the London Metal Exchange, movement of global stock markets and rupee dollar which effect domestic copper prices. Meanwhile, production cuts by existing mines and opening up of new mines also affect the supply scenario of copper.

On copper price outlook, Hitesh Jain, senior commodity analyst, IIFL, said, “The consensus is that there can be more downside in copper prices as the production cost curves for copper has also moved lower, thanks to the descent in energy prices and depreciation in emerging market currencies. On price outlook, we see copper at Rs 260 per kg on the MCX this year.”

Prathamesh Mallya, senior research analyst, non-agri commodities, Angel Broking, said, “As copper is a barometer of global economic health, price of the same reflects the fundamental strength or weakness the world is going through. String of weak economic data releases from major demand driver China along with stock market crash and persistent Yuan devaluation has pushed the investors away from risky metals. We see bearish momentum in copper for 2016 and prices are likely to trend lower towards Rs 250 per kg on the MCX.”

Follow us on
Most Read In Market
Deductions under Chapter VI A of Income Tax Act: Know how much tax may be saved
1
Income tax: Tax deductions can be reversed
2
How much money can you deposit in a savings account in a year to stay outside the taxman’s radar?
3
How to avoid TDS on salary with NPS, SSY, Home Loan, HRA, LTA: Explained
4
Last date for issuing Form 16 extended till July 31: Here’s how you may still file ITR for AY 2021-22
5
High value transactions which can get you an income tax notice – Check full list
6
YOUR QUERIES: INCOME TAX: Can switch to old tax regime at the time of filing income tax return
7
Earning Rs 6 lakh, Rs 8 lakh, Rs 10 lakh or Rs 12 lakh? Pay this tax without deductions
8
Income Tax Return 2019: How to find PAN of a company on income tax e-filing website or by using GSTIN
9
Restrictions on cash transactions under Income Tax laws: Here’s all you wanted to know
10
Latest News
Banks switch to overnight window to park surplus funds
Ultratech Cement Rating: hold; Capex expected to make sector sentiment worse
In a historic first, weavers import cotton yarn
Nirmala Sitharaman to launch single nodal agency dashboard on June 7
Max Estates to acquire Accord Hotel & Resorts for Rs 306 crore; To enter housing segment
First set of NPAs likely to be transferred to bad bank next month, says FinMin
Delhi reported 118 dengue cases so far this year
Photos
Bharat Drone Mahotsav 2022: Check out photos from India’s biggest Drone Festival
1 week agoMay 27, 2022
This is how Indian Railways’ Vande Bharat Express trains are manufactured – See PHOTOS
1 week agoMay 27, 2022
Rakesh Jhunjhunwala-backed Akasa Air reveals first pics of India’s low-cost aircraft – Take a look
2 weeks agoMay 25, 2022
Read More
×
US stocks: Equities climb on Wall Street, led by more gains in tech
Tamilnad Mercantile Bank gets Sebi’s nod to float IPO
India in talks to increase Russian oil imports from Rosneft
Sensex ends flat amid volatility, Nifty’s chart suggests range bound activity in near-term, support at 16500
Nifty to trade flat with negative bias over next 3 months; SBI Life, Infosys among top picks | INTERVIEW
Rakesh Jhunjhunwala portfolio stock up 27% so far in 2022, may rally another 19%; should you buy?