A group of officers from the state agriculture department on Tuesday visited houses of farmers in Maharashtra’s Akoli Jahagir village to collect samples of seeds of genetically-modified (GM) HT Bt cotton. 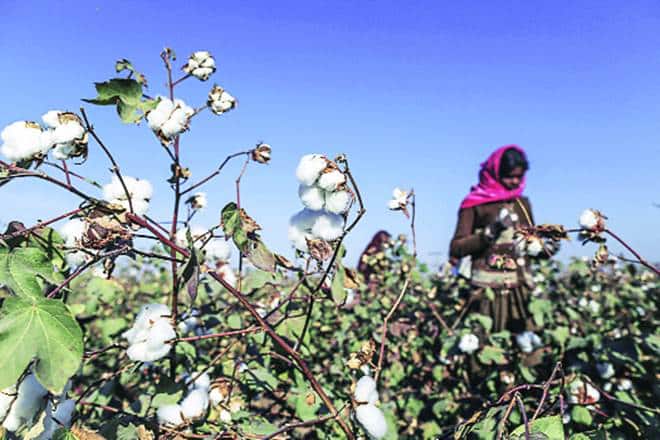 Over the past few years, herbicide tolerant Bt cotton has been planted in many cotton-growing areas of Gujarat, Maharashtra, Telangana and Andhra Pradesh

A group of officers from the state agriculture department on Tuesday visited houses of farmers in Maharashtra’s Akoli Jahagir village to collect samples of seeds of genetically-modified (GM) HT Bt cotton.

On Monday , around 1,500 farmers led by Shetkari Sanghatana participated in a ‘civil disobedience’ movement in the village and sowed HT Bt cotton in a symbolic ceremony to protest the Centre’s ban on GM crops.

Lalit Bahale, a Shetkari Sanghatana activist and farmer, openly sowed GM herbicidetolerant (HT) cotton seeds on his farm in this village in Akola district of Maharashtra on Monday.

He said some officers had visited his residence on Monday and Tuesday to collect samples but had to go back since they could not find the requisite 50 gm needed for conducting tests. He added they would be coming back again and he had informed that he shall check his house again to see if there were any more seeds.

The officials may visit Bahale’s residence in a couple of days to collect samples. If the samples are not available, they may have to wait for the plants to grow up for conducting tests, he said.

HT cotton is not approved for cultivation or sale in India, though it is being grown illegally in many states. A plan to plant Bt brinjal (on which there has been a moratorium since 2010) failed as the seeds were not available.

Bahale said that he was prepared to face any legal action as he was of the view that farmers should have access to technology. Currently, planting HT seeds attracts a five-year sentence and penalty of `1 lakh. He said he had already been issued a notice by the local police. While the police did not stop the planting, the agriculture department has served notice to the farmers, warning against such illegal planting in the future.

Anil Ghanwat, national president, Shetkari Sanghatana, said farmers must be allowed to use GM varieties, particularly as the country already allows the import of certain edibles of the genetically-modified variety. “We are importing Canola oil from Canada, which is being made using GM genes. If that can be consumed, then why not the Bt brinjal? Why can’t farmers grow Bt cotton,” he asked. Ghanwat said that they would continue to plant these seeds in every district and put out videos on social media to build pressure on the government.

When contacted, senior officials in the quality control of the state agriculture department said the Centre had appointed BioSafety Committees in districts to monitor such happenings and the district collector might have taken action at his end by seeking samples of these seeds.

Senior agriculture department officials in Akola confirmed that officers had visited the residence of the farmer and they would continue the search until they find the samples.

The official who did not wish to be named revealed that after the samples were seized these would be sent for testing. And, they would then have to coordinate with the district collector and police authorities to decide on the further line of action, they said.

Over the past few years, herbicide tolerant Bt cotton has been planted in many cotton-growing areas of India, particularly in Gujarat, Maharashtra, Telangana and Andhra Pradesh.

A government of India field survey in 2017 found that 15% of cotton sampled from these states were the unauthorised HT Bt variety.