The German data added to a growing pile of numbers suggesting business growth is weakening across the euro zone, hurt by a deepening contraction in manufacturing. 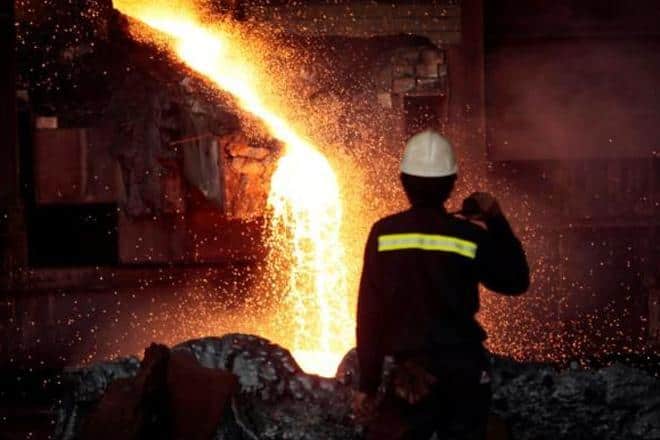 Nickel prices dived more than 3% on Thursday, its blistering rally unwinding as a sharp slowdown in euro zone factory activity undermined the outlook for metals demand.

Also Read
Govt lifts ban on exports of organic non-basmati rice
ONGC gas price to be capped at $6.5 for 5 yrs, no change in Reliance-bp price
Sensex vs Gold, both gain from 4,000 to 50,000 in last 21 years; yet, Sensex beats gold by about 50%
Edible oil prices to decline further, says food ministry

The rally was driven largely by speculators and not justified by fundamentals showing a largely balanced market, said Capital Economics analyst Ross Strachan.

“Nickel is returning to reality,” he said, predicting prices around $11,000 by the end of the year. He said that over the longer term, however, prices would rise as supply tightens.

Aggressive easing by the two central banks is designed to support economic growth, which should lift metals prices.

GERMANY/EURO ZONE: Underlining a slowdown in global factory activity that has pushed down metals prices, German business morale deteriorated more than expected in July, hitting its lowest since April 2013.

Recession is spreading across the German industrial sector, Ifo economist Klaus Wohlrabe said.
The German data added to a growing pile of numbers suggesting business growth is weakening across the euro zone, hurt by a deepening contraction in manufacturing.

TRADE WAR: Negotiators for China and the United States will meet in Shanghai on Tuesday to continue talks to resolve a trade dispute that has roiled markets and damaged growth in China, the largest metals consumer.

Nearly 70% of global nickel consumption, estimated at 2.4 million tonnes this year, is by stainless steel mills, most of which are in China.

NICKEL STOCKS: Headline nickel stocks in LME-approved warehouses, at about 145,000 tonnes, are the lowest since 2013.