India gold prices break away from global rally in August, after surging together for 7 months

Gold prices in India broke away from the global price rally for the first time in eight months, and reversed gains in August, after climbing lock-step for the first seven of the current year 2020. 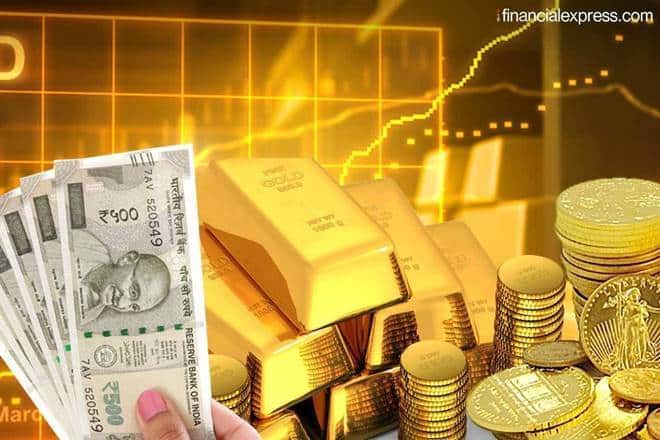 Gold prices in India broke away from the global price rally for the first time in eight months, and reversed gains in August, after climbing lock-step for the first seven of the current year 2020. A stronger rupee is the culprit behind Indian gold prices giving up some gains in August, while global prices continue marching up. India snapped the gaining spree, due to an appreciation in rupee against the US dollar. In the month of August, MCX gold shed 3.26 per cent from the previous month; however, on a year-to-date (YTD) basis, it soared 32.20 per cent till August 31, as compared to a gain of 23.72 per cent in 2019. Today, gold October futures were trading Rs 158 or 0.31 per cent higher at Rs 50,908 per 10 gram on the Multi Commodity Exchange (MCX).

Global gold prices have rallied for the eighth consecutive month in August, according to a CARE Ratings report. The average of daily global gold prices in August 2020 surged 7 per cent sequentially; while the growth was substantially higher at 31 per cent as compared to the corresponding month of the previous year. Gold continued to shine with its safe-haven appeal on the back of the global outbreak of Covid-19 and rising fears of a recession. The yellow metal prices rose by nearly 31 per cent in the financial year 2019-20 (from April to August) and 28 per cent in the calendar year 2020 (from January to August), the report noted.

India breaks away from global rally

In India, barring August, domestic gold prices rose for seven months straight in a row. “Indian rupee appreciated by 2.09 per cent in August while COMEX gold saw its first monthly decline in August after five consecutive positive monthly closings. On COMEX, there was a marginal fall of around half a per cent (-0.50%) but on MCX we saw gold shedding 3.26 per cent because of sharp rupee appreciation,” Bhavik Patel, Senior Technical Research Analyst at Tradebulls Securities, told Financial Express Online.

According to CARE Ratings report, August 2020 marked the eighth consecutive month of an uninterrupted global gold price rally in 2020. With the rising uncertainties, gold made a new record in the first week of August, when prices crossed the $2,000 per ounce mark for the first time in history. It continued to trade in the same range for the few days and touched nearly $2,100, before falling below the $2,000 mark. In the initial four trading sessions of the month, gold prices surged by 4.2 per cent. Mirroring this trend, MCX gold hit its all-time high of Rs 56,191 per 10 gram on August 7 this year.

What supported gold prices in August?

According to the CARE Ratings report, the factors behind gain in global gold prices in August were weakening of USD against EUR, growing geopolitical tensions between China and other developed as well as developing economies, meagre signs of respite in the spread of coronavirus US, the announcement of several government economic stimulus packages to boost growth which is expected to fuel inflation and surplus liquidity in the global financial system. It also added that with the valuation of stocks above their long-term average, gold appears relatively cheap.