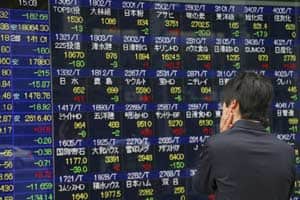 Many emerging market currencies felt the dollar's heat but the Turkish lira jumped 1.6 percent off near four-month lows after investor-friendly deputy prime minister Mehmet Simsek kept his post in the government.

Asian shares are expected to consolidate gains on Tuesday as the Chinese currency and shares show signs of stability, oil prices rebound, and solid US consumption data suggest last week’s sell-off was overdone.

Japan’s Nikkei slipped 1.0 percent after it climbed 7.2 percent on Monday, its biggest daily gain since 2008 which recovered a large portion of its 11 percent slump last week – also its biggest since 2008.

On Monday, European stocks rose 2.9 percent, having shed nearly 10 percent over the last two weeks. US financial markets were closed for a national holiday but globally-traded US stock futures rose 1.5 percent.

“It is partly a reaction after such big falls last week. Solid US data is also improving investor sentiment given that they are counting on US growth to lead the global economy,” said Hirokazu Kabeya, chief global strategist at Daiwa Securities.

US retail sales data published on Friday showing firm growth allayed fears – at least for now – that the U.S. economy could be dragged into recession as growth stumbles in many parts of the world.

Sentiment on the US currency also improved, with the dollar rising to 114.50 yen, recovering further from a 15-month low of 110.985 touched on Thursday.

The common currency was also driven lower by remarks from European Central Bank President Mario Draghi that the bank is ready to ease policy further in March.

Gold also fell 2.2 percent on Monday, its biggest fall in almost seven months, slipping further from Thursday’s one-year peak of $1,262.90 per ounce as safe-haven buying in the precious metal in recent weeks was rolled back.

The yuan was little changed at 6.4457 to the dollar in offshore trade after the People’s Bank of China (PBOC) on Monday set the midpoint rate at the highest level in over a month, easing worries about further devaluation.

Chinese mainland shares shrugged off the turmoil in global shares which occurred over the Lunar New Year holiday, with the Shanghai composite index slipping just 0.6 percent.

Oil prices gained on news of a rare private meeting of top officials from the world’s biggest oil producers spurred speculation of an eventual deal to tackle a deep supply glut.

Global benchmark Brent futures rose to $34.01 a barrel, rising to their highest level in a week. US crude futures also jumped back above $30.