Asian shares rose on Tuesday on hopes that Greece’s conditional bailout agreement would bring to an end that country’s debt crisis, though caution kept broad gains in check. 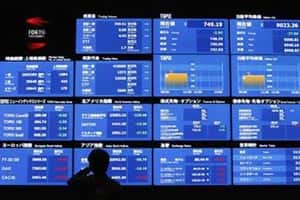 MSCI's broadest index of Asia-Pacific shares outside Japan fell 1.0 percent in early trade, extending its fall so far this month to over 11 percent. (Reuters photo)

Asian shares rose on Tuesday on hopes that Greece’s conditional bailout agreement would bring to an end that country’s debt crisis, though caution kept broad gains in check.

Meanwhile, oil prices skidded as the market awaited an announcement on a nuclear deal between Iran and six global powers that could lead to an easing of sanctions against Tehran and a resumption of its oil exports into an oversupplied market.

MSCI’s broadest index of Asia-Pacific shares outside Japan was up about 0.3 percent, while Japan’s Nikkei stock index added 1.7 percent, getting a tailwind from the weaker Japanese currency.

Greece’s Prime Minister Alexis Tsipras will face a showdown with members of his own party later on Tuesday, over the agreement under which Greece can get a possible 86 billion euros ($95 billion) over three years if it can satisfy its European partners that it is meeting their conditions.

The terms imposed by Athens’ international lenders led by Germany obliged Tsipras to abandon his pledge to end austerity.

US stock futures were slightly lower, with S&P 500 mini futures down a few ticks from late US levels, after Wall Street jumped on hopes for the Greece deal. All three major stock indexes ended up more than 1 percent, in what some strategists described as a relief rally.

But some said doubts would remain until the proposal is actually accepted.

“Investors did not like that a Grexit is still on the table if Parliament votes no,” managing director at BK Asset Management, said in a note to clients. “The risk is far less now than a week ago but the fact that it is not eliminated puts pressure on the euro.”

The greenback was buying 123.52 yen, up slightly, ahead of congressional testimony by Federal Reserve Chair Janet Yellen on Wednesday that will be closely monitored for any further hints regarding the timing of an interest rate hike.

“The dollar should have a relatively easy time topping 124 yen, especially if Yellen sounds hawkish during the testimony,” said Junichi Ishikawa, market analyst at IG Securities in Tokyo.

In commodities trading, US crude slipped about 1.1 percent to $51.62 a barrel, pressured by reports that Iran was close to a deal with six world powers that would allow it to sell its oil again on the oversupplied world market.

A draft nuclear deal between Iran and six major powers calls for U.N. inspectors to have access to all suspect Iranian sites, including military, based on consultations between the powers and Tehran, a diplomatic source said on Tuesday.