MSCI’s broadest index of Asia-Pacific shares outside Japan was down 0.2 percent, while Australia’s market shed 1.1 percent. 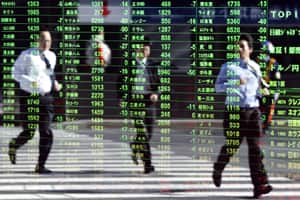 Asian share markets were on the ropes for a second straight session on Tuesday as investors waited anxiously to see if Beijing can head off the latest selling stampede in Chinese stocks.

MSCI’s broadest index of Asia-Pacific shares outside Japan was down 0.2 percent, while Australia’s market shed 1.1 percent.

“The price action reminds investors that the world is more connected than ever; volatility is likely here to stay, and liquidity may suffer if investor uncertainty worsens,” analysts at Citi said in a note.

All eyes were on China after stocks tanked on the first trading day of the year, triggering a “circuit-breaker” that suspended equities trade nationwide for the first time.

The CSI300 index of the largest listed companies in Shanghai and Shenzhen sank 7.0 percent before trading was suspended, its worst single-day performance since August last year when China was in the throes of another market rout.

Indeed, that August episode likely planted the seeds of the latest slide since authorities reacted back then by imposing a lock-up on share sales by major institutional investors.

That lock-up is slated to end in the next few days, allowing the sale of perhaps 1.24 trillion worth of shares, according to some estimates. Some are now wagering Beijing will extend the lock-up period given the severity of Monday’s dive.

Wall Street followed at first, but did recoup some of its losses going into the close. The Dow closed down 1.58 percent, while the S&P 500 fell 1.53 percent and the Nasdaq 2.08 percent.

A South Korean finance ministry official on Tuesday said the government will take action to stabilise markets if needed.

Sweden on Monday gave its central bank chief formal powers to act immediately to weaken the crown and help push up inflation, a radical step among developed world institutions.

Under Governor Stefan Ingves, Sweden’s Riksbank has already slashed rates to a record low of -0.35 percent.

The European Central Bank was under pressure to do yet more after German inflation proved surprisingly weak in December, pushing down bond yields and slugging the euro.

It had less luck against the Japanese yen which tends to benefit during times of market stress as Japan is the world’s largest creditor nation. The dollar was buying 119.25 yen after being as low as 118.68.

Worries about the global economy weighed on commodity prices with copper shedding more than 2 percent on Monday.

Oil was near flat having been up as much as 4 percent at one stage on Monday amid a developing dispute between Saudi Arabia and Iran.