Active vs Passive Mutual Funds: Passive is the way to go in large caps, experts agree | FE Manage Your Money

Fund managers Neil Parag Parikh and Anil Ghelani said on FinancialExpress.com Manage Your Money while investing in large-cap mutual funds, passive investing could be a better choice, since the active funds are losing the edge to generate alpha returns. 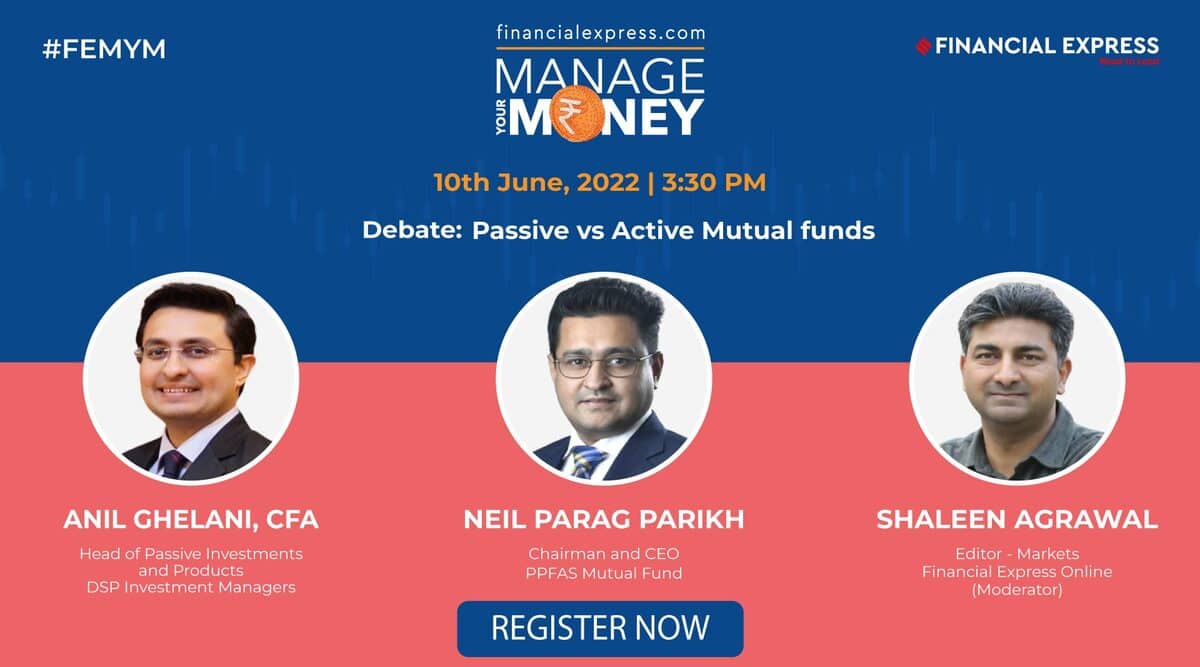 Active vs Passive Mutual Funds: Passive is the way to go in large caps, experts agree.

While investing in large-cap mutual funds, passive investing could be a better choice, since the active funds are losing the edge to generate alpha returns, fund managers Neil Parag Parikh and Anil Ghelani said on FinancialExpress.com Manage Your Money. Neil Parag Parikh, who is the chairman and chief executive officer at PPFAS Mutual Fund, and Anil Ghelani, who is CFA and head of passive investments and products at DSP Investment Managers were speaking at a debate on ‘passive vs active mutual funds’. They however noted that risks remain on both sides.

In the debate, both panellists Parikh and Ghelani concluded that investors should look at small and medium cap investments to earn alpha returns in mutual fund portfolios. In active mutual fund investing, investors rely on fund managers to actively make judgement calls and make choices that beat the market. While, passive funds mimic performance of benchmark indices such as NSE Nifty 50 and give investors proportionate returns.

Giving a recent example of new-age tech IPOs, Neil Parikh said five-six months ago, the loss-making new tech companies were coming into the benchmark index and were forming a bigger part of the index. However, at such moments it’s the judgement of a fund manager that comes into play to avoid those potential risks of downside.

“In the dot com boom in 2000-2001, one third of the market was tech stocks. Now just by avoiding those one-third stocks, at those frenzied times, you would have got an alpha and that alpha would have been continuing today. In 2007-2008, a lot of infrastructure, real estate and power stocks came; as active managers we can avoid such companies, basically avoid the downside in that sense,” Parikh said, explaining that alpha returns in investing are also made through avoiding huge losses.

The debaters however agreed that for large-cap companies, passive investing is a more ideal choice since it avoids the risk of human bias and gives returns that are in line with how larger markets have performed. “In Indian markets, we could see a much more enhanced utilisation of passive strategy especially in the large cap universe. In small cap space, we still have scope for research analysts and fund managers to express his/her opinion and outperform the benchmark,” Anil Ghelani said. “But I strongly believe in large cap space, passive funds are there to stay, are here to grow, and must form part of any investor’s portfolio,” Ghelani, who was speaking in favour of passive investments, added.

“The recent trends in the market, which is changing at a fast pace, could be resulting in a tilt towards passive investing. (And it is) only because of faster moves within sectors. Each fund house has a different approach and everybody is not so nimble and agile to move across sectors in a fast way. (This is ) when passive could be a better choice,” Ghelani added.

“There are certain pockets where passive makes more sense in the Indian context. In large cap space, I think passive makes more sense to invest,” Neil Parikh said. “But because of liquidity concerns after the first 50-100 stocks, liquidity goes off the cliff, they are thinly traded beyond that, there are circuit breakers. Sometimes tracking error goes a little higher after the first 100 stocks, I think there people can invest actively and get that alpha that they desire. Passive works well in mature indexes, which are highly liquid,” Neil Parikh, whose firm only runs active mutual funds, said.

“The two factors that are important for us as active mutual fund managers are one, avoiding the bad companies and two, choosing good management. We do that and are pretty confident to beat the index overall longer term,” Neil Parikh said. Herding works really well in other parts of our lives, such as being part of a community, but in investment it works against us. So conventional wisdom tells us to be against the herd, or in things which are too fancy, that’s where you make money, Parikh said.