75 years of Independence: Sensex from 100 to 59000, gauge for an undervalued stock called India

As we celebrate the 75th year of independence, a look back at Sensex narrates the tale of how India has grown from strength to strength. 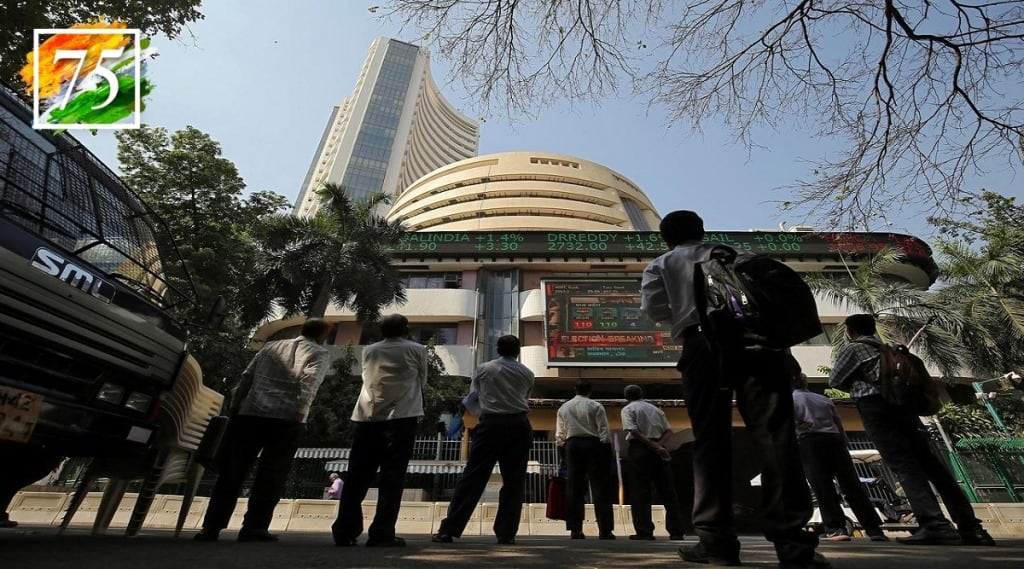 As is rightly said, the stock market of any country is the barometer of its economic growth, the story for India is no different. As we celebrate the 75th year of independence, a look back at Sensex narrates the tale of how India has grown from strength to strength. Started in 1986 on the BSE, Sensex is a free-float index consisting of 30 of the biggest listed companies in India. The BSE Sensex has grown from 100 points to 59,000 today; and while marred by volatility and bears, the index has posted robust growth, a testament to the country’s economic growth and future potential.

Sensex has helped investors pocket strong returns over the years. “Since its beginning in 1979 (base year) BSE Sensex has moved from 100 to 58000 (Now 59000) in the last 43 years. This is a CAGR of 16%, which is envious for any other asset class in the world,” Amit Jain, Cofounder, Ashika Global Family Office Services, told FinancialExpress.com.

However, the journey of the index has not been anywhere close to smooth. Stock markets in India faced turbulent times during 1991-1992. First, the index faced challenging times during 1991 when the Indian economy was liberalised. During this phase bulls and bears continued to play tug of war. During the period Sensex even rose sharply helped by the infamous Harshad Mehta scam. In 1992 all came crumbling down when Sensex tanked more than 12.7% in April of 1992 as the news broke about market manipulation.

Even in the early 2000s the Sensex faced many turbulent days. On May 17, 2004, the index saw the market-wide circuit filters get breached for the first time. In the first 20 minutes of trade, Sensex tanked 11% and trading was suspended for an hour. Even after the resumption in trade, the mood remained bearish, erasing investors’ wealth by Rs 1.31 lakh crore. In 2006 too Sensex fell sharply leaving investors poorer by Rs 2.21 lakh crore. The 2000s were rocky, also due to the financial crisis of 2007-08. During this period Sensex tanked on numerous occasions, including a 1,408-point fall in January of 2008 and another 1,070-point tumble in October of the same year.

The most notable crash after the financial crisis came on January 6, 2015, when Sensex plummeted by 855 points in its worst crash in five and a half years. The index continued to face occasional turbulence in the years to come but the major crash after this was in 2020 when the globe panicked sitting at home owing to the covid-19 pandemic. On 23 March 2020, Sensex witnessed a bloodbath as the index nosedived 3,934.72 points or 13.15%. There have also been bright days on S&P BSE Sensex and not just gloom. Similar to its falls, Sensex has also risen by even more than 5% in a single day as recently as February 1, 2021.

Sensex is one of the two benchmark indices in the country and is still a favourite among old-timers. “The Sensex is one of the two prime indices and for historical reasons, a favourite of the old-timers who still talk this language. Since it’s a relatively concentrated index, it has possibly a slightly higher variation over periods where broad markets are not linear relative to Nifty. However, it remains a premier index for benchmarking purposes,” Sandip Raichura – CEO of Retail Broking and Distribution & Director, Prabhudas Lilladher, told Financial Express.

The prominence of Sensex and equity markets as a whole has grown over the years. The recent participation of retail investors has aided the domestic market in staying relatively unfazed. “As of today, the Indian stock market is down only -5% from its peak despite almost Rs. 4 lacs crores being sold by FIIs in the last 14 months. Hence, we can say that the significance of Sensex has increased tremendously over the last 10 years, as now Indians start believing India’s growth story and has replenished all withdrawals by FIIs with their own savings,” Amit Jain of Ashika Global said.

Jain adds that it is a moment of pride for the Indian economy to cross $3 trillion post 75 years of Independence and sees Sensex and stock markets as a whole as a contributor to that growth.

Although Sensex has been resilient, the total returns of the index have been even better over the last 10 years. S&P BSE Sensex Total Return Index has given 14.48% 10-year annualised returns in the last decade. This fares better than the 12.97% annualised returns given by Sensex.

Amit Jain believes the 16% CAGR of Sensex to continue, and expects the index to rally. He sees India as an undervalued stock with a lot of potential. “If we take India as stock, then we believe this outperformance of Indian markets will continue at least till year 2030,” he added. In the next one year, he sees Sensex breach the 65,000 mark touching fresh highs. “I believe India is the most “Undervalued stock” in the World even today, as this is the only economy which has the dual advantage of Democratic set up & demographic advantage, on which the world will rise in this ongoing decade of Year 2030.”

Not too far away are projections pinned by Sandip Raichura of Prabhudas Lilladher. His research team has a base case target of around 64,000 levels on the Sensex by June 2023 and a bull case scenario of 72,000 odd levels.