Must Read
RIL Q2 results preview: Jio, Retail likely to drive bumper net profit, O2C biz to be muted
Samsung Galaxy Watch 5 and Watch 5 Pro review: The best Android smartwatches you can buy in India today
S&P 500 down by over 22% in 2022: This is where it may bottom out
Bigger worries pounding exporters to Europe than concerns over currency
Pause slide

In addition to the obvious attraction of polyandry and village-sized family living under one roof, what amazes tourists is their self sustainability as all members worked in the same village including patriarch Chana and never ventured out for a living. 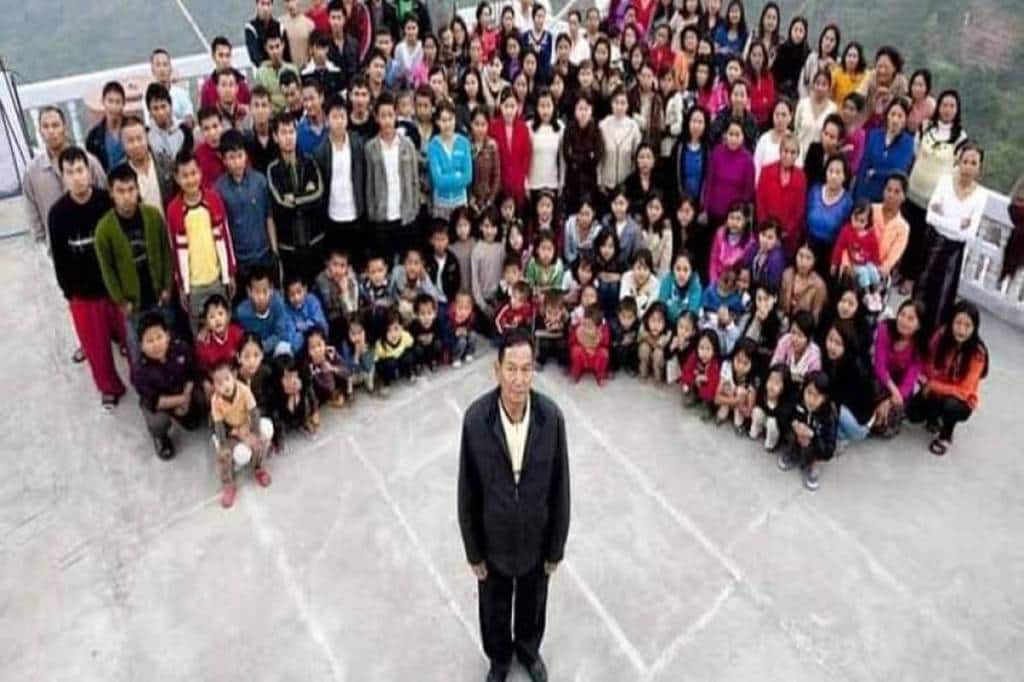 The sect grew most rapidly under the stewardship of Chana to approximately having 3000 followers all of whom inhabit the same village. (Credit: Twitter/@ZoramthangaCM)

Mizoram-based Ziona Chana who had arguably “world’s largest family’ recently died, survived by his 39 wives, 89 children and 36 grandchildren. The village house where the whole family lived in Mizoram regularly attracted tourists and journalists alike for whom Chana and his family were no less than a major tourist destination. In addition to the obvious attraction of polyandry and village-sized family living under one roof, what amazes tourists is their self sustainability as all members worked in the same village including patriarch Chana and never ventured out for a living. In an exclusive piece, the Indian Express dug into the history of Chana’s family, how the sect named ‘Chhuanthar’ (New Generation) which the family follows came into being and who will eventually succeed Chana as the patriarch of the house.

When did Ziona Chana come into the limelight?
HC Vanlalruata who is a local Mizo journalist came across the story of Chana and his sect Ziona in the year 2010. Soon after, the residence of the family “Chhuanthar Run” (New Generation House) was flooded with reporters from national and international media wanting to cover one of the most eye-grabbing stories. The New Generation House which reportedly accommodates all members of the family in over 100 rooms became a prime tourist spot of the state and is also mentioned on the state’s official tourism website. With the increase in the number of sect followers even outside the Ziona family, the area surrounding the family residence kept on getting inhabited by sect followers.

62-year-old HC Lalringthanga, a nephew of Ziona, told the Indian Express that media from the UK, S. Korea, Japan, Australia and many other countries visited the Ziona household frequently. Having become a tourist and media attraction, the ground floor was turned into a visitor’s area while the top three stories of the building houses the family members. While hundreds of media professionals and tourists frequented the area in the last 10-20 years only few were lucky enough to get an audience with Ziona himself who only spoke Mizo language and was reportedly shy and reserved.

Starting from Khuahtuaha, the sect grew in size and was succeeded by his younger brother Challianchana and eventually by his nephew Ziona Chana. The sect grew most rapidly under the stewardship of Chana to approximately having 3000 followers all of whom inhabit the same village.

Life of Ziona Chana family and followers
People from the sect swear by polyandry as a ‘divinely ordained’ practice while maintaining a distance from the mainstream life surrounding their village and following economic sustenance. Khuahtuaha and Challianchana also practiced polyandry but Chana took the practice to another level by marrying a total of 39 women in his lifetime. While the youngest wife of Chana aged 40, the oldest aged more than 70.

Vanlalpeka told the Indian Express that members of the family and sect maintain that polyandry had nothing to do with “sexual desire” and was purely driven by love. Vanlalpeka added that the claim of the family members must not be taken at face value as there is not much evidence to that effect. As per a research paper published by Vanlalpeka, during the time of Khuahtuaha, the church perceived the sect followers as sexually perverted, lots of immoral practices of the family members were abolished when Chana became the patriarch of the sect.

What does the family do for a living?
Most members of the family are highly skilled artisans including carpenters, utensil makers among others. The products produced by the family are sold out of the village and that is the chief source of income for the family, Vanlalpeka said. Even Ziona Chana used to work in the fields beginning from the first ray of the sun well past evening, his nephew added.

Who will succeed Ziona Chana?
After Chana passed away on June 13, the buzz is increasing about the new successor of the sect. Even as two weeks have passed since his demise, the family is yet to name his descendant. Lalringthanga told the Indian Express that the atmosphere in the family was still very gloomy as all loved Ziona like a God.