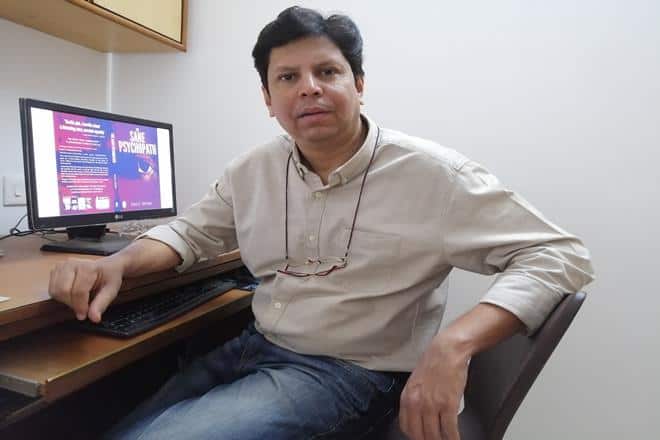 What drives human rage to a point of no return? This is a multi-faceted question that draws many debates and perspectives. On April 13, many Indians woke up to the shocking news of a car driver dragging a toll plaza employee who hung to the bonnet of the vehicle that was traveling at a speed of 100 kilometers an hour. The toll plaza employee was quoted later by ANI, saying that the car driver asked, “You will stop my car? Even the police don’t stop my car.”

Worldwide, these are incidents that are on the rise and now India to is no exception. While psychiatrists and criminologists view this with multi-faceted problem-solving strategies across the world, writers and filmmakers take a different route of exploring the turbulence that bubbles within the human mind, taking into account several complex variables that defy logic and rationale.

For the same reason, this disturbing trend can be best addressed by author and filmmaker Salil Desai, who received critical acclaim for the Inspector Saralkar series and more recently, his crime thriller ‘The Sane Psychopath’ published by FingerPrint Publishing! His crime thriller was inspired by a real-life incident and through this, the author created a gripping narrative about a soft-spoken and mild-mannered bus driver called Shankar Lande who goes on an hour-long mindless rampage in Pune, killing ten people, injuring 70 and almost wrecking a hundred other vehicles in the process.

Before we delve into the theme of your crime thriller, would you like to share how you feel that you have evolved in your journey as a writer with ‘The Sane Psychopath’ as compared to anything else that you have written before?

Most of my earlier books are murder mysteries, whereas with ‘The Sane Psychopath’ I set out to write something resembling literary fiction, in the guise of a thriller. This meant that I had to walk the tightrope between style and substance. Thrillers can’t be boring, predictable or heavy and literary fiction cannot be pretentious, shallow or underwhelming. I get a feeling I have succeeded and if so, then I suppose I have evolved.

Did you have several endings or had just one ending in your mind right from the start when you first began writing ‘The Sane Psychopath’?

The book is a fictionalized and dramatized account of a true incident, which occurred in Pune in 2012. As a fiction writer, my instincts told me that the story could never have an emotionally satisfactory ending, nor would there be any purpose served in stretching it into the realms of courtroom justice, because the judgment in the real-life case was already out. Therefore, I was more or less sure how I would end it unexpectedly right from the beginning.

Readers have either loved the ending or found it disconcertingly abrupt, which is exactly the impact I was hoping for. I am a cynical story-teller in some ways. Any other climax would have been dishonest from my point of view and perhaps anti-climactic.

Much of the story is about the inner tumult of a man who is finally driven to rage. What is it precisely that you wanted the readers to explore through the protagonist’s state of mind and the tragedy that unfolded thereafter?

At the heart of the book, is the disturbing phenomenon of what makes a hitherto normal man suddenly go berserk and explode into rampaging violence? Is it mental illness, is it something about the man’s personality, is it the unbearable misery of his circumstances or a lethal combination of all?

The question I was trying to address is whether this random mal-function of a random human being is symptomatic of a
larger dysfunction – a design flaw in the unforgiving way modern society operates.

What was the toughest part of writing ‘The Sane Psychopath’?
The toughest part was figuring out the right narrative structure, which combined the style of a thriller with the substance of literary fiction. It was incredibly hard. Apart from the core theme which I have already talked about, many other interesting angles presented themselves to be – the random nature of death, the terrible misfortune of the victims that they just happened to be in the disturbed driver’s path; attitudes to mental health; the nature of idealism, it’s genuineness and it’s hypocrisies; the corrosive nature of media outrage.

Also, the fact that city lawyers decided to boycott the accused and a defence lawyer had to be arranged from outside Pune made me squirm because if we are a law-based society then even the most depraved criminal is entitled to a legal defence. The theme provided me the perfect opportunity to write a different kind of book.

Any major dilemma on where to take the plot or how to craft some of the characters? Tell us about your favorite character in the narrative and what value does the character symbolize that helps you connect to him?

READ: Delhi’s 7th biodiversity park can be a game changer for other rivers in the country

The major challenge was how to weave together realism with drama, write fiction that did justice to facts and yet go beyond the horrific events to probe deeper because of the kind of misfits a society produces, gives us a clue of its impulses and fractures.

My favorite character in the book is Varun Gupte, the young, idealistic lawyer who takes it upon himself to defend Shanker Lande, the manic driver, in the face of a boycott by the city’s bar association.

In Varun, I’ve tried to create someone who is resolute but is constantly battling doubts about the loftiness of ideas. Moreover, he himself is unsure whether Lande is sane or insane, but believes strongly that the law is about justice, not simply a society’s
mechanism to mete out retribution.

What factors in the narrative helped you to decide how to take this book forward?

I think we live in an age of one-sided narratives. Extreme views are in vogue amplified by social media and TV. Moreover, the belligerence and noisiness of extreme stands have completely silenced balanced thoughts from being aired and debated. Nuance is in danger of disappearing from public discourse.

Those who think the rampaging driver is a demon want a truncated, short-circuited process of justice to hang the man for his horrific crime. In real life, on the other side, we have lobbies of bleeding hearts who take a shrill, extreme position on a criminal’s human rights.

They forget that victims and families can’t be so forgiving, and it is hypocritical to privilege a criminal’s rights above that of the victims.

And then there is the media and political parties which fan or twist public opinion in the name of public interest. So, in this circus, it is only fiction that can examine all sides of reality in all its complexity.

Any advice for young writers who want to write a thriller?

I think aspiring writers need to check whether they have a natural forte for the crime genre and focus on a sub-genre that suits their own style. Secondly, they should decide right at the beginning to go beyond the hackneyed stuff out there. Thirdly, they must strive hard to be original in terms of style.

Do you imagine writing, at some point in time, a contemporary political thriller or maybe horror?

Or, does the possibility of switching genres not appeal to you? In your opinion, is the Indian reader ready for these genres?

I have written stories in different genres, including ghost stories. My collection of short stories ‘Lost Libido and Other Gulp Fiction’ (2012) has all kinds of tales. Even within the crime genre, I have experimented successfully. My most successful series – Inspector Saralkar Murder Mysteries – are dark police procedurals – whodunits and whydunits – sprinkled with biting humor.

So, I am always looking to experiment. I think I would be most suited to switching to the humor genre – a combination of Wodehousian goofiness and great Marathi writer P.L.Deshpande’s earthy, tongue-in-cheek style. But I don’t know if humor as a genre by itself works in books anymore. It seems to have entirely migrated to the small screen.

Share with us about the one book you secretly wish that you could have written?

Dozens really so even though you have asked for one, let me list out five:
Gone Girl (Gillian Flynn)
The Murder of Roger Ackroyd (Agatha Christie)
No Orchids for Miss Blandish (James Hadley Chase)
The Code of the Woosters (P.G. Wodehouse) and
The Rise and Fall of the Third Reich (William L.Shirer)