Water, a biggest crisis points in the world today; Here is how?

Water, the elixir of life, has become one of the biggest crisis points in the world today. As cities and villages grapple with acute water shortage, some evangelists have a solution in the form of water ATMs. 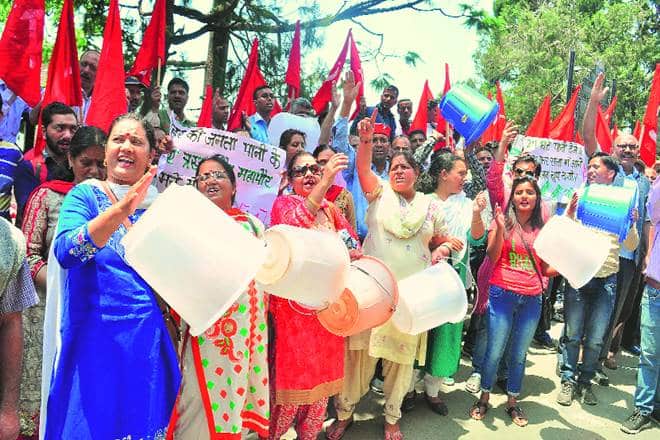 Locals protest against the acute water shortage in Shimla, which is experiencing its worst-ever water crisis (Photo: Pradeep Kumar)

It’s a hot summer afternoon in Delhi, with the sun beating down with all its fury. Thirty-four-year-old Pradeep Kumar, an autorickshaw driver, pulls over to the side of the road on spotting a water vendor. Dispensing water from a rickety steel machine, with a tap surmounted on the top, the vendor and many others like him in the city sell “chilled and pure water” at `2 per glass every summer. But is the water even safe? “I have no option, I can’t afford bottled water,” shrugs Kumar.

Water, the elixir of life, has become one of the biggest crisis points in the world today. As per Wild Water: The State of the World’s Water, a 2017 report by WaterAid India (an organisation which generates awareness about water, health and hygiene), around 63 million of the country’s 833 million rural population has no access to clean drinking water. If compared globally, the number is equivalent to the combined populations of Australia, Sweden, Sri Lanka and Bulgaria. The report, in fact, goes on to say that India is the worst country in the world when it comes to the number of rural people without access to safe water.

Data released by the government, in response to questions asked in the Rajya Sabha in February 2017, corroborates WaterAid’s findings. As per the statistics, of the 167.8 million households in rural India, only 26.9 million, or 16%, have access to safe drinking water.

The scenario in urban areas is no less worrisome. As per the Niti Aayog’s latest report, ‘Composite Water Management Index 2018’, 21 major cities, including New Delhi, Bengaluru, Chennai and Hyderabad, will run out of groundwater by 2020, affecting around 100 million people. In the index, which scored states on their water resource management practices, most states achieved a score below 50 (out of 100), signifying the need to urgently improve their water resource management practices.

Clearly, things need to change. And trying to bring this much-needed change are some entrepreneurs in the country who, with their respective ventures, are making clean drinking water a reality for people like Kumar. Their tool: water ATMs, which dispense clean drinking water at prices as low as `2-`5 a litre. Started on a pilot basis in metro cities, plans are already afoot to take these ventures into the interiors of the country soon.

Shahnaz holds two cannisters in her hand as she queues up in front of a water ATM at Savda Ghevra, JJ Colony in north-west Delhi. The 23-year-old is one of the numerous in the locality who now prefers to fetch water from this water ATM (installed by Piramal Sarvajal, a philanthropic venture of Piramal group, in 2013-14) instead of running behind a water tanker. “The water is much cheaper. It tastes better as well. The water from the tankers has a pungent smell, but in the absence of any alternative, we had to consume it. Now, we have these ATMs and they have been a huge help. More people are using them now,” she says. Piramal Sarvajal was seeded by the Piramal Foundation in 2008 to set up community-level water ATMs that are locally operated but centrally managed.

The firm, which leverages cloud-based technology to monitor its operations, currently has its presence in 16 states through 1,100 touch points.

Another such company is Delhi-based JanaJal. It was the problem of access to safe drinking water that forced its co-founders, Parag Agarwal and his brother Anurag Agarwal, to start the water ATM firm in 2013. From one water ATM in New Delhi in 2013 to over 300 installed across four cities—Ghaziabad, Mumbai, New Delhi and Surat—today, they have come a long way. The firm works with local administrative bodies and government agencies. Once the site is selected, and water and electricity connections authorised, systems are installed and operated by JanaJal—the water is priced at Rs 5 per litre. Running on solar electricity, these hybrid water ATMs have an in-built water purification system that purifies the water coming in from the source.

Explaining the origin of the idea, chairman and managing director Parag Agarwal says, “No one, from the top to the bottom of the administrative pyramid, wanted to address how critical the issue was. So we came up with the idea of a water ATM. People didn’t want water for free. They were ready to pay a nominal cost… it gave them a sense of pride and dignity.”

The three As—availability, accessibility and affordability—which form the nucleus of a JanaJal water ATM, helped the concept gain traction. In 2017, in fact, the Indian Railway Catering and Tourism Corporation (IRCTC), too, joined hands with JanaJal to operate water ATMs at various railway stations in the country. “The decentralised approach to dispense water was seen as a plus. The IRCTC, too, adopted the concept,” says 47-year-old Agarwal.

Then there is Swajal, a Gurugram-based water ATM firm, which started in 2012. Swajal has its footprint in 14 states, including Rajasthan, Uttar Pradesh, Madhya Pradesh, Chhattisgarh, Bihar, Telangana and Assam, with more than 400 water ATMs. The water is priced at `2 per litre and undergoes a nine-stage purification process, which involves IoT-based remote monitoring. “When we started operations, there was no one who thought of quality drinking water, forget providing it at affordable prices,” says Vibha Tripathi, co-founder and managing director, Swajal. “We were the early movers. So today, we can say we have the advantage over others, both in the technology we provide and the areas that we have covered. However, there is still a long way to go. The battle to provide quality water is not even half won.”

Another company fighting that battle is Pi-lo, a New Delhi-based water ATM firm. What started in 2015 as a pilot project at the Botanical Garden metro station in Delhi soon found many takers. Today, Pi-lo water ATMs can be seen at metro stations across the national capital region (including Botanical Garden, Pragati Maidan, etc), as well as at various archaeological sites (such as Humayun’s Tomb, Qutub Minar, etc) and railway stations across the country—the water is priced at `2 per litre. “In our early days, we approached the Delhi Metro Rail Corporation with our concept of providing safe water through ATMs,” says Vikram Budhiraja, CEO, Pi-lo. “We asked them to provide us with a small place for stationing the ATM, electricity for running and some advertisement space beside the ATM. Earlier, we used to bring purified water from our plant in Noida and fill the ATMs. This meant only 150 litres in one go. As metro stations started going underground and above flyovers, it became difficult to operate. So we switched to static ATMs, which have an in-built reverse osmosis (RO) mechanism, which can provide up to 250 litres in one go,” he says. Pi-lo also found support from Life Insurance Corporation (LIC), which provided them with advertisement space for a nominal cost on their buildings and other kiosks.

Today, the firm claims to have over 400 water ATMs installed across the country, reaching around six lakh people everyday just in NCR. The Pi-lo water ATM has an LED screen, which displays for the consumer the total dissolved solids level, pH level and temperature of the water they are consuming.

The firm is now in talks with the Union government’s Department of Production Engineering, which does the quality check for new technologies developed by companies, to raise an additional Rs 100 crore for its future plans. “Half of the amount, Rs 50 crore, will be funded by our own partners and board of directors, while the rest of the money should be granted by the department. They have seen our work and are aware of our technology. Our ability to save at least 90% of the water from an ATM is our biggest plus, unlike any other water ATM, which wastes almost 75-80% of the water. We have cleared the first level of the funding process and would clear the remaining as well,” hopes Budhiraja.

Hyderabad-based WaterHealth India, too, hopes to establish a strong network of its water ATMs in the country in the next two years. A subsidiary of WaterHealth International (a US-based company, which operates as a social business and provides drinking water to communities), it currently has more than 450 water ATMs installed across 36 districts of the country, including rural areas in states such as Andhra Pradesh, Telangana, Karnataka, Gujarat, etc—the water is priced at Rs 2 per litre. Recently, WaterHealth India received a $12.5-million (around `80-crore) loan from the US’ Overseas Private Investment Arm (OPIC) to install 900 decentralised ATMs to purify water on the spot and sell it to consumers at prices three-four times lower than bottled water alternatives. “We have received the first tranche—$3 million—from OPIC,” says Vikas Shah, chief operating officer, WaterHealth India. “The fund will be provided in three tranches based on the work we do with it. We have already started utilising the funds to set up more ATMs across the country. The next tranche should be coming in soon,” he says.

The organisation has won tenders to set up water ATMs in slums across Delhi-NCR, as well as at railway stations across the country. Talking about their future plans, Shah says, “We plan to focus on the Golden Corridor—those states or regions where there is a great need for safe and quality drinking water, as the water available there is greatly contaminated. The corridor starts from Rajasthan, passes through Gujarat, Maharashtra, parts of Madhya Pradesh, Chhattisgarh, Telangana, Andhra Pradesh and Tamil Nadu. In the first phase, we plan to focus on these territories.”

With the concept gaining traction in the country, water ATMs could well provide the much-needed water cure.