Three years ago, a theatre group from Sri Lanka came to the famous Under the Sal Tree festival at Goalpara in Assam to stage a play—Payanihal (Passengers)— that seeks reconciliation between the Tamil and Sinhalese communities. 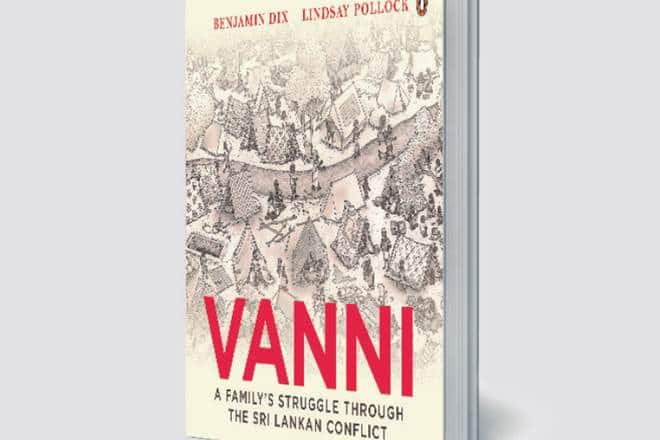 Described by its authors as a “non-fiction-fiction” to secure the identities of its characters, Vanni chronicles the long conflict and refugee crisis while pointing out serious human rights violations by both the rebels and the military.

The devastating civil war in Sri Lanka and its catastrophic consequences have been the subject of several works of art in recent times. From books to cinema and poems to paintings, the humanitarian cost of the war has been captured in the arts in some depth. In May this year, Tamils of Lanka: A Timeless Heritage, a multi-media exhibition in London, marked the 10th anniversary of the end of the conflict through memories of survivors. Ruins, a 2016 novel by Melbourne-based Sri Lankan author Rajith Savanadasa, dealt with the civil war through a Colombo family’s troubles in the last days of the conflict.

Three years ago, a theatre group from Sri Lanka came to the famous Under the Sal Tree festival at Goalpara in Assam to stage a play—Payanihal (Passengers)— that seeks reconciliation between the Tamil and Sinhalese communities. In 2017, Demons in Paradise, a documentary by Jude Ratnam, a former Tamil human rights activist in Sri Lanka premiered at the Cannes film festival, delivered a rare criticism of the Tamil rebels from its own community. In 2015, the conflict drew international attention when celebrated French director Jacques Audiard’s Dheepan, which portrays the struggles of a Lankan refugee couple in a Parisian suburb, won the Palme d’Or at the Cannes.

Now, there is a thought-provoking addition to the works of art on the Sri Lankan civil war. While Dheepan ends with the Sri Lankan couple beginning a new life in London, Vanni, a new graphic novel on the island nation’s conflict, starts from the streets of the British capital. The book shows Antoni, a Sri Lankan refugee and cab driver in London, listening to his passengers heaping praise on his “beautiful country” of “crystal clear ocean, palm trees, incredible beach-side resorts and cocktails by the pool”. “You must miss it, man. In weather like this,” a Briton tells an expressionless Antoni inside the artificial comfort of his car while driving in the chilling January cold of London.

Antoni’s thoughts are revealed in a series of flashbacks that follow the conversation in the cab. Born into a Tamil Christian family in Sri Lanka, Antoni lost his father in the 1983 riots in Colombo. His brother Ranjan soon signs up with the Liberation Tigers of Tamil Eelam (LTTE), who were fighting for a separate country for the Tamils. Antoni marries Rajini, a Hindu, and raises a family. But he soon finds out that raising a family in Chempiyanpattu, a tiny village in the LTTE-controlled Vanni on the north coast of Lanka, in the times of civil war is fraught with peril.

Written by Benjamin Dix, a former United Nations employee in Sri Lanka during the civil war, and illustrated by British artist Lindsay Pollock, Vanni is a powerful commentary on the unimaginable sufferings of ordinary people in a war zone. For families like those of Antoni’s, the nature, rebels and the military form a mighty force directed towards destruction. During the conflict, Chempiyanpattu is hit by the December 2004 Indian Ocean tsunami and goes on to become a government-designated relief camp. However, with the war intensifying in the north after the new Mahinda Rajapaksa government assumes power in 2005, Antoni and the villagers would be uprooted again.

Described by its authors as a “non-fiction-fiction” to secure the identities of its characters, Vanni chronicles the long conflict and refugee crisis while pointing out serious human rights violations by both the rebels and the military. In fact, one of the main reasons for Dix to write down his experiences in Sri Lanka was the inability of international community to investigate the war crimes and hold those accountable. “Through the research, development and production of this book we have tried to illustrate an experience of what modern-day conflict looks like — in its raw brutality,” says Dix, who was among the last UN employees to be evacuated from Vanni in 2008, in the afterword to the book.

Dix, who suffered post-traumatic stress disorder upon his return to home in London,  initially wanted to write a “30-page comic book in three to five months” about the Lankan tragedy. Instead, it took him and Pollock seven years to complete their work, which received the financial support of the Arts Council of England. Dix’s work on the book has also led him to launch the not-for-profit Positive Negatives for international collaborations between artists and the academia in adapting complex research into visual arts. With the refugee crisis in conflict-ridden countries like Syria and Iraq grabbing headlines, Vanni provides an essential revisit to South Asia’s graveyard of memories. But if this week’s election of Mahinda Rajapakse’s brother Gotabaya Rajapaksa — the defence minister during the civil war — as Lanka’s new president is any indication, whether cases of human rights violations will be reopened is anybody’s guess.
The writer is a freelancer

Follow us on
Latest News
Amazon Photos for Android gets major redesign: Here’s what’s new
The T20 of Naya Pakistan 2.0
Realme 10 5G to come with 50MP triple camera, Mediatek Dimensity 700: Report
Citizenship Act: MHA empowers DMs of 31 districts in 9 states to grant citizenship to non-Muslims from Pakistan, Bangladesh, Afghanistan
Smartworld Developers partners with Schneider Electric for home automation
MediaTek Dimensity 9200 launched; set to power Vivo X90, upcoming flagships from Xiaomi Oppo, others
Sundram Fasteners Q2 profit muted due to inflationary, input cost pressure
Photos
Lunar Eclipse 2022: Did you get a glimpse of Chandra Grahan? This is how the Moon appeared in different parts of the world
15 hours agoNovember 8, 2022
Happy Guru Nanak Jayanti! A festive look into the celebrations from across the nation
21 hours agoNovember 8, 2022
Dazzling & Astounding! Proposed design of the to-be redeveloped Dakaniya Talav Railway Station in Rajasthan-PHOTOS
4 days agoNovember 5, 2022
Read More
×
NASA moon mission eclipsed again, rocket launch delayed owing to storm menace
Eating healthy to working out: Here’s how you can keep your heart healthy
7 Clever and creative ideas for the most graceful corner décor in your home
Veganism shows up as one of the most attractive interests on dating apps for young adult daters in India
The women’s footwear industry in India is set for a monumental shift, says Virender Kumar, Chere
Sleeping disorder in male linked to fertility issues