West Bengal temples always bring to mind the distinctive chala styled roofed structures with beautiful terracotta plaques on walls and pillars, it was not so during the ancient and early medieval times. 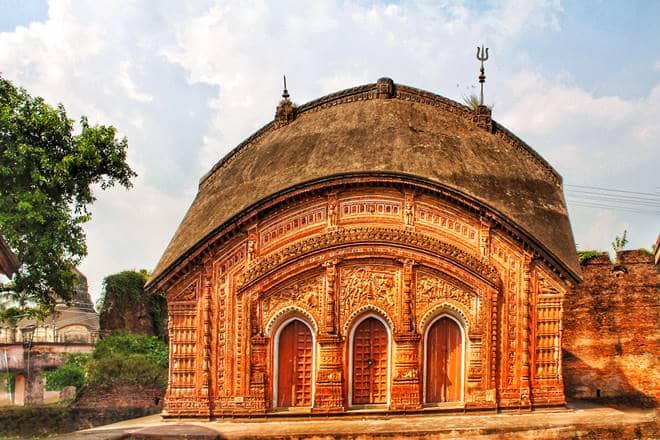 Clay has been in constant use from the pre-historic times, and is considered as among the oldest building materials. To add longevity to the objects or buildings being built using clay, baked clay or terracotta came into vogue, and being lighter in nature has been widely used for architectural purposes across the world. In West Bengal, while baked clay objects have been in regular use from ancient times, exquisite terracotta temples gained popularity during the Hindu Revival period under the Krishna bhakti movement that lasted for three centuries, 16th – 19th century CE. While West Bengal temples always bring to mind the distinctive chala styled roofed structures with beautiful terracotta plaques on walls and pillars, it was not so during the ancient and early medieval times.

From the various temples that still remain, it is evident that stone was the primary material of construction during the ancient and early medieval eras (mainly the Gupta and Pala-Sena era). The use of terracotta in West Bengal started in ancient times with the making of objects used in daily lives, such as, cooking utensils, jars, toys, and seals, to small decorative plaques; and finally evolved into being used for temple constructions from the early modern era in 15th-16th century CE. Stone as a building material got replaced mainly because of the easier availability of clay in a state that has an abundance of clayey soil from its many rivers.

When discussing Bengal terracotta temples, the first name that automatically comes to mind are the famous ones at Bishnupur.

However, West Bengal is scattered with many such beautiful terracotta temples that are spread across the state; though, sadly, many of them are in a dilapidated condition owing to complete neglect and apathy. Among the rather unique terracotta temples of this state are the Char Bangla temple and the Gangeswar temple, both situated in Baranagar.

Baranagar, once the capital of Rani Bhavani of Natore (1716-1795) falls in the Murshidabad district. Under the Rani, Natore was at that time considered among the wealthiest of all Bengal zamindaris, with an annual income of 1.5 crores, a part of which the queen donated towards various charitable causes. While shifting her capital to the western side of the river Ganges, Rani Bhavani decided to build 108 Siva temples in Baranagar, with the aim of turning the place into a second Varanasi. Built between 1753 to1760, many of the temples built by the queen are now lost owing to a change in the course of the river Bhagirathi that engulfed the structures. Among the ones that survived are a cluster of four two-chala temples known commonly as the Char Bangla temple, and the other is a jor bangla temple known as Gangeswar temple, and both are under the purview of the ASI.

The Char bangla temple stands on a 1.5 feet high base, with its four temples showing two roofed Bengal chala (do chala), thus giving it the name of Char bangla, a unique style not seen elsewhere. There are three doors to each temple, with three shiv-lingas in the sanctums. Of the four, three temples share a common platform, while the northern temple stands separate. The northern temple of the Char Bangla is the richest in terracotta ornamentation, reflecting different episodes of Puranic stories, stories from the Ramayana and Mahabharata, narratives from the Krishna-leela, different forms of the mother goddess, and daily scenarios from the village lives. Among the different plaques on the northern temple there is a beautiful depiction of Shiva sitting on a platform, while his two devotees Nandi and Bhringi are shown busy preparing hookah and bhaang for him. The western temple has a beautiful central arch depicting Ravana. The eastern temple is also unique as it shows stucco works, unlike the terracotta work seen in the others; however, the stucco work was made by etching method, which is found elsewhere too.

About a kilometer away from the Char Bangla stands the Jor Bangla temple also known as the Gangeswar temple. In Bengali, jor means a pair and the Gangeswar Mandir shows two identical ek-bangla mandir style, which gives it the name Jor Bangla. The temple complex comprises of three temples dedicated to Shiva, namely the Gangeswar, Kastureswar, and Nageswar temples. These temples show intricate terracotta ornamentation and rest on three archways. Unlike the Char Bangla temple, in the Gangeswar temple, the spaces above the arches noticeably depict nothing from the epics or Puranas, but show only horses and other floral patterns. However, the temple pillars and walls have exquisite terracotta plaques that depict stories from the Ramayana and Krishnaleela. On one of its pillars is depicted on terracotta the story of Ram offering his eye to goddess Durga. Here the mother goddess is with innumerable hands, which is a rarity in temple sculptures.

Travel tips: Murshidabad lies about 220 km away from Kolkata and is well connected by trains and roads. The nearest railway station is Azimganj with direct train connections from both Howrah and Sealdah stations. There are many SC and non-AC standard hotels in Azimganj and Jiaganj if one wishes to stay. The best time to explore these temples is during the winter months.