Visit temples of Jhalrapatan in Rajasthan, where history comes alive

Owing to the profusion of mithuna sculptures, Cunningham had mentioned it as being similar to that of Khajuraho. 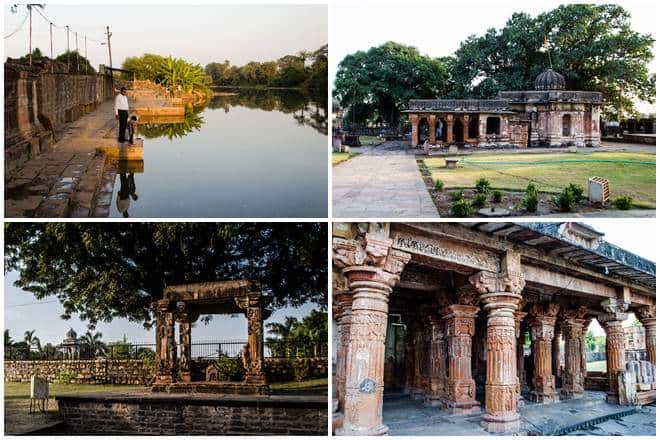 Said to have been founded by Chandrasen, a Parmar ruler from Malwa, Alexander Cunningham believed this ancient Chandravati was once the capital of Ptolemy’s ‘District of Sandrabatis’ at the beginning of the Common Era. (Images by Monidipa Dey)

The town of Jhalrapatan (the city of bells) located in the Jhalawar district of Rajasthan, is fairly of a modern lineage being founded in 1796 by Zalim Singh, the then chief of Jhalawar. A unique feature about Jhalrapatan is that the entire township remains within the confines of an old wall that was built to safeguard the trade caravans, as this was one of the major centres in the 18th century trade route. However, the relatively modern township, situated by the side of an artificial lake and built as an 18th century trade centre, lies very close to an ancient site, known as Chandravati. Said to have been founded by Chandrasen, a Parmar ruler from Malwa, Alexander Cunningham believed this ancient Chandravati was once the capital of Ptolemy’s ‘District of Sandrabatis’ at the
beginning of the Common Era. According to historical records, and documentation by James Fergusson, the town of Chandravati, which faced massive destruction during the Islamic invasions, once held 108 Hindu and Jain Temples, and the number is fully borne out by the many structural ruins and extant murtis found from the place. The ruins of Chandravati are situated on both banks of the seasonal river Chandrabhaga that flows through the site.

Also Read: Revealed! Just how much Taj Mahal earns and how many tourists visit the famed mausoleum

Among the remaining early medieval structures three temples stand as jewels, exemplifying the architectural style prevalent in the temples of Jhalawar in those times. These are: Chandramoulishwar Mahadeo/Sitaleshwar Mahadeva temple dated 689 CE; the Surya temple also known as the Padmanabh temple (10th century CE); and the Shantinath Jain temple (11th century CE).

Among the earliest built temples existing in Rajasthan, the Chandramoulishwar temple complex, holds the ruins of many temples, and is located on the banks of the Chandrabhaga river. The remains of the Chandramoulishwar Mahadeo temples give us a good insight into the temple architecture of early medieval times. The pillars with carvings, walls with niche-shrines, and the remaining sculptures are outstanding, reminding viewers of the skilled workmanship prevalent in the ancient times. The main temple while lacking the shikharas now, is rectangular with a dome on top (a much later imposition), and consists of a garbhagriha (sanctum), antarala (vestibule) and a mukhamandapa (entry porch). The sabhamandapa, which is a later addition of likely 9th -10th century CE, is a hypostyle hall that is supported on twenty-six beautifully carved pillars. There are distinct niche-shrines in cardinal directions on the outer walls of the sanctum. The podium mouldings of the temple are simple, showing a band of lotus-scrolls; while the mandapa pillars depict the ghata-pallava/purnakalasha motifs. The temple is dedicated to Shiva, as is evident from a Lakulisa carved on the lalatabimba and many shiva-lingas seen arranged in the mandapa. Among other ruined temples, dated between 7th -14th century CE, as seen in the complex, are that of Kalika Devi, Lakulisa, Vishnu, and a Varaha temple. A flight of steps from the temple ground leads one down to the old ghats by the river Chandrabhaga, and makes for a beautiful setting.

The 11th century CE Surya temple of Jhalrapatan is an exquisitely carved structure following the ratha style. A beautifully carved tall shikhara with many small miniature shikharas (bhumija style) adorns the sanctum top. The original roof shikaras of the mandapas are missing, and are now replaced with 18th century chattris and a dome, which unfortunately, are a complete mismatch with the original 10 th century CE architecture of the temple. The temple has a pillared mukha mandapa, a pillared mandapam, antarala, and a garbhagriha. As per local beliefs, until the middle of the 19th century the sanctum held a gold statue of the Surya/ Sun god, which was carried off by plunderers during the 1857 Mutiny. The pillars seen in the mandapas are richly carved with images of various deities and other figures. The outer walls of the temple are also exquisitely carved with many sculptures of the dikpalas, Surya, Ganesha, surasundaris, mithuna couples, and various miniature scenes depicting the lives of the common man.

Owing to the profusion of mithuna sculptures, Cunningham had mentioned it as being similar to that of Khajuraho. Presently the sanctum holds the murti of a four-armed Padmanabha placed in the 19th century, when the temple underwent extensive repairs and the typical Rajput styled chattris, and murtis of saints and monkeys were installed on the temple roof

Close to the Surya temple is an 11th century CE built Jain temple named as Shantinath Digambar Jain temple. The temple also has fine carvings, beautiful sculptures, and many murals that depict punishments being showered upon those who commit sins. The temple has two white elephants placed right at the entry point of the main temple.

Travel tips: Jhalawar is a small town and offers few options to stay, which include the Prithvi Vilas Palace, RTDC hotels, and a few more. Best time to visit the place would be from October to March, when it is cooler. Besides the above-mentioned temples in Jhalrapatan, Jhalawar also has the Garh Palace, Government Museum, and the Rain Basera to explore. The Palace timings are 9.00 am to 5.30 pm, and it remains closed on Fridays; there is a basic minimum entry fee to the Museum and its timings are 10.00 am to 5.00 pm. Jhalawar is situated at the edge of the Malwa Plateau, and the nearest airport is Jaipur and the nearest rail-head is at Kota.