Travel standing like bus or Metro in an airplane? Aviointeriors infamous ‘standing seats’ might make it possible!

Last year, at the same conference, Aviointeriors seized headlines with its Skyrider 2.0. Now it is back with version 3.0 and is ready to revolutionize the world of the aviation sector. 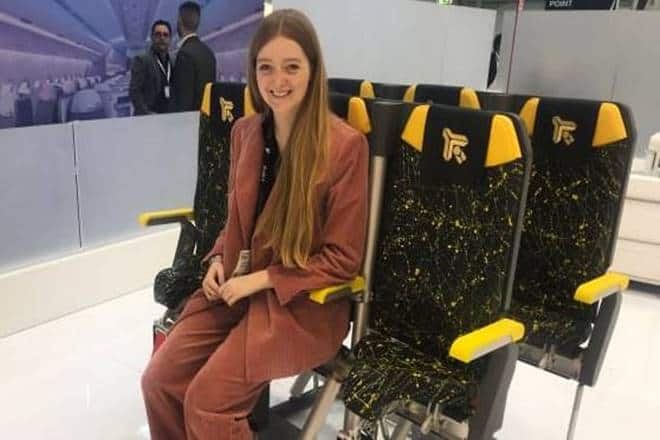 Presently, on display at the Aircraft Interiors Expo 2019 (AIX) in Hamburg, Germany is the newest version of the Italian seat manufacturer Aviointeriors’ legendary ‘standing seats’. Last year, at the same conference, Aviointeriors seized headlines with its Skyrider 2.0. Now it is back with version 3.0 and is ready to revolutionize the world of the aviation sector. Gaetano Perugini, the engineering adviser at Aviointeriors, keenly stressed that the concept is not about creating a ‘cattle class’ and cramming in more number of passengers. Perugini was quoted in a CNN report saying that they do not want to put thousands of people in the cabin, but want to offer a multi-class configuration, which is nowadays impossible if one wants to reach the maximum load of passengers.

Usually, the only way for an airline to reach the maximum capacity is outfitting their aircraft entirely with economy seats. The Skyrider takes up less space than the average economy seat, specifically just 23 inches, so airlines could cram in their economy seats, and still allow the other passengers to book other types of tickets on the same flight. So, in the same cabin, there will be standard economy, premium economy or business class and ultra-basic economy, which is an innovation for the airline as well as the passenger.

The design was first proposed back in the year 2010, but had some structural issues which prevented it from taking off. The second version, which premiered in 2018, evolved the design, featuring a pole in order to keep the seat in proper place. This new edition is pole-free and Perugini stated that 2.0 and 3.0 present two different ways in which the seat could be installed and put into viable practice. There has been a lot of interest in the seat, but no one has ordered them just yet. However there are a few hurdles to it as the specification of the A380 or the A320 or A321 or the 737 read that it is not allowed to be installed at a pitch of less than 28 inches, while the pitch of the Skyrider is 23 inches. Moreover, it does not seem well suited to every body type or any body type; whether a person is tall or short, he or she will ache and be uncomfortable. A human body cannot stay for eight or ten hours in this configuration, explained Perugini.

Also Read
Foreign destinations to visit from India on a budget
Ganga Vilas: All you need to know about the world’s longest river cruise that PM Modi will flag off on January 13
COVID Travel Advisory: India makes pre-departure RT-PCR compulsory for International travellers from 6 nations; Full guidelines here
Road trips for 2023: The roads very less travelled