The Lobkowicz Collection: Czech Republic’s oldest, largest and the most intact private collection

The Collection reflects the cultural, social, political and economic life of central Europe over six centuries. 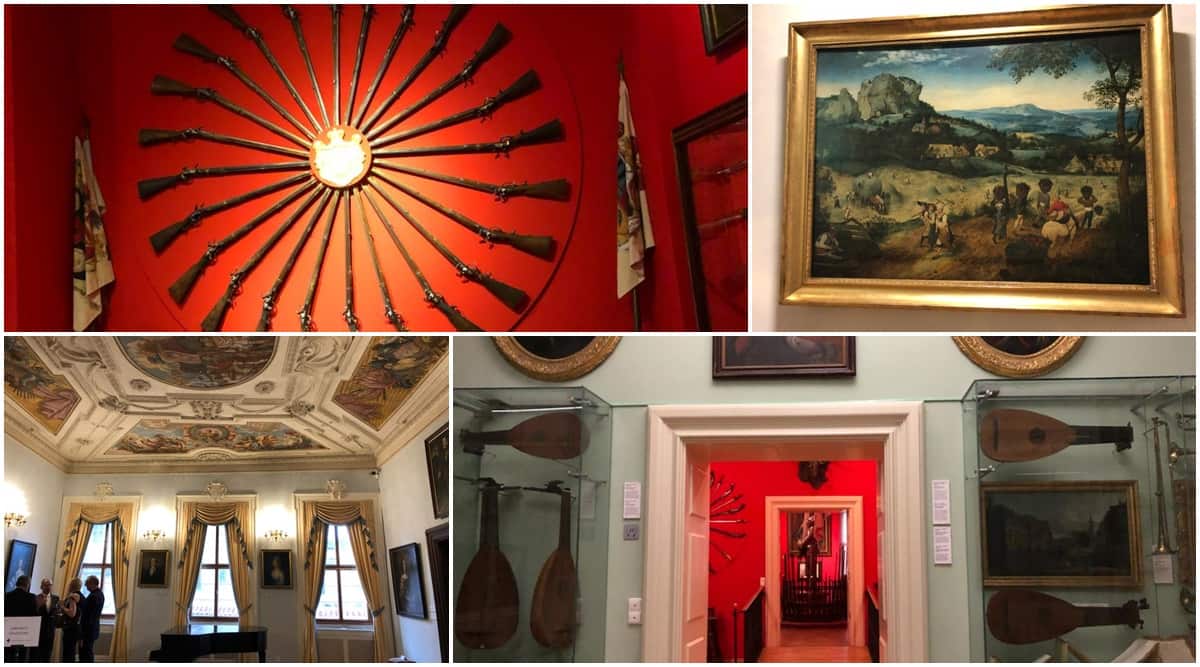 Of the approx. 1500 paintings in the Collections, it is the portraits that reveal most about the family’s participation in European political and cultural life.

In the 1530s during the rule of Ferdinand I, new King of Bohemia, Prague underwent a transformation that made it one of the most dynamic political, intellectual and cultural centers in Europe. This was carried forward by Ferdinand’s grandson, Rudolf II, who in 1583 officially moved the Imperial Court from Vienna to Prague, partly in response to the growing Turkish threat to the south. This attracted people of eminence of all hues, including politicians and diplomats, architects, scientists and doctors. It also made the city a magnet for painters, sculptors, printers and publishers and artisans. The result was a staggering Imperial collection, housed in the Prague Castle, which became the envy of every European ruler.

Several powerful families of Bohemia and Moravia came to Prague to compete for the emperor’s attention; however, not all of them shared the emperor’s political views. As in the rest of Europe, in Prague there was increasing friction between the largely Protestant nobility and the Catholic Hapsburg Court, where the Lobkowiczs, as Chamberlain and Chancellors, were playing an influential role. This political stalemate led to revolt of the Protestant Bohemian estates in 1618, and the Lobkowiczs found themselves at the center of the conflict. Two of the Emperor’s ministers were hurled from a window of the Prague Castle, who took refuge in the adjacent Lobkowicz Palace. Princess Polyxena Lobkowicz (1566-1642) is at the center of a painting where she is seen shielding the bloodied and bandaged men behind her, refusing admission to a crowd of Protestants.

The Lobkowicz castle came into the family through the marriage of Polyxena to Zdenek Vojtech, 1st prince Lobkowitz (1568-1628) who belonged to the Catholic or “Spanish” faction opposing the local Protestants. As Chancellor of the Czech Kingdom Vojtech was the ruler’s right-hand man. Polyxena was connected to powerful families throughout Europe and was noted for her political and diplomatic skills.

Following the outbreak of hostilities in 1618, the Protestants confiscated all Vojtech and Polyxena’s properties. It was a short-lived victory, however; in 1620 the Protestants suffered a decisive defeat at the Battle of the White Mountain, on the outskirts of Prague. This was only the beginning of the 30 years’ war, but for the Labkowicz family it enabled them to consolidate their influence and power base for the next three centuries. Apart from the art collections, it was the newly available and easy to acquire land holdings which ensured that the family would play a dominant role in Bohemia for centuries to come. The Nelahozeves Castle, bought by Polyxena in 1623 and the Roudnice Castle became one of the most impressive residences in Bohemia.

Around 1811, the Lobkowicz Palace was used as a hospital for soldiers wounded in the war with Napoleon. After WWI, 10th Prince Lobkowicz demonstrated support for the fledgling First Republic of Czechoslovakia by making several rooms at the palace available to the government headed by Tomas G Masaryk. In 1939, the occupying Nazi forces confiscated the palace along with all other Lobkowicz family properties. The palace was returned in 1945, only to be seized again after the Communist takeover in 1948. For the next forty years the palace was used for a variety of purposes, including State offices and as a museum of Czech history. After the Velvet Revolution of 1989 and the fall of the Communist government, President Vaclav Havel enacted a series of laws that allowed for the restitution of confiscated properties and the Lobkowicz Palace returned to the family in 2002.

Of the approx. 1500 paintings in the Collections, it is the portraits that reveal most about the family’s participation in European political and cultural life. Polyxena contributed a lot to the family’s meteoric rise, and her contribution to the collection reflects that. Ferdinand August 3rd Prince Lobkowicz (1655-1715) was the first true connoisseur of paintings in the family. The collection features world famous paintings by Bruegel, Canaletto, Bellotto, Cranach, Rubens, Veronese and many others.

The Collection also has a vast array of musical instruments as many aristocratic families acted as patrons of music, but few on the scale of the Lobkowicz. Ferdinand August 3rd Prince Lobkowicz, particularly, was accomplished on the lute and systematically collected music scores-a tradition that lasted three centuries. Today, the music archives contain more than 4000 manuscripts and printed scores, including music for lute, guitar and mandolin by composers like Jacques de St Luc, Charles Mouton and Jacques de Gallot. There is an unparalleled collection of musical instruments and autograph manuscripts of Mozart and Beethoven including copies of the 4th and 5th Symphonies. We saw trumpets by Micheal Lechamschneider, 1716, and a five-course guitar of the School of Sellas, 17th century.

It was revealed during the tour that from the late Renaissance until the land reforms of the 20th century, the great estates of Bohemia and Moravia, represented some of the best hunting grounds in Europe. The millions of hardwood trees planted by the landlords provided shelter for deer, wild boar and other game as without a diverse habitat, the animals that they hunted would not have survived, making them conservationists and environmentalists before these words entered our lexicography. The fantastically carved out hunting rifles are a testimony to the art of the time.

The family also has one of the finest private libraries in Central Europe which testifies to the monumental care and passion for books collected over generations. There are almost 65,000 volumes in Greek, Latin, Hebrew, Italian, Spanish, German, French and Czech, including 679 manuscripts. There is an extremely rare copy of the 48-line Bible, printed in 1462 by Fust and Schoffer in Mainz. Even more, there is a copy of St John’s Account of the Apocalypse printed in Nuremberg in 1498 by Anton Koberger.

The decorative arts objects include Chinese ware as by the late 17th century collecting oriental hand painted porcelain had become the norm de rigeur for many Europeans. The Dutch factories at Delft, with their tin-glazed earthenware, were early imitators of this luxury item. The late renaissance and early Baroque Italian ceramics are also on display. Among the woodwork are the 17th century Eger jewelry cabinets, which rank among the finest produced. The best furniture in the collection reflects the Central European love of the baroque, a style which lasted far longer there than in the rest of Europe.

The Lobkowiczs informed they have worked hard to preserve the collections after decades of neglect and need relocation to better storage facilities. Accordingly, the Nelahozeves Castle, about 35 km from Prague, is planned to be an international music and cultural center. Their unique collections of fine art, musical manuscripts, decorative arts, and historic books will be preserved in a dedicated storage building and the new international study center will be open to scholars, students and the general public. Its interiors richly decorated with frescoes, the castle is among the most beautiful renaissance buildings in the Czech Republic.

The nearby Baroque birth house of world composer Antonin Dvorak will also be brought to life with a new exhibition about the composer’s life and works, and practice space for music scholars. The seventh Prince Lobkowicz is known worldwide for enabling Ludwig van Beethoven to compose his most famous symphonies. The family obviously wants to build on the history of nurturing musical talent and patronage.

The Lobkowicz Library and Study Centre is planned to be an international center for the study of European cultural heritage, in partnership with international universities. Here students and scholars will not only read about culture but also be witness to history and culture come alive, as the gracious hosts, Aleksandra and William Lobkowicz, explained to us.

(The author is a former Indian Ambassador to Czech Republic. She tweets @nchauhanifsViews expressed are personal and do not reflect the official position or policy of Financial Express Online. Reproducing this content without permission is prohibited).