It is one of India’s highest [in terms of ground clearance] and longest ropeways soaring over 65 meters from the ground with longest span of 849 meters between two towers. 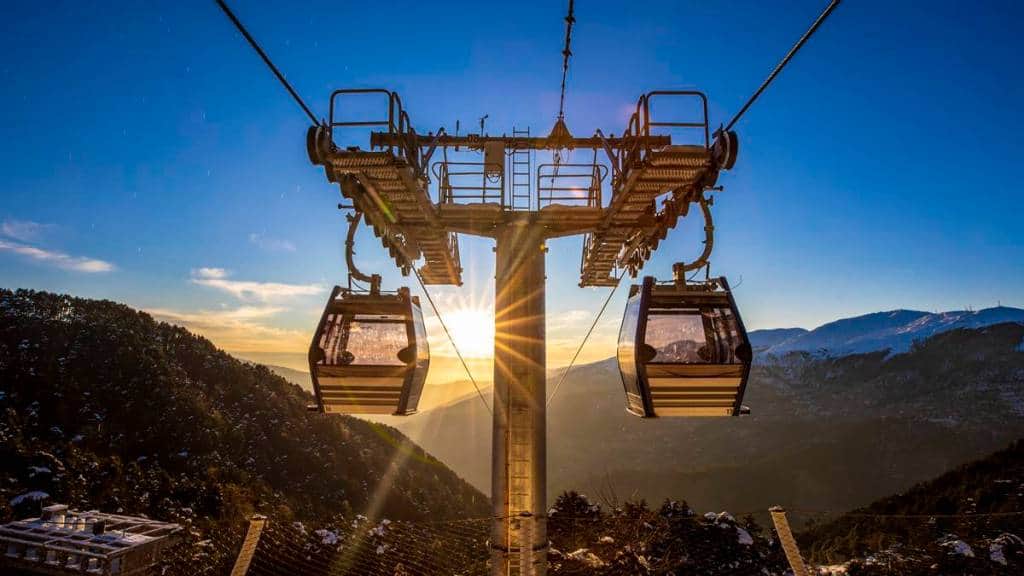 Located in the Shivalik belt of the Himalayas, Patnitop is a quiet hill station. Sitting at an altitude of 2024 M, Patnitop has attracted visitors with its mesmerising views. The ropeway in Patnitop by Skyview has added a new dimension to it and has been seen as a game-changer, in terms of travel, for this part of the Jammu and Kashmir UT. Skyview Patnitop is India’s highest ropeway and was built in a record time of 2.4 years under public-private partnership (PPP) model. The ropeway reduced travel time between the Sanget helmet and Patnitop from 1.5 hours to just 15 minutes. The ropeway is merely 90 minutes drive away from the pilgrim town of Katra, starting point for Shri Mata Vaishno Devi devotees.

Here are some of the features of Skyview Patnitop Gandola:

Talking to FinancialExpress.com Syed Junaid Altaf, Managing Director of Empyrean Skyview Projects Pvt Ltd said that the development of Ropeway and other infrastructure is set to boost tourism in Patnitop, J&K UT. “When it comes to tourism, ropeways are known to act as a catalyst and play a pivotal role in the overall development of a region and especially so for hill stations as they create central infrastructure assets,” he said.

When asked about what makes ropeways an asset in promoting tourism in hill states, Junaid Altaf said, “For us, there’s no better example other than Skyview by Empyrean Patnitiop. In fact, one of the major factors that goes in favour of building ropeway infrastructure is lower land acquisition costs, despite higher per km construction cost when compared to roadways it is still more economical. Added to this is minimum or no felling of trees along the ropeway line thus making it environmentally friendly and that they can be built faster in a straight line over a hilly terrain allowing for the least possible time to cover the distance.”

“Taking a cue from the Skyview Gondola in Patnitop, where not a single tree was felled, the Govt of UT J&K is now actively considering building a ropeway to the world-famous Shankaracharya Temple in Srinagar,” he added.

In 2019,  Skyview by Empyrean Patnitop became the flagship project of Empyrean Skyview Projects Pvt. Ltd., [ESPPL] built around the concept of moving people and not vehicles thereby reducing dependence on fossil fuel through development of ropeway projects. The big idea was also  to promote green mobility with a unique tourism destination around it as an integrated business model. This would be backed by providing international class infrastructure that would not only boost tourism but also provide the local community an opportunity for gainful employment and act as a catalyst towards overall economic development.

“We believe that this unique project has transformed Patnitop into a new tourist hill station with its state-of-art Skyview Gondola. Today, as we are faced with numerous environmental challenges, promoting sustainable tourism is the right way forward.  Over the next three years we, at Skyview by Empyrean, are looking at close to 700,000 passengers on the gondola itself which will help in reducing carbon footprint as more people will use this as a mode of transportation instead of driving up by road,” Junaid Altaf added.

Also Read | This stunning futuristic building in New Delhi is not an airport! Check details and images

Talking about supporting the economic development in the region, Junaid Altaf said, “Here, the ropeway has contributed to infrastructure thereby benefiting the local community- by providing locals employment during construction and now at the site; sourcing of fresh produce from nearby villages allows for economic benefit to local farmers and saving of food miles; and last but not the least -making Patnitop a more attractive tourist destination thus benefiting travel ancillary business – hotels, restaurants, guides and local transporters.”

Junaid Altaf said that projects under the PPP model are important for promoting tourism and developing infrastructure in the Jammu region. “Public–private partnerships are essential for development as they allow for participation by stakeholders in the development of tourism as well as implementation of programmes. Large areas in the region are protected areas and the land belongs to the government so it will be beneficial for private enterprises to join hands with the public bodies and build better tourism infrastructure, a win-win for all stakeholders,” he explained

When asked about Skyview’s plans to attract more tourism going forward, Junaid Altaf was optimistic. “Since Skyview by Empyrean offers many experiences at one destination, it appeals to a large base of customers. As the first of its kind holistic lifestyle and leisure destination in the Himalayas and indeed India it has transformed Patnitop into a new tourist hill station with its state-of-art Skyview Gondola that connects Sanget valley, an idyllic hamlet and the gateway to Patnitop, by way of a picturesque ride of over 2.8 kms of inclined destination in just 10-12 minutes. Our outdoor location in the Himalayas, just a two-hour drive from Jammu, is perfect for holidays/short breaks for families, small groups or even solo travellers who are driving down from Jammu, Katra or Punjab – Chandigarh, Amritsar or Pathankot or those taking short distance flights and trains from Delhi, Mumbai, Gujarat (Ahmedabad, Surat, Vadodara) and Kolkata. Visitors can spend an entire day here or up to 2-3 days filled with fun activities, shopping and bespoke immersive experiences.”

“The ropeway attracts customers of all ages, especially families and groups, who want to experience the exhilarating and scenic ride and partake from a range of good wholesome food from across India and the world in a clean and hygienic environment. The soft adventure activities as well as camping are for those who want to enjoy a rush of adrenaline and the joys of nature in the spectacular mountains surrounding Skyview,” he said.

“Our aim is also to cater to millions of tourists who visit nearby Katra for religious tourism- Skyview is situated just a 90 minute drive from the Mata Vaishno Devi Shrine in Katra. And as an added attraction for the spiritual tourist seeking an immersive experience in the Himalayas in a safe environment offering international standards of comfort and luxury we are also actively working on creating a religious circuit in and around Patnitop to include ancient temples such as Naag Mandir in Padora Chowk, Sudh Mahadev, Shiv Khori and the 8th century Hellenic influenced Pandava or Krimchi Temples close to Udhampur.  And for those looking to combine or extend their stay, there are several places to explore, namely Sanasar, Nathatop, Madhotop among others. Furthermore, we have plans to expand this property to 40-50 rooms over the next three years, with some at Patnitop so that various combination packages can be offered to guests. Plans include wellness options and three to four restaurants,” Junaid Altaf signed off.

More Stories on
Jammu and Kashmir Tourism
Travel and Tourism