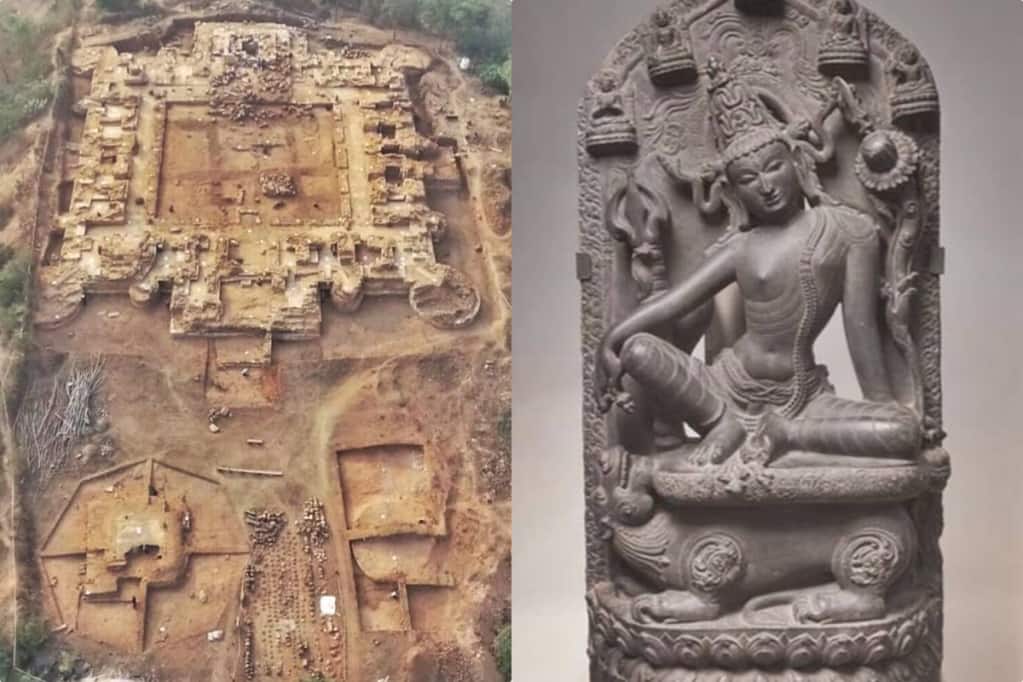 A drone photograph of the monastery atop Lal Pahari in Jaynagar anda sculpture unearthed there. (Image courtesy: Anil Kumar )

A recent discovery of two burnt clay sealings on the ‘Lal Pahari’ hilltop, 125 km east of Patna city has left researchers startled.. The sealing unearthed had carved on it in Sanskrit “śrīmaddharmahāvihārik āryabhikṣusaṅghasya” that means this is a sealing of monks council at Srimaddhama vihara. The script used dates around the 8-9th century.

Archaeologists suggest that the finding bear testimony to a Buddhist monastery of the early medieval period being located here. If these findings hold true then it would be the first such hilltop monastery to be excavated in the entire Gangetic valley. . The artefact found further suggest that the monastery was managed by a woman monk named Vijayshree Bhadra.

Findings from the excavation further strengthen the government’s efforts to resurrect a long-forgotten, prosperous city called Krimila that is believed to have been situated somewhere around present Lakhisarai.

Also Read
Passengers no longer will have to take out electronic devices from hand baggage at airport for scanning
Traveling to your hometown in Kerala on Christmas? Indian Railways announces 51 special trains to cater to festive rush
Flying high! Domestic air passenger traffic jumps 11 per cent in November
Check out these boutique experiences for a unique year-end holiday

Everything about the ancient town of Krimila

Krimila is believed to be a religious and administrative centre in Eastern India found during the early medieval times. It was famous for its stone sculptures and was frequently visited by travellers, ancient scholars and even the British.

The region got the attention of Major General Sir Alexander Cunningham, a British Army engineer who later founded the Archeological Survey of India. Cunnigham visited the place twice in the 1880s and recorded the presence of stupas, ancient temples in the site that was the confluence of River Kiul, old Ganges and Harohar. Accounts of Hiuen Tsang, the famous Chinese Buddhist monk-traveller was also cited in their record. Hwen Thsang noted that the place had a stupa of Asoka, monastery and had a special description of a place called Rajaona.

Images of Lord Buddha seated under the Bodhi tree, an image of Bodhisattva Padmapani, where other findings of Cunningham. Several other British explorers including J D Beglar and Buchanan explored the nearby villages of Valgudar, Rajaona, Chowki and Jaynagar for more insight about Buddhist dwellings in the place.

Anil Kumar, Professor and Head of the Department of Indian History Culture and Archaeology at the Visva Bharati University in Santiniketan contradicting British archaeologists explorations said they were focused on Tsang’s account, reported Indian Express. Findings of Indian archaeologists like D.C Sircar and R.K Choudhary brought important clues and the location of the important city there.

Exploration works by the government agencies to unearth the lost city started in 2009. An area of 72 sq km has been earmarked as the tentative territorial boundary of the city. A total of 60 sites will be excavated by the research team in due course out of which Lal Pahari, Bicchwe Hillm Ghoshikundu Hill, Sarsanda hill are state-protected.

So far the excavation team has found a large number of finished and unfinished sculptures of Brahmanical and Buddhist Gods such as that of Lord Parvati, Ganesh, Bramha, Durga and Buddha. Objects of ritualistic use and daily use items were also unearthed here.

Discovery of the two burnt clay sealings confirms that the site had a vihara with a significant woman or with a mixed population. The inscriptions on another sculpture of Singhnadavalokeshvara excavated earlier read that Vijayashri Bhadra, an elderly nun used to get donations from a certain Mallika Devi, who is believed to be a Pala queen, wife to Sura Pala, asserts Kumar.

In 2018, authorities temporarily halted excavation at the Lal Pahari after rumours of gold coins being found made rounds making the local rush to the site.