Kanwar Yatra: History of the pilgrimage associated with Shravan month

Kanwar Yatra, which was once a small affair, has now taken the proportions of a grand religious event in the last few decades, and the gathering involves almost 12 million devotees. 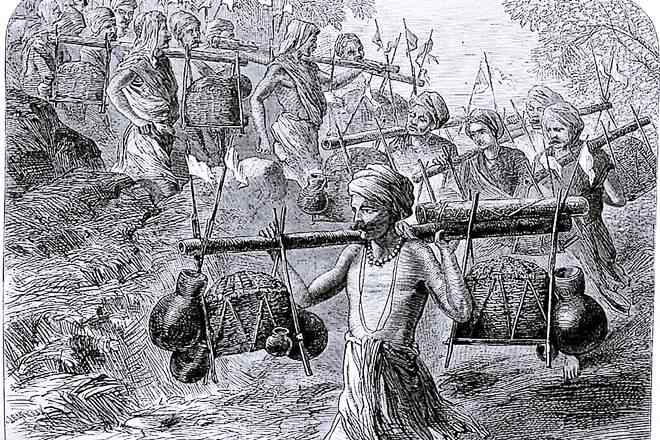 Within the realms of Indian religious consciousness, the tradition of visiting sacred places or teerths is deeply rooted, and goes long back into history. The Rig Veda and the Atharva Veda talk of teerths or pilgrim spots, while the Mahabharata speaks of many such holy places spread across the sub-continent, and the teerths increase in number in the Puranas. To a devout, these holy sites or teerths hold much greater significance than being just geographical locations on a map. A teerth yatri visiting a pilgrim spot hopes to end the suffering from the unending cycles of life and death, by the blessed aura of the sacred place.

Kanwar Yatra or Kanvad Yatra is one such teerth yatra or pilgrimage that takes places every year during the Hindu month of Shravan (July), when millions of devotees across north and parts of eastern India travel on foot or in trucks to pour the holy waters of Ganga on Shiva. The devotees first collect the sacred water of the Ganga from places such as Haridwar and Gangotri, and then walk to specific Shiva temples such as the Vishwanath temple at Kashi and Augharnath Temple in Meerut. Other temples popular with the pilgrims of the Kanvad Yatra are the Baidyanath temple of Deogarh- Jharkhand and Taraknath temple in West Bengal. Since the holy water is stored in pots and carried by the devotees on their shoulders on a bamboo pole that is known as kanwar, the devotees are also referred to as Kanwars or Kanwariyas, and the pilgrimage is termed as “Kanwar Yatra”.

Also Read | Exploring Kangra fort: One of the oldest forts in India

The act of carrying Ganga jal and pouring it on a Shiva-linga is based on the Puranic story of Samudramanthan. During the churning of the ocean waters (which occurred during shravan), along with various other things that came out of the ocean there also appeared halahal or poison. As nobody was willing to accept the poison, Shiva being magnanimous in nature, decided to consume it. The poison was held in his throat, which turned blue, owing to the burning effects of the poison. It is for this reason Shiva is also called as Neelkantha, or the one with a blue neck. Seeing the blue colour, Ganga jal was poured on Shiva which helped him to cool down from the burning poison. This practice of pouring Ganga jal on a Shiva-linga is still carried on as an annual tradition during shravan. There is another story associated with this pilgrimage, which says that Ravana, a great devotee of Shiva, used a kanwar to carry the holy waters of Ganga and pour it on Shiva in the Pura-Mahadev temple (Uttar Pradesh).

This had occurred during Shravan; hence the Shiva devotees follow the annual tradition of pouring Ganga jal on the Shiv-linga during Shravan. During kanwar-yatra Lord Shiva is addressed as Bhole Baba (one who is simple-minded), and the Kanwariyas chant Shiva slogans in a way of taking the name of Shiva. As someone who had grown up in Kolkata, there was no way I could miss this July walkathon undertaken by innumerable devotees clad in saffron with a gamcha tied to their waists, and balancing a well-decorated bamboo pole on their shoulders that held water-filled pots hanging at two ends. These walkers would undertake the long and arduous journey of almost 100 km to the Tarakeshwar temple. Interestingly in West Bengal, this age-old pilgrimage was earlier undertaken only by men.

However, after the major blockbuster movie titled “Joy Baba Tarakanath” was released in 1977, which featured the heroine making the pilgrimage to the Taraknath temple, women devotees too joined in large numbers chanting “bhole baba paar karega” along with the men. Jharkhand and Odisha also see these kesariya clad pilgrims carrying water to Shiva during Shravan. In Jharkhand, the Ganga-jal is taken from the Ganga at Sultanganj to be poured on Shiva at Baidyanath dham in Deogarh on a Monday. This 100 km walk is associated with Lord Ram who is believed to have undertaken the same pilgrimage on foot following the same route.

Kanwar Yatra, which was once a small affair, has now taken the proportions of a grand religious event in the last few decades, and the gathering involves almost 12 million devotees. The different states that see large gatherings of these devotees include Delhi, Haryana, Uttar Pradesh, Madhya Pradesh, Chhattisgarh, Punjab, Rajasthan, Jharkhand, West Bengal, and Odisha. The high numbers of devotees that walk or drive have made it compulsory for the Government of India and the different state governments to avail high-security measures on roads to ensure safety for the devotees. While the pilgrimage goes on for the entire month of Shravan, the special dates for this year’s pilgrimage are: 17th July for the Kanwar Yatra festival and 30th July for the Saavan Shivratri.