The Kailash Temple is situated at around 30 km from Aurangabad city, and regular bus and taxi services are available to take one to the heritage site. 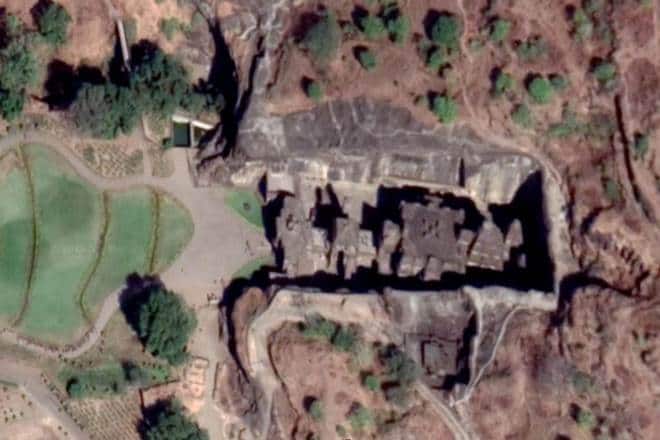 The Kailash temple at Ellora is the most remarkable of all cave temples in India. (Image: Google Maps)

The Kailash temple at Ellora, previously known as Manikeshwar, stands as a sculptural and architectural marvel of early medieval India and is the most remarkable of all cave temples in India. If it had not stood in a cluster along with the other cave temples by its side, perhaps it would have appeared even more remarkable and was likely to have garnered more attention and admiration from its viewers. A humungous monument, the temple is 200 ft long and 100 ft in breadth and height. It is carved out of a single rock! Interestingly, while the Kailash temple is loosely attributed as a cave temple, it is more a free-standing structure with its own open courtyard which is 280 ft long, 160 ft wide, and 106 ft deep at the back where the cliffs are the highest.

The largest and the most elaborate among the other cave temples within its vicinity, the Kailash has a number of subsidiary shrines that on a closer study shows an architectural style pertaining to different phases. The temple had once been painted in a style that was suitable to its elaborate architecture and sculptures. The paintings show signs of being renewed over time and again, but in a poorer style; however, a look at some of the remnants of the original/older paintings (porch roof) can easily place them at par with the Ajanta paintings. Kailash temple is generally attributed to the Rashtrakutas, particularly to Krishnaraja I (757-772 CE) based on some inscriptions. However, according to the two leading authorities on the Kailash temple, Herman Goetz and M.K. Dhavalikar, the temple as a whole lacks the homogenous art of just one ruler and is almost impossible to have been fully done within the 15-year rule of Krishnaraja I. Goetz in his research paper traced the different styles seen in Kailash temple to represent 8 architectural phases (from 8th to 13th century CE), which include 7 Rashtrakuta kings (starting with Dantidurga, who ruled from 735–756 CE) and 1 Pratihara king.

M.K. Dhavalikar in his paper attributed the main shrine and the gateway, the Nandi mandapa, the lower storey, the elephant -lion friezes, elephants in the courts, and the victory tower to Krishnaraja I (757-772 CE), thus justifying his name being associated with the temple in the famous Baroda copper plate grant of Karka II. Besides exemplifying the brilliance of the Rashtrakuta art, the Kailash temple in some parts also shows strong influences of the Pallava, Chalukya, and Chola styles.

READ: Bungee Jumping in Goa! Here is everything you need to know

As one reaches the temple premises, the temple itself remains hidden from direct view by a gopuram like stonewall that shows shallow pilasters and sculptures. A gateway is carved in the middle of this stone wall, which has an upper gallery with an overhanging eave. The gateway leads straight to the U-shaped temple courtyard that has a double-storeyed, 23 feet high, Nandi mandapa right in front. There are beautifully carved monolithic pillars standing near the Nandi mandapa that show elaborate mouldings and frieze work. A three-storeyed high pillared arcade goes around the courtyard that show large sculpted panels and niches with huge sculptures of different gods and goddesses, the most well-known among them being that of Ravana lifting Kailash, dancing Shiva, the three river devis, etc. It is believed that initially, stone bridges joined these galleries to the central shrine, but they are ruined now.

There are two stone elephants with broken trunks that stand in the courtyard near the Nandi mandapa. The main temple, which is built on a solid lower storey, has a 16 pillared flat-roofed mandapa at the upper level. In the centre of the flat roof of the mandapa is carved a large full-blown lotus, over which stand four striding lions. The mandapa has three porches or mukha-chatushkis on the north, south, and west sides, one of which connects it to the Nandi pavilion and the front gateway. From the eastern side of the mandapa an antarala or antechamber leads to the main shrine or sanctum. The antarala/antechamber is vaulted in form, and there is an image of seated Shiva with his ganas in the arched end. An open circumambulatory path for pradakshina goes around the sanctum/main shrine, with five subsidiary shrines that stand in the open along the pradakshina pathway.

The main sanctum holds a later period lingam placed by Rani Ahilyabai Holkar (1765-95), and the structure shows a pyramidal Dravidian shikhara ending with an octagonal dome. The main shrine walls have carved niches, pilasters, vatayans (windows) along with images of different gods, mithuna couples, and various other figures. The lower storeys of the main shrine and Nandi mandapa are both solid structures and filled with elaborate carvings. There are large elephants carved at the base of the temple that gives a feeling that these elephants are carrying the temple on their backs. There are elaborate miniature carvings of scenes from the Mahabharata and Ramayana at the base of the temple hall. This magnificent temple with its elaborate and exquisite carvings stands as a joyous celebration of the divinity of Lord Shiva.

Travel tips: The nearest city to the Ellora group of caves, which includes the magnificent Kailash temple, is Aurangabad. The Kailash Temple is situated at around 30 km from Aurangabad city, and regular bus and taxi services are available to take one to the heritage site. Aurangabad is well connected to the major cities of Maharashtra, such as Mumbai, Pune, and Nashik, via roads, trains, and air services.