India is majorly a hot tropical country, except for the Himalayan regions, so travelling in India is best done during the winters. 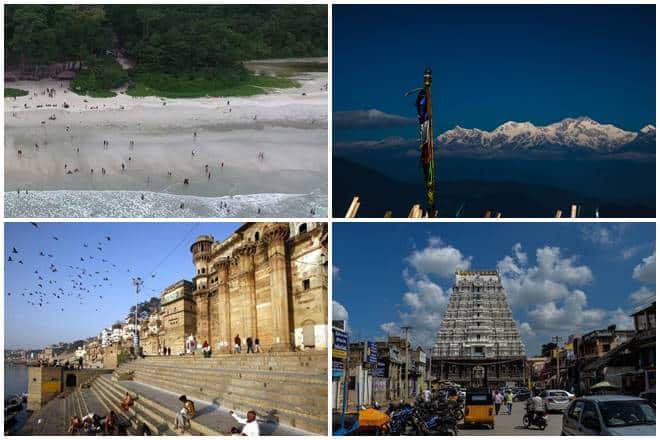 India has something or the other to offer, which promises to suit the varying likes and preferences of all travellers.

Still wondering about where to travel this Christmas and new year vacations? India has a plethora of options for you then. Anyone who has travelled even across a few states in India will know how beautiful the country is. With the snowcapped Himalaya stretching across the north and east forming the international border with neighboring countries, to the desert and salt plains in western India, and the foaming blue waves of the seas and ocean that surround the southern part of India, this land holds almost all the physical features that characterize the Earth. Dotting this picturesque natural landscape are innumerable man-made heritage structures that range from ancient to the modern times, and the beauty and intricacies of these monuments are bound to leave the travellers mesmerized. India’s cultural heritage, which would include its cuisine, is also pretty diverse and colourful, and definitely worth exploring. Thus, India has something or the other to offer, which promises to suit the varying likes and preferences of all travellers. In this context, looking beyond the popular tourist destinations, there are some places that are beautiful, yet can be counted among the ones that see lesser footfalls.

Also Read | Business and company offsite on a cruise? How cruiseliners are becoming favourite MICE destinations

Also Read
Amrit Udyan in Rashtrapati Bhavan to open for public from January 31: Check booking details
Mahabalipuram’s Shore temple: History carved in stones
PM Modi inaugurates one of the biggest mega-kitchens in India: Here’s everything about Kashi’s Anna Kshetra
From Mughal Gardens to Amrit Udyan: A look back at the soul of Rashtrapati Bhavan, a horticultural paradise

1. Yumthang Valley or Sikkim’s Valley of Flowers: situated in north Sikkim at 11,693 ft, this easily can be counted as among the most beautiful locales in the Himalayan parts of India. Considered as a sanctuary, the place abounds in mountain streams, hot springs, and rolling meadows where yaks graze. This area is also known as the valley of flowers owing to the 24 varieties of Rhododendrons that are found in the Shingba Rhododendron Sanctuary. During their flowering season, which starts from early March to mid-June, the valley lights up like a rainbow. The nearest town to this valley is Lachung, where the travellers can stay. Yumthang remains closed from December and March owing to heavy snowfall.

2. Andaman and Nicobar Islands: this pristine Union Territory of India comprises of 572 islands (of which only 37 are inhabited), and holds many virgin beaches, and their beauty coupled with the sparkling blue, green waters of the Bay of Bengal in the background makes it quite an unforgettable experience. The extensive rainforest canopy that exists here holds a large variety of flora and fauna, thus making it a plant and animal lovers’ paradise too. A little information on the tribes that inhabit the islands, as the government website on Andaman and Nicobar Islands tell us, “They were once the largest in population amongst the various tribes inhabiting the Andaman Islands. Their estimated population in 1789 was 10,000. By 1901, their number had decreased to 625 and by 1969 their number had reduced to 19 only. According to the Census of 1971, only 24 of them were around, but by 1999, their number had increased to 41…They are vulnerable to communicable diseases, besides unhealthy drinking habits, acquired after contact with the non-tribal, urban, dominant and advanced communities.” Among these are the Sentinelese tribe, an uncontacted group, who are believed to be the only people in the world still following the Paleolithic level of technology.

3. Mahabalipuram and Kanchipuram, Tamil Nadu: the two cities that hold innumerable heritage structures. Once the hub of commercial and political activities in ancient India, Mahabalipuram is now a buzzing tourist hub, owing to the UNESCO Group of Monuments. Beyond these monuments, the town, which is more a village, retains its sleepy and laid-back attitude, with pretty green paddy fields stretching far and wide. The monuments in Mahabalipuram, which include cave temples and structural temples (6th-8th c. CE), show a beautiful amalgamation of religion and culture, through depictions of various stories from our epics. These are expressed as reliefs and sculptures on rock, often on a gargantuan scale that effortlessly integrates the sculptural works with nature.

Kanchipuram is also known as ‘the city of temples,’ and a walk through the roads show innumerable colourful temples, at all possible nooks and corners, giving a very unique look to the city. Among the more famous temples are the Kailashnathar temple, Vardaraja Perumal Temple, Vaikuntha Perumal temple, Ulagalantha Perumal temple, and the Kamakshi Amman temple.

4. The Rann of Kutch, Gujarat: a salty marsh in the Kutch district of Gujarat, it is among the largest salt deserts of the world, and gives quite an out of the world experience. The Rann comprises of three distinct areas: The Great Rann of Kutch, the Little Rann of Kutch, and the Banni grasslands, and they totally cover an area of 30,000 square km that lies between the Gulf of Kutch and the mouth of the Sindhu/Indus river. The area was once a part of the vast shallow of the Arabian Sea, until a geological movement lifted the area and shut down the connection with the sea. That resulted in the formation of a vast lake which remained navigable during the time of Alexander the Great. The Ghaggar river, which has now shifted its course, would earlier empty itself into the Rann of Kutch. Currently the Luni River, the Rupen river, West Banas River, and Puran river empty themselves in the Great Rann of Kutch. The entire area is covered with sandy islets of thorny scrubs, which forms many wildlife sanctuaries that are teeming with wildlife, including the flamingos and Indian wild ass.

5. Kashi or Varanasi, Uttar Pradesh: Kashi, Varanasi, or Banaras, is considered as one of the oldest living cities in the world. As Mark Twain, once said, “Benaras is older than history, older than tradition, older even than legend and looks twice as old as all of them put together.” The sacred space of Varanasi (Kashi) has been the ultimate teerth for the Hindus from times immemorial. It is believed that if one is fortunate enough to die in the sacred teerth of Varanasi he or she would attain moksha, which means freedom from the cycle of birth, death, and re-birth. The city has also been the center of religious learning and education for more than 3000 years. It is near Varanasi, just 10 km away, in a place called Sarnath where Buddha preached his first sermon after gaining enlightenment. Besides being the religious, philosophical, and knowledge centre, for thousands of years, the city has also been a node of arts and crafts, textiles, and weaving. Kashi is also a pilgrimage place for the Jains who believe that Parsvanath, their twenty-third tirthankara, was born here. The city is full of ancient to medieval era temples, the most famous among them being the Kashi Viswanath temple. While the innumerable city lanes allure one to walk around them and explore the culture and cuisine of the city; the Ganga ghats are mesmerising places too, to sit and watch, where one sees almost the whole of India buzzing around them. Varanasi is a religious and cultural melting pot of India, in the truest terms.

India is majorly a hot tropical country, except for the Himalayan regions, so travelling in India is best done during the winters. Since its December and winter is at its peak, so now is the right time to pack that bag, take a train or a plane or a taxi, and start exploring the beautiful country.