The early medieval site of the Neelkanth temple comprises of one surviving temple (dedicated to Shiva and partly reconstructed by the ASI), and an extensive area that is filled with scattered ruins of some 200 odd temples. 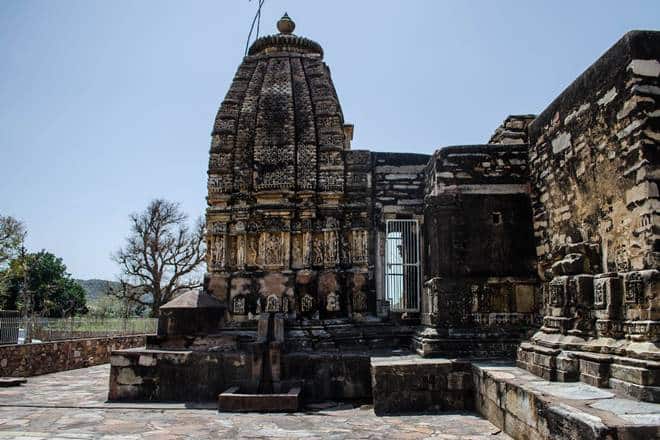 The temple is of a trikuta style (three garbagrihas/sanctums), of which the central or main sanctum faces west and holds the linga.

Around 25-30 km away from the Sariska National Park, in the Tehla village of Alwar, which falls in the buffer zone of the Sariska tiger reserve, stands a Shiva temple complex that dates back to the 7th-10th century CE. The temple was built by Maharajadhiraja Mathanadeva Bargujar, a Pratihara feudatory ruler, as evident from an inscription dated 961 CE and a rock edict inside the Sariska Tiger Reserve, which is mentioned by Col. James Tod in his 1829 monumental work “Annals and Antiquities of Rajasthan.” Known as the Neelkanth Mahadev Temple, the site sits on an isolated plateau top, which is surrounded by ruined walls of the Rajorgarh Fort. A steep rough hilly track and a strenuous drive that accords some dramatic views of the surrounding landscape takes one to this temple complex.

The early medieval site of the Neelkanth temple comprises of one surviving temple (dedicated to Shiva and partly reconstructed by the ASI), and an extensive area that is filled with scattered ruins of some 200 odd temples. The single standing temple amidst the surrounding ruins is the only one that survived the onslaught of Aurangzeb and his army; and it is locally believed that the Mughal army was forced to flee after being attacked by hordes of angry bees. Now named after Shiva or Neelkantha, this place was known as Rajyapura and Paranagar in the ancient and medieval times.

A closer look at the scattered ruins and the partly reconstructed temple exemplify the high standards seen in ancient and early medieval Indian temple art and architecture. The mandapa ceiling of this temple in intricate concentric patterns show lotus flowers in full bloom, along with other floral and geometric patterns. The pillars and capitals have beautiful carvings that depict kirtimukhas, apsaras, gandharvas, yalis, mithuna, saptmatrikas, and various other figures.The main deity here is that of Neelkanth or Shiva, with a lingam enshrined in the garbhagriha. The lalatabimba of the main shrine has Natesa, while the subsidiary sanctum lalatabimbas hold deities that are now too damaged to be identified.  Inside the temple there is a common mandapa for the three sanctums, with four beautifully carved central pillars. There is a mukhmandapa in front, which also has two exquisitely carved pillars at the entrance.

The temple is of a trikuta style (three garbagrihas/sanctums), of which the central or main sanctum faces west and holds the linga. The main shikhara remains undamaged, and is of the nagara style; the side sanctums, however, stand bereft of their shikharas. The outer temple walls show pancharatha plan, has a pitha and a vedibandha that holds small niches with sculptures in them. The outer temple walls of the main sanctum hold beautiful sculptures in their bhadra niches that show HariharaArka (a syncretic image of Shiva, Vishnu, and Surya), Narasimha, and Tripurantaka. The other external projections are filled with beautiful images of surasundaris, mithuna, yalis, and dikpalas. Among these, there is a beautiful standing image of a bejeweled Shiva and Gauri with nandi sitting at the back. Besides the main Neelkantha temple, the other ruined shrines seen in the site, as
per the ASI, include Hanuman-ki-Deori, Bataka-ki-Deori, Bagh-ki-Deori, Kotan-ki-Deori, Lachholava-ki-Deori, and Dabar-ki-Deori.

A little distance away from the Neelkanth temple are the remains of the Naugaja temple, where on a high platform (jagati) stands a tall statue of the Jain tirthankara Shantinatha, carved in a light orangish-red sandstone. An inscription now kept in the National Museum (Delhi) says that a Jain temple was “dedicated to Shantinatha and built on the 13th day of the dark half of Baisakha in the year VS 979 (AD 922-23) during the reign of Gurjara-Pratihara ruler Mahipala I Deva of Kannauj, by the architect Sarvadeva of Simhapadra.”The Neelkanth Mahadev temple ruins remained neglected for many years, and it is only recently that the ASI has started conserving it. Besides the two standing temples, the entire area is scattered with broken parts of temple and sculptures that can be explored by those interested in temple art and sculptures. There is also an old stepwell, along with some white-coloured typical Rajasthani styled folk temples built as memorials to the martyred ancestors.

Travel tips: Alwar is well connected with Delhi and Gurgaon via road and is just around 4-5 hours by car. Train Passengers can easily reach Alwar by rail from Jaipur or Delhi. If looking to reach by air, the closest airport is Sanganer airport in Jaipur, which is 150 km from Alwar. Best time to visit Alwar is between November to February/March, when it is cooler. The place is also beautiful during the monsoons.