The virtual party: Fairs and concerts from around the world that were held successfully virtually amid COVID-19

Here are some fairs and concerts from around the world that were held successfully virtually, keeping in mind social distancing. 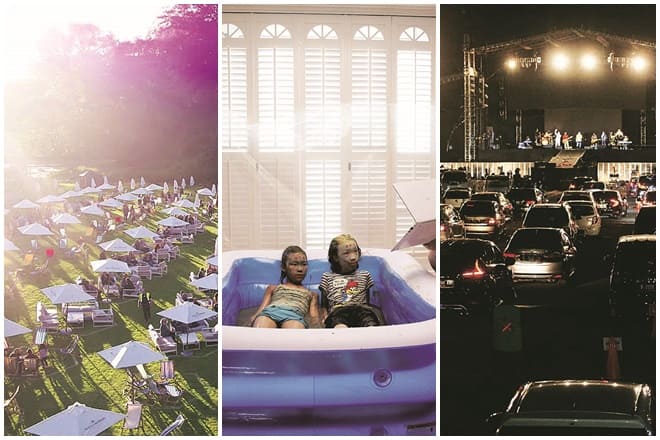 But some concerts and festivals went on as per schedule—some online, others in the drive-through mode.

The year of the pandemic saw a sleepy summer with nowhere to go. But some concerts and festivals went on as per schedule—some online, others in the drive-through mode. Here are some fairs and concerts from around the world that were held successfully virtually, keeping in mind social distancing.

Kahitna drive-in concert
A drive-in concert was held in Jakarta on August 29 by local pop band Kahitna. With eight artistes performing sentimental and nostalgic tunes for a virtual audience, the concert was staged in the parking area of the Jakarta Inernational Expo complex. About 900 people in 300 cars attended the concert wearing masks and honking and flashing their car lights to cheer the group. Each car played the concert on its FM radio. Each car was sprayed with a disinfectant on arrival.

Boryeong Mud Festival
The Boryeong Mud Festival takes place in Boryeong, South Korea, in summer. It was first staged in 1998 and gained huge popularity. Mud pool, mud slide, mud prison, mud skiing competitions and coloured mud body painting are some of the attractions. The mud comes from Boryeong mud flats and is considered rich in minerals. Health and beauty clinics, in fact, offer massages and acupuncture using the medicinal qualities of the mud. Large fireworks take place at the closing ceremony of the festival. This year, the festival went online with children inflating mud pools at home and connecting with others virtually.

Gisburne Park Pop Up
Gisburne Park Pop Up was the UK’s first outdoor festival that was held with social distancing in July. DJ Craig Harris, DJ Patrick Nazemi, among others, played music for the attendees. The seating arrangement was made in hexagonal pitches with space enough for six people, each spaced 2.6 m apart. To avoid people queuing up for food and drinks, eateries delivered food to each pitch. The eight-week festival had opera, film screenings, DJs and family sing-alongs. The festival was held in Gisburne Park Estate in Gisburn village in north England.

Naadam sporting festival
The traditional festival of Mongolia—which loosely translates to ‘three games of men’ (namely horse racing, archery and wrestling)—is held during summer. Both men and women participate in the games. It is the biggest Mongolian festival and the most watched one that is held in July every year. Due to the pandemic this year, the festival was held without a live audience in Ulaanbaatar for the first time in its 800-year-old history. The two-day festival that usually attracts tens of thousands of crowds only saw VIPs watching the game at the venue, while others watched it through live broadcast.

Metallica concert
Metallica recorded a concert in mid-August in a vineyard and it was played out for thousands of virtual audience members in drive-in theatres in north California. The area, where the audience members parked their cars to watch it, was spaced out, so that there was a space of one car between two vehicles to ensure
social distancing. One could also listen to the show through FM radio. Some people even brought fold-up chairs to sit on beside their vehicles in the parking during the concert. Though the majority did not wear masks, social distance was maintained.

Boi-Bumba folklore festival
The Brazilian Boi-Bumba festival is a presentation of myths, legends and tales narrated by characters, giant puppets and parade carts followed by a master narrator. It is a culmination of musical, theatrical, religious and tribal processions. The festival is celebrated with food, party and drinks. The play tells the story of farm worker Pai Francisco and his pregnant wife who longed to eat beef tongue. The three-day celebration of the indigenous cultures of the Amazon forest was livestreamed this year to prevent the spread of infection. The performers performed with their masks on. The festival was held in Parintins in Brazil in June.
World Theatre

Festival Shizuoka
The festival was due between April 25 and May 6 this year, but was cancelled due to the pandemic, leaving a huge void for artists and fans. In a respite for them, though, it was organised on cloud, with online distribution of its programmes. Discussions with artists and dramatists were livestreamed and held on Zoom. Past works and plays were also posted online. The online version of the festival attracted more than 55,000 viewers. Artists from other countries, too, were livestreamed, making it an international success. The 2017 Buddhist-style production of the Greek play Antigone was also streamed for the virtual audience.