The power of protests

The repeal of the farm laws has brought into focus the perseverance of protesters and how a mass movement can change policy. 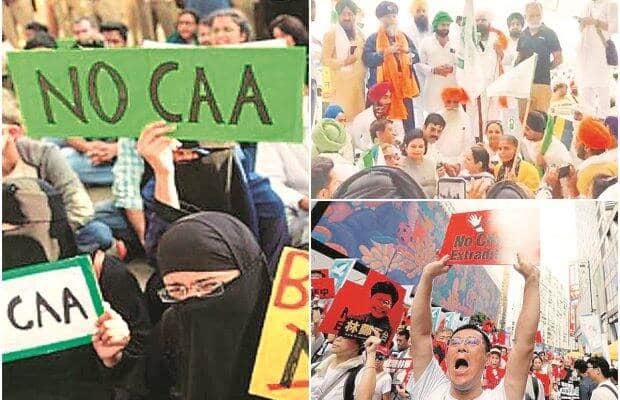 We look at other such significant protests around the world.

The repeal of the farm laws has brought into focus the perseverance of protesters and how a mass movement can change policy. We look at other such significant protests around the world.

CAA protests
Widespread protests took place after the Citizenship Amendment Act (CAA) was passed by the government in December 2019. This and the associated proposals of the National Register of Citizens (NRC) sparked national protests which first began in Assam and then spread to Meghalaya, Delhi, Tripura, Arunachal Pradesh and other states. The Act aimed to accept the illegal migrants who were Sikh, Jain, Hindu, Buddhist, Parsi and Christian from Pakistan, Bangladesh and Afghanistan and had come to India before 2014. However, conflict arose as it did not mention Muslims and other communities who had fled from the neighbouring countries. NRC was put on hold after states declined to accept the Bills and the CAA rules are waiting to be framed by the government.

Farmers’ protests
The protests that caught the attention of the global media and which went on for more than a year were against the three farm laws—The Farmers’ Produce Trade and Commerce (Promotion and Facilitation) Act, The Farmers (Empowerment and Protection) Agreement of Price Assurance and Farm Services Act, and The Essential Commodities (Amendment) Act. It was in July 2020 when the farmer agitation began and farmers sat in protest along Delhi’s borders in harsh weather conditions for more than a year. Finally, the government relented and PM Narendra Modi announced repealing of the laws on November 19. The move was termed by some a political decision and by others a win for the farmers.

Hong Kong protests
Hong Kong’s protests had started in March 2019. They were against a Bill to allow extradition to China. Hong Kong was ruled by Britain till 1997 as a colony and then returned to China. The “one country, two systems” arrangement allowed some autonomy to the country and rights to people. The Bill was withdrawn in September 2019 but demonstrations for full democracy continued, with clashes between police and activists becoming increasingly violent. The police fired with live bullets while the protesters attacked them and threw petrol bombs. The protests came to be known as the 2019-2020 Hong Kong protests or the Anti-Extradition Law Amendment Bill Movement as they went on for a few months.

Algeria protests
The Algerian protests, also known as Revolution of Smiles or Hirak Movement, are ongoing and began in 2019. They began after Abdelaziz Bouteflika announced running for the presidential term. The protests were initially peaceful but later tensions began rising and since then major demonstrations have taken place. In February this year, 5,000 people gathered in Kherrata to mark the two-year anniversary of the Hirak protest movement and shortly after this, President Abdelmadjid Tebboune ordered the release of the people who had been imprisoned for their participation in demonstrations.

Climate protests
School Strike for Climate or Fridays for Future (FFF), Youth for Climate, Climate Strike or Youth Strike for Climate is a large-scale movement of school students who skip Friday classes to participate in climate change demonstrations demanding action from political leaders and fossil fuel industry to transition to renewable energy. These strikes began in 2018 after Swedish teen Greta Thunberg staged a protest outside the Swedish parliament. The global strike in 2019 had more than a million strikers in about 125 countries. The second round of strikes in 2019 took place in 150 countries. In September 2019, the Global Week for Future was organised across 150 nations with 4,500 strikes. The protests have attracted the attention of world leaders and several measures are being discussed to reach net zero emissions.