The Future is Asian: Can Asia rise to global dominance?

China is unlikely to impose either its traditional hierarchy-based Middle Kingdom or unipolarity in Asia or beyond, as other powers in Asia are also rising and can checkmate China. The author discounts the discord between a rising China and Asian order. 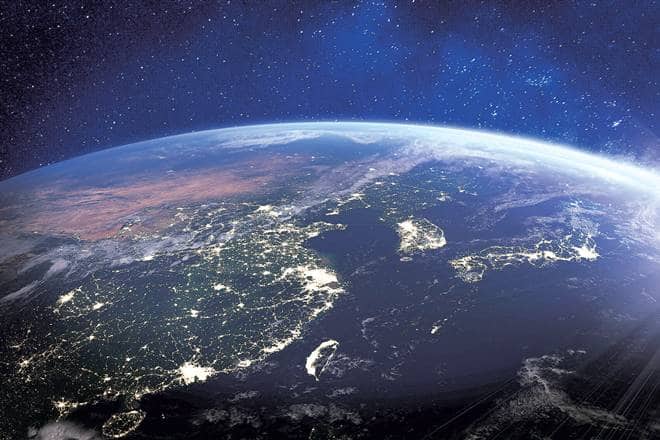 Asia at night from space with city lights showing human activity in China, Japan, South Korea, Taiwan and other countries

Space mapping the earth during the night shows how the trans-Atlantic world — dubbed as the Golden Billion — is illuminated quite starkly compared to the rest of the world. Of course, other places like Tokyo-Osaka belt, Seoul, Beijing-Tianjin and Shanghai, Guangzhou, Singapore, Mumbai and others are also visible but appear as small, isolated specks. This signifies the economic activity and material production reaching the highest in the world in North America and Europe.

However, Parag Khanna, in a thought-provoking tome, argues that Asia is next in line to fill the shoes of the Anglo-Saxon might and emerge as an ‘Asian system’ in a “truly multipolar and multicivilizational order”. A re-rise of Asia recently given its rich historical heritage and, as the famous economic historian Angus Maddison argued, being well-grounded in creating wealth in nearly 2,000 years of history as well till European colonialism shattered the Asian juggernaut, make this possible.

Rabindranath Tagore’s pan-Asian unity in the 1920s was a clarion call to rediscover the soul of the region in light of the onslaught of colonialism. There were the interventions of Edward Said’s Orientalism. Yoichi Funabashi’s ‘Asianisation of Asia’, Singapore’s ‘Asian values’ debate or Mahathir Mohammed’s ‘East Asian economic grouping/caucus’. Recently, Gideon Rachman of Financial Times elaborated on ‘easternisation’, explaining the inexorable rise of Asian economies but also a relative decline of the West. China’s President Xi Jinping in a speech in May 2014 went so far as to suggest “Asian security for Asians”, with implicit demand for the withdrawal of US-led alliances in the region.

This brings us to the age-old issue of defining Asia. Indeed, the definition of Asia eludes historians and geographers, with the formulation of United States Defence Education Act of 1954 becoming a dominant theme and in circulation for the past seven decades. It included four regions — east Asia, southeast Asia, south Asia and central Asia — with west Asia subsumed under its Middle-East region. Khanna includes as many as 53 countries in the Asian region!

Asian parameters in global indexes are rising in GDP, services sector, per capita income, informal grey economy, inter-and intra-regional trade, investments, infrastructure projects, military expenditures, expanding urbanisation and smart cities, relatively younger population profile (except for east and southeast Asian societies), with nine of the 10 busiest airline routes, food and energy consumption and production, effectiveness and inclusiveness of governance and the like, as Khanna elaborates. The cumulative effect is the ‘Asian system’ is not only rising, but shaping the regional and global orders for years and decades to come.

Khanna hopes to see an Asia for Asians — a system that is integrated through diplomacy, connectivity, trade and other arrangements. One or another Asian country outsmarting others in the region is not possible. On the other hand, Khanna is confident that the most likely possibility in future could be a “thriving subregional anchor in a multipolar Asia” given the strategic autonomy that many Asian powers were able to achieve.

Central to the work is the argument of the author that China is unlikely to impose either its traditional hierarchy-based Middle Kingdom or unipolarity in Asia or beyond, as other powers in Asia are also rising and can checkmate China. He discounts the discord between a rising China and Asian order. This is due to the emerging extensive interdependencies and to the relative autonomy each Asian country enjoys. However, the acute sovereignty disputes in the region, rise in military spending and security dilemmas and some Asian countries looking for ‘arbiters’ suggest a different outcome.

A second argument is that western societies are declining with severe economic debts, Eurozone crisis, rising Gini Coefficient, political polarisation and costly wars in Iraq, Afghanistan, Syria and the recent renewal of ‘clash of civilisation’. Yet, as Singapore leaders advised China, such decline is only relative and that Beijing would be making a mistake if this assessment has any political project to replace the US. In other words, the ‘structural power’ of the western countries is so deep and entrenched in the global system that it would be only at one’s own peril, as Iraq, Syria, Libya and other countries discovered recently.

A third argument of the author is that for the western scholarship, beginning with the oft-repeated quote of Napoleon on not waking up the dragon, Asia primarily meant China, with the rest of Asia only playing second fiddle. Khanna offers a corrective to this general direction of obsession with China, although Khanna also places China’s recent Belt and Road Initiative at the centre of the Asian dynamics as well from an economic interdependence perspective.

A fourth argument is that rise of Asia is influencing the global and regional orders, although it is still not clear how this posits to the ‘liberal order’ of one nation, one vote, with the United Nations at its core.

All in all, despite the hype, this is a comprehensive coverage of historical events in Asia, interspersed with interesting and popular anecdotes and providing for a fresh assessment of the mega events in and outside Asia.

(Srikanth Kondapalli is professor in Chinese Studies at JNU)