In ancient and medieval era scroll paintings were the popular modes of entertainment for the common man, which combined both visual and audio media. 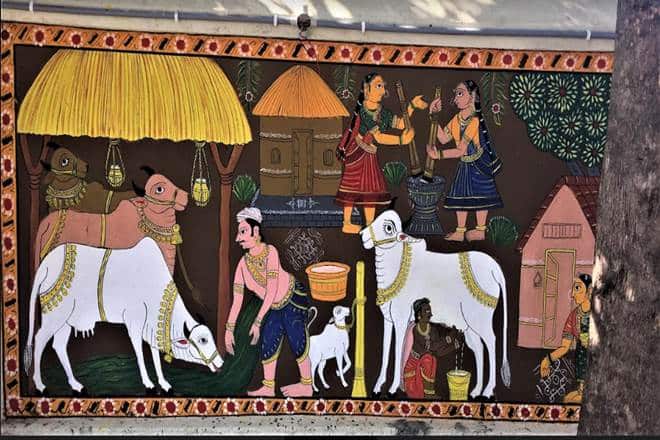 The name Cheriyal painting is derived from the Cheriyal village, which is located about 90 km from Hyderabad, in the Warangal district of Telangana, where a handful of painters have still kept alive this art as a living tradition.

In modern times movies and televisions are popular modes of mass entertainment. In ancient and medieval era scroll paintings were the popular modes of entertainment for the common man, which combined both visual and audio media. Bards or story tellers would carry these painted scrolls as they moved from village to village, and used them as colourful visual props as they wove stories and sang age-old folklore songs for their village audiences. Today this ancient art of storytelling using scrolls is almost lost, and is seen only in remote villages or in government sponsored cultural events. Scroll painting was once popular across India of which the more famous ones include patachitras of West Bengal and Odisha, phad paintings of Rajasthan, and Warli paintings of Maharashtra. Among the lesser known scroll paintings is the Cheriyal painting of Telangana, which will be the subject of discussion in this article.

The name Cheriyal painting is derived from the Cheriyal village, which is located about 90 km from Hyderabad, in the Warangal district of Telangana, where a handful of painters have still kept alive this art as a living tradition. Cheriyal paintings essentially consists of scrolls that depict stories from the epics, puranas, and folktales, and was once an integral part of the religious, social, and cultural lives of the villages in Telangana. The stories painted on scrolls were mainly from the Mahabharata, Ramayana, Markandeya purana, Garuda purana, and various stories from the Krishna leela series, with local heroes also being depicted.

The Cheriyal artists are a part of the Chitrakara community, and in this ancient art of storytelling, the artists, the bards, and the audiences all belonged to different communities, each bound to their hereditary professions. The cloth used for making scrolls, which were generally provided by the bards, varied from 3 feet to 60 feet based on the story that would form the narrative, and were prepared to form a base for the painting by using natural materials such as rice starch, chalk powder, tamarind seed paste, and natural gum from the tirumani tree. These elements were boiled together, filtered using a cotton cloth, and then applied on the cloth in 3 layers, thus creating a thick canvas on which the painting would be done. The three-layered paste helped in preserving the cloth and the painting on it for at least a hundred years. The colours used in painting were also natural; the white colour being derived from powdered seashell or zinc oxide; black from lamp soot; yellow and red from powdered local stones (Gaddalu ranga), the blue colour would come from indigo, while the skin colour came from turmeric paste. This tradition of creating the base canvas and colours from natural elements is still followed by the modern Cheriyal artists. Coconut shells are used as the containers for mixing colours, while squirrel’s or goat’s hair is used for making painting brushes following the traditional processes.

A Cheriyal painter, as per the traditional norms, starts his art work with the painting of Ganesh, followed by the paintings of Shiva, Vishnu, and Brahma. Once these are done, he embarks on the scroll narrative, where the unique Cheriyal figures that are flat in dimension and always facing one another come into appearance. These figures are mostly drawn in their side profiles, thus giving a feeling of an ongoing conversation or a battle. Colours play an important role in Cheriyal painting, and it is seen that in most cases a bright red is used as the background colour. The characters portrayed are also are easily discernible owing to the colours used, as for example, Hanuman is always painted in green, Krishna in blue, Rama in black, and the female characters mostly in red. The Cheriyal artists also made dolls/puppets, which formed various characters, and were used in puppet shows, as for example, in the Katamaraju Katha (a Telugu epic describing a war between the king of Nellore and a local chief) there would be 53 separate characters, all in the form of puppets.

A scroll, if well prepared, can last for more than 100 years. Since the art of storytelling is now rare, the modern Cheriyal artists have started making colourful Cheriyal masks, small decorative scrolls, toys based on Cheriyal themes, and Garuda vahanas. Recent efforts by the Telangana government have seen in gradual revival of this old traditional craft, and it is now imperative that we buy more of such handicrafts to save the Cheriyal painting, and other Indic traditional artworks from dying out.