Sounding the gong: Madeleine Albright gives a reality check of how countries across the globe are living in ‘flawed democracy’

Madeline Albright is worried about the return of fascism in US and rest of the world. 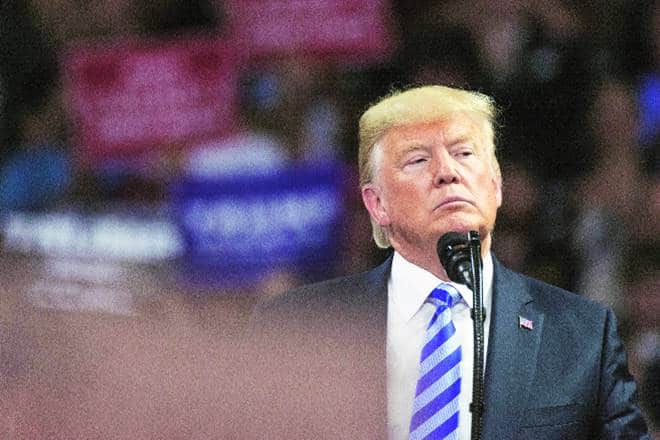 The author calls US President Donald Trump the first anti-democratic president in modern US history with no respect for democratic institutions. (Bloomberg)

It must be an odd thing to worry about America’s future when its economy is going through one of its strongest phases. At age 80, Madeline Albright—professor of international relations, Georgetown University, former ambassador to the UN, and secretary of state in former president Bill Clinton’s government—is worried about the return of fascism in her country and around the world, and offers a remarkably lucid discussion to educate us of its signals. Fascism: A Warning is not a hopeless book, but it’s scary as hell.

Albright should know. Born in Czechoslovakia, she fled fascism twice—as a toddler to England after the Nazi takeover in 1938 and then, permanently, to the US following the Communist takeover in 1948. As Clinton’s chief diplomat, and the first woman in that role, she has had disturbingly close glimpses of autocrats striving to recreate a world that existed only in their heads.

“Fascism is not an exception to humanity, but part of it,” Albright writes in her sixth book. “Anti-democratic leaders are winning democratic elections, and some of the world’s savviest politicians are moving closer to tyranny with each passing year.” She offers expertly-drawn, relevant sketches of despots such as Mussolini, Hitler, Stalin, Putin, Hungary’s Viktor Orban, Turkey’s Recep Tayyip Erdogan, Serbia’s Slobodan Milosevic, Venezuela’s Hugo Chavez, and the worst of them all, North Korean dynastic ruler Kim Jong-il, to show that even if we are not there yet, the signals are strong and abundant for us to be vigilant.

Also Read
How to navigate your midlife career crisis?
Queen Elizabeth II’s Death: Voices strengthen demanding return of Kohinoor; Here’s how it reached London
Here’s why vegan-based products are good for your lifestyle
Road trip: The other Goa

The elephant in Albright’s room is, of course, US President Donald Trump. But hers is not just a Democrat’s view; indeed, she roundly criticises the Congress for sitting on the 60-word Congressional authorisation in 2001 to use force against those who “planned, authorized, committed, or aided” the September 11 attacks. This phrase has been used to justify anti-terror operations in 16 countries and against groups that did not exist in 2001. Contempt for others has become a defining characteristic in American politics.

Albright is right when she says Trump is the “first anti-democratic president in modern U.S. history” with no respect for democratic institutions—he undermines his own Department for Justice and the media—and “would audition for dictator” in a country with weaker checks and balances. Although Trump lacks the intellect to play with fascism, unlike other Americans such as Fritz Kuhn and senator Joe McCarthy, his unstinted admiration for Kim and Putin certainly indicates the extent of his ambition!

The rule of Mussolini, Italy’s prime minister from 1922 to 1943, was “how twentieth-century fascism began: with a magnetic leader exploiting widespread dissatisfaction by promising all things,” writes Albright. The snapshot bears an uncanny resemblance to many of the world’s current leaders. Mussolini wanted an Italy that would be “prosperous because it was self-sufficient and respected because it was feared.” He also had a talent for theatre, and was a poor listener; he insisted his instincts were always right. Adolf Hitler, founder of Nazism who proved far more dangerous than the native populist Mussolini, “lied incessantly about himself and about his enemies.” He convinced Germans that he “cared for them deeply when, in fact, he would have willingly sacrificed them all.” Sounds familiar?

So what makes a fascist? In 1932, Mussolini described fascism as a closed universe in which “the State is all-embracing” and “outside which no human or spiritual values can exist”. The 21st century is far more complicated, sadly. Albright attempts a definition, using commonalities deduced from these portraits. Fear is definitely a cause for the rise of fascists, who claim to protect their people by intensifying that fear. When people are fearful, angry or confused, they often exchange freedom for order; they “want to be told where to march” and, as Mussolini said, to “submit to being shaped”. The authoritarian resurgence in several countries is usually generated and accompanied by attempts to subdue people through racism/religion, xenophobia, and brainwashing though incessant, clever campaigns based on lies. According to Albright, a fascist leader identifies with a group of a certain ethnicity or class and encourages it against the rights of all others; rises above the law and denigrates democratic institutions such as the courts or the free press; and uses any method, preferably military force, to subdue the citizens.

By that count, only Kim qualifies; the rest, though they show immense potential, don’t even come close to Kim’s ultra-nationalism, efforts to build a superior race of Koreans, repression, and utter disregard for human rights. Indeed, Albright need not have been nervous about Trump making concessions to Kim; as events have proved, Korea is unlikely to listen to Trump and dismantle its nuclear capability. But Albright is right in sounding the gong; democracy, especially civil society and the fourth estate, are under attack everywhere. Nations may still take a long time to descend into tyranny, but the process is on. Most citizens everywhere do not have faith in their governments any more, and from cynicism to fascism is but a short step.

Almost one half (49.3%) of the world’s population lives in a democracy of some sort, but only 4.5% reside in a “full democracy”. Even these numbers are declining steadily, finds the Economist Intelligence Unit’s Democracy Index 2017. One-third of us live under authoritarian rule—blame China! Two of the world’s largest democracies have slid to “flawed democracy”; while Trump brought the US down, India has been slipping since 2014 owing to declining political culture and civil liberties!

Written with Bill Woodward, her long-time collaborator, Fascism is a terrific read, lucid and argued from both sides of the brain, with impressive turns of phrase. Consider this: “Uncontrolled migration produces social friction not because many refugees are criminal and terrorists (they aren’t), but because living side by side with strangers requires two precious commodities: goodwill and time. Both are necessary to build trust; neither is as widely available as we would like.”

For those of us used to living free, freedom can also mean taking democracy for granted. An illiberal democracy respects the will of the majority, the supposed needs of the community, but disregards the concerns of the minorities, and with it, the inalienable rights of the individual. This is precisely why Albright’s book is such a timely warning. She emphasises the need to ask relevant questions and always speak, to quote Quincy Adams, “the language of equal liberty, of equal justice, and of equal rights”. Mussolini said if you pluck the chicken one feather at a time, then people won’t notice. “So we have to speak up when the feathers are flying.”

Albright may not have the last word on how fascism could be mutating in the current century—with omniscient technology leveraged as propaganda machine, who even needs military power? In world affairs today, cyber warfare, as already practised by Russia, is the new power tool in undermining democratic forces. Make no mistake: the feathers are already flying. For the thousands of migrants in the United States right now, fascism is already here. For the hundreds of journalists already killed in India, Afghanistan, the US, and many other countries, fascism is already here.

The author is a freelance writer