They can now experience fast-moving and 8k ultra high definition videos of astronauts living, working and conducting research in the International Space Station. 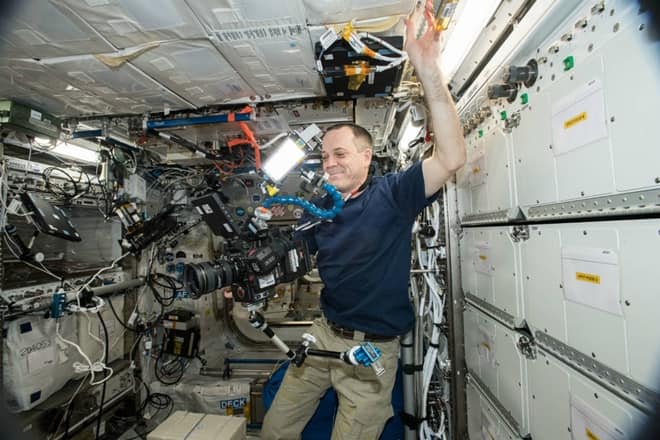 NASA astronaut Ricky Arnold does some filming on the International Space Station Oct. 3, 2018, with a Helium 8K camera, made by the digital cinema company RED. (NASA)

The space fanatics and astronomy lovers out there have received their Christmas gift from NASA and ESA a bit early this year! They can now experience fast-moving and 8k ultra high definition videos (8192 x 4320 pixels) of astronauts living, working and conducting research in the International Space Station.

The new cameras will be able to bring science and every minute experiments from space to our daily lives – be it homes, classrooms or labs.

Engineers who made it possible for the viewers to watch 4k HD videos from the space, have now sent a new camera, which can record images four times the resolution of what it used to be before. The Helium 8K camera by RED can shoot at resolutions ranging from conventional HDTV up to 8K.

Dylan Mathis, communications manager for the ISS Program at NASA’s Johnson Space Center in Houston who is also excited to see the new HD image said that, “The new ultra HD footages showcase the story of human spaceflight in more vivid detail than ever before.”

Now, the viewers can watch the ISS crew members doing advanced DNA sequencing in space or research about genetic differences in space-grown and Earth-grown plants. They can also witness them study dynamic forces between sediment particles and other research, or can just explore the Space Station other facilities.

The RED camera was delivered to the International Space Station in April this year with 14th SpaceX cargo resupply mission.

While everyone in NASA is excited about the new high-quality imagery, David Brady, assistant program scientist for the International Space Station Program Science Office at Johnson said, “The improved imagery will bring the person on Earth closer to the space station experience, and allow them to see what the astronauts are doing in space to improve their lives, as well as facilitating humanity to explore the universe more.”

Incidentally, the RED camera which has been sent to space was also used in recording movies like Guardians of the Galaxy Volume 2, The Hobbit trilogy, andTV series such as, Stranger Things, and Lost in Space.

This November 2 celebrated the 18th year anniversary of human living in space continuously. And the 20th anniversary of the first Space Station launched was on November 20, while the second will be on December 4th.