UN chief asks G20, including India, to invest in green transition as they recover from COVID-19

The cost of renewables has fallen so much that it is already cheaper to build new renewable energy capacity than to continue operating 39 per cent of the world’s existing coal capacity, Guterres said. 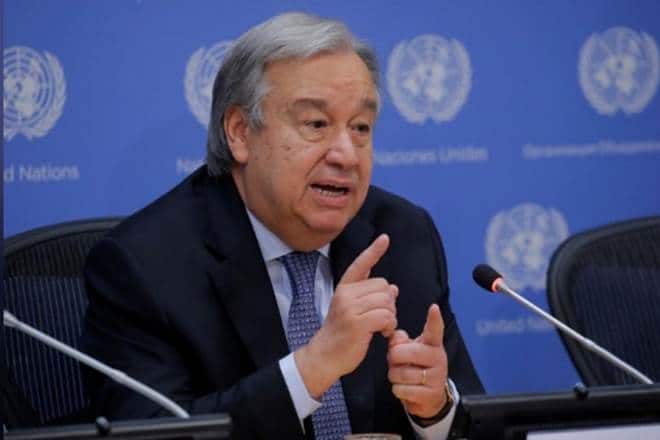 The Secretary-General elaborated that in India, 50 per cent of coal will be uncompetitive in 2022.

UN chief Antonio Guterres on Friday renewed his call on India and other G20 countries to invest in a clean, sustainable transition as they recover from the COVID-19 pandemic, expressing concern over the continued support for fossil fuels by nations around the world.

“They are the ticket to growth and prosperity. Yet, here in India, subsidies for fossil fuels are still some seven times more than subsidies for clean energy,” he said.

The UN chief described as “deeply troubling” the continued support for fossil fuels in so many places around the world.

“I have asked all G20 countries, including India, to invest in a clean, green transition as they recover from the COVID-19 pandemic. This means ending fossil fuel subsidies, placing a price on carbon pollution and committing to no new coal after 2020,” Guterres said.

The Secretary-General elaborated that in India, 50 per cent of coal will be uncompetitive in 2022, reaching 85 per cent by 2025.

“This is why the world’s largest investors are increasingly abandoning coal. They see the writing on the wall. It spells stranded assets and makes no commercial sense. The coal business is going up in smoke,” he said.

Guterres said that he is “increasingly concerned” about the several “negative trends” and pointed out that G20 recovery packages show that twice as much recovery money has been spent on fossil fuels as clean energy.

“In some cases, we are seeing countries doubling down on domestic coal and opening up coal auctions. This strategy will only lead to further economic contraction and damaging health consequences.

“We have never had more evidence that pollution from fossil fuels and coal emissions severely damages human health and leads to much higher healthcare system costs,” Guterres said.

Presently, despite being the world’s fourth largest producer, India is the second largest importer of the dry-fuel, Modi had said.

“Allowing private sector in commercial coal mining is unlocking resources of a nation with the world’s fourth-largest reserves,” he had pointed out.

Modi had said that the launch of the auction process not only marked the beginning of unlocking of the country’s coal sector from the lockdown of decades, but aimed at making India the largest exporter of coal.

Guterres lauded the developed economies and many developing nations for leading by example by shifting to green solutions to meet their energy demands amid the pandemic.

He cited the example of South Korea, the United Kingdom and Germany, as well as the European Union for speeding up decarbonisation of their economies in their domestic stimulus and investment plans in response to COVID-19.

He noted that these countries are shifting from unsustainable fossil fuels to clean and efficient renewables, and investing in energy storage solutions, such as green hydrogen.

With outdoor air pollution, largely driven by high-emitting energy and transport sources, leading to damaging pulmonary diseases — asthma, pneumonia and lung cancer, Guterres said researchers in the United States have concluded that people living in regions with high levels of air pollution are more likely to die from COVID-19.

“If fossil fuel emissions were eliminated, overall life expectancy could rise by more than 20 months, avoiding 5.5 million deaths per year worldwide. Investing in fossil fuels means more deaths and illness and rising healthcare costs. It is, simply put, a human disaster and bad economics,” he said.

The cost of renewables has fallen so much that it is already cheaper to build new renewable energy capacity than to continue operating 39 per cent of the world’s existing coal capacity, Guterres said, adding that this share of uncompetitive coal plants will rapidly increase to 60 per cent in 2022.