At least one of the seven rocky planets orbiting the dwarf star TRAPPIST-1 could be an Earth-like ocean world, say scientists who created updated climate models for the exoplanets. 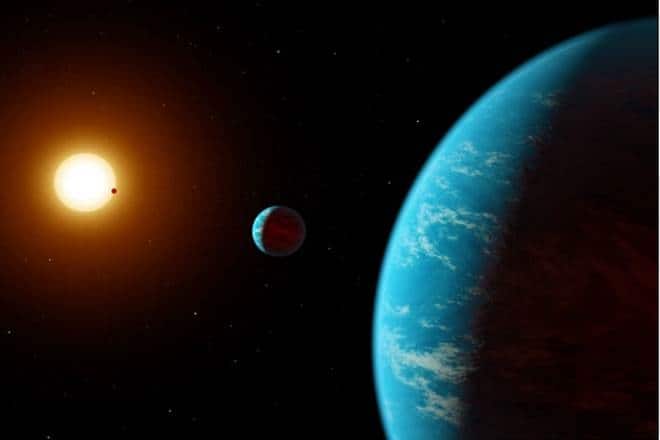 At least one of the seven rocky planets orbiting the dwarf star TRAPPIST-1 could be an Earth-like ocean world, say scientists who created updated climate models for the exoplanets. Researchers from University of Washington in the US said that due to an extremely hot, bright early stellar phase, all seven of the star’s worlds may have evolved like Venus. Any early oceans the planets may have had evaporated, leaving behind dense, uninhabitable atmospheres.

“We are modeling unfamiliar atmospheres, not just assuming that the things we see in the solar system will look the same way around another star,” said Andrew Lincowski, a doctoral student at University of Washington. “We conducted this research to show what these different types of atmospheres could look like,” said Lincowski, lead author of the study published in Astrophysical Journal.

TRAPPIST-1, located 39 light-years away, has about nine per cent the mass of the Sun and about 12 per cent its radius. The relatively cool “M dwarf” star — the most common type in the universe — has a radius only a little bigger than the planet Jupiter, though it is much greater in mass. All seven of TRAPPIST-1’s planets are about the size of Earth and three of them — planets labeled e, f and g — are believed to be in its habitable zone, that swath of space around a star where a rocky planet could have liquid water on its surface, thus giving life a chance.

TRAPPIST-1 d rides the inner edge of the habitable zone, while farther out, TRAPPIST-1 h, orbits just past that zone’s outer edge. “This is a whole sequence of planets that can give us insight into the evolution of planets, in particular around a star that’s very different from ours, with different light coming off of it,” said Lincowski.

The team’s radiation and chemistry models create spectral, or wavelength, signatures for each possible atmospheric gas, enabling observers to better predict where to look for such gases in exoplanet atmospheres. Researchers said when traces of gases are actually detected by the Webb telescope, or others, some day, “astronomers will use the observed bumps and wiggles in the spectra to infer which gases are present — and compare that to work like ours to say something about the planet’s composition, environment and perhaps its evolutionary history.” He said people are used to thinking about the habitability of a planet around stars similar to the sun.

“But M dwarf stars are very different, so you really have to think about the chemical effects on the atmospheres and how that chemistry affects the climate,” said Lincowski. TRAPPIST-1 b, the closest to the star, is a blazing world too hot even for clouds of sulfuric acid, as on Venus, to form.

Planets c and d receive slightly more energy from their star than Venus and Earth do from the sun and could be Venus-like, with a dense, uninhabitable atmosphere. TRAPPIST-1 e is the most likely of the seven to host liquid water on a temperate surface, and would be an excellent choice for further study with habitability in mind.
The outer planets f, g and h could be Venus-like or could be frozen, depending on how much water formed on the planet during its evolution. Lincowski said that in actuality, any or all of TRAPPIST-1’s planets could be Venus-like, with any water or oceans long burned away. He explained that when water evaporates from a planet’s surface, ultraviolet light from the star breaks apart the water molecules, releasing hydrogen, which is the lightest element and can escape a planet’s gravity.

This could leave behind a lot of oxygen, which could remain in the atmosphere and irreversibly remove water from the planet. Such a planet may have a thick oxygen atmosphere — but not one generated by life, and different from anything yet observed.