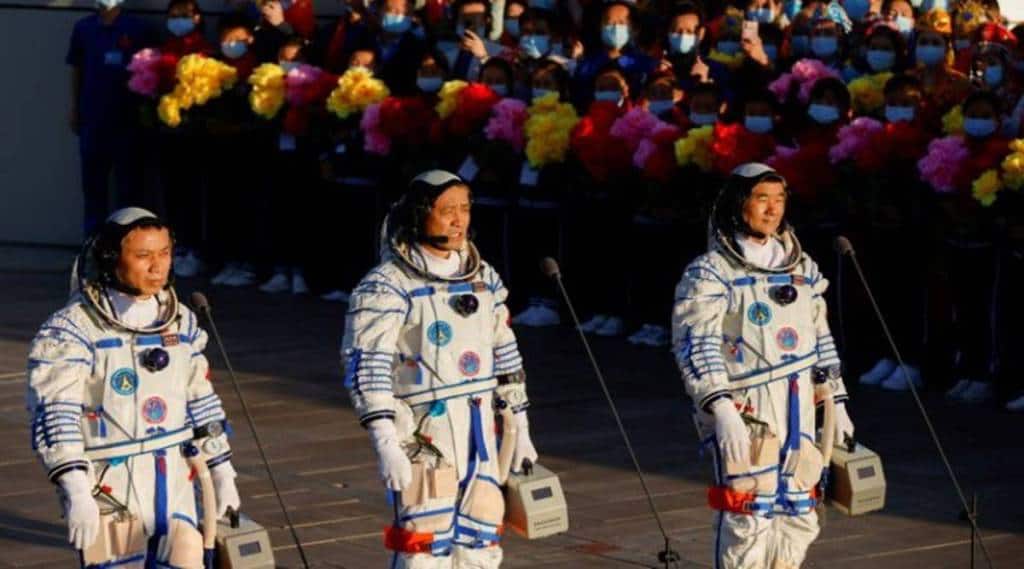 Three Chinese astronauts aboard a spacecraft that docked with China‘s under-construction space station met with their colleagues on Wednesday, making it the country’s first gathering of six astronauts in space. China on Tuesday successfully launched the spacecraft carrying three astronauts, Fei Junlong, Deng Qingming and Zhang Lu, to its space station.

The Shenzhou-15 spaceship, atop the Long March-2F Y15 carrier rocket, blasted off from the Jiuquan Satellite Launch Center in northwest China on Tuesday night, according to the China Manned Space Agency (CMSA).The three space station occupants greeted the new three-member crew with warm hugs and then they took a group picture after the successful docking, the state-run Xinhua news agency reported.

Also Read
Wondering why it never snows in Delhi even when the city is colder than many hill stations? Here’s the answer
NRSC, IIRS to conduct study of Joshimath through satellite images
NASA’s 38-yr-old satellite expected to fall from sky; What are the chances of people getting hurt? Space agency answers
Delhi shivers at 1.9°C, flights and trains delayed; Check minimum temperatures across North India

The space reunion kicked off the first in-orbit crew rotation in China’s space station, according to the China Manned Space Agency (CMSA).The six astronauts are scheduled to live and work together for about five days to complete planned tasks and handover work after which the previous three-member crew who completed a six-month stint in the station will return to earth. Earlier, China’s Shenzhou-15 manned spaceship successfully docked with the space station combination early on Wednesday, the CMSA said.

The spaceship conducted a fast-automated rendezvous and docked with the front port of the space station’s Tianhe module early on Wednesday, it said.The whole process took approximately 6.5 hours. It is the first time that Chinese astronauts aboard the space station have seen the visit of a crewed spaceship, it said.

The spaceship, atop the Long March-2F Y15 carrier rocket, blasted off from China’s Jiuquan Satellite Launch Centre in northwest China on Tuesday night. China plans to complete the space station expected to be ready by the end of this year, amid intensifying competition with the United States. During their six-month mission, the Shenzhou-15 crew will carry out tests related to long-term residence in China’s space station at its three-module configuration, Ji Qiming, assistant to the director of the CMSA said.This will be the last flight mission in the construction phase of China’s space station, official media reported.

The launch was carried out with a Long March-2F carrier rocket. As per the plans announced earlier by China, the space station is expected to be completed by the end of this year. Once ready, China will be the only country to own a space station.

The International Space Station (ISS) of Russia is a collaborative project of several countries. China Space Station (CSS) is also expected to be a competitor to the ISS built by Russia. Observers say the CSS may become the sole space station to remain in orbit once the ISS retires in the coming years.