A trio of researchers has created a computer model that may solve the mystery of why there is so much heat in the Sun’s corona”. 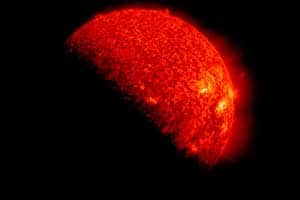 A trio of researchers has created a computer model that may solve the mystery of why there is so much heat in the Sun's corona". (Reuters)

A trio of researchers has created a computer model that may solve the mystery of why there is so much heat in the Sun’s corona.

Scientists have long been perplexed by research results that show the Sun’s corona is millions of degrees hotter than its surface.

In the new effort, the researchers developed a model that describes how that might occur.

Scientists know that on the Sun’s surface, rotating areas of gas create what are known as dynamos – where plasma causes charges to come about.

In the new model, the researchers, two with Ecole Polytechnique and the other with Universite Paris, suggest that when such dynamos “dump” their energy, it causes small eruptions to come about on the surface, allowing energy to dissipate out to the corona.

The team described their model as resembling a mangrove forest. The roots of the trees represent surface magnetic fields – energy makes its way up the trees and dissipates near the top like oxygen from tree leaves into the atmosphere, and that is how the energy reaches the corona.

The team noted that other researchers have found evidence of solar tornadoes, which in a way are similar to the trees described by the model and which can also transport heat up and off the surface, ‘phys.org’ reported.

Other observations have shown that spectral lines of some elements are split into multiple components on the surface, which the team suggests would occur if there happened to be a magnetic field like the one they used in their model.