Lions roar in Gujarat’s Gir! Population of Asiatic Lions up by 29%

Prime Minister Narendra Modi also shared the news on Twitter, hailing the development and attributing the rise in numbers to community participation. 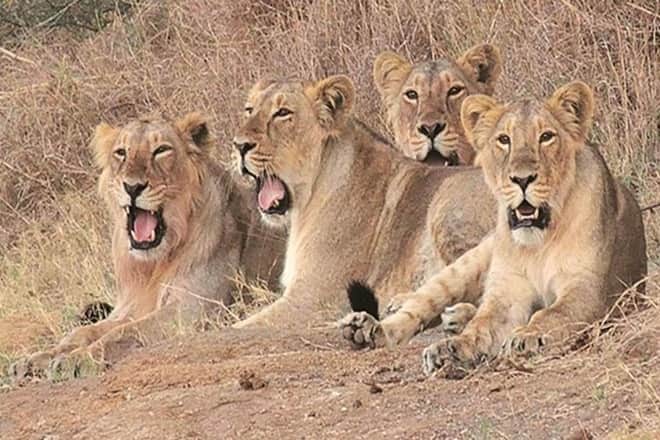 The exercise this time involved around 10 districts where lions have been spotted over the years by 13 forest divisions.

The number of Asiatic lions in the Gir forest region has increased by 29 per cent to 674, the Gujarat forest department said on Wednesday. Prime Minister Narendra Modi also shared the news on Twitter, hailing the development and attributing the rise in numbers to community participation.

The Gujarat forest department carried out a `population estimation exercise’ on the night of June 5 and 6 when there was full moon. The exercise was undertaken as the five yearly census could not be carried out in May due to the coronavirus outbreak and lockdown, it said.

As per the May 2015 census, there were 523 Asiatic lions in Gir, an increase of 27 per cent from 2010. The “Poonam Avlokan (full-moon night estimation exercise)” showed that the lions’ population had reached 674, a 28.87 per cent increase, the official release said. It was the highest growth rate recorded so far, it added.

The teams relied on GPS data, identification marks and radio collar numbers to find out estimation of the population
of the big cat at Gir, known as the last abode of Asiatic lions. As per the officials, about two dozen lions died in
the region in the last three months due to Babesiosis, a tick-borne disease. In October-November 2018, Canine Distemper Virus (CDV) had claimed the lives of 40 lions.

Earlier, Junagadh range Chief Conservator of Forest D T Vasavada had said that the estimation exercise was not a
complete census. “Lion census is carried out every five years in an extensive manner. Large number of central and state government officials, wildlife lovers, NGOs and members of National Board of Wildlife are involved in it. But due to lockdown we cannot call them now and a full-fledged census cannot be carried out,” he had said.

Prime Minister Modi took to Twitter to share the news. “Two very good news: Population of the majestic Asiatic Lion, living in Gujarat’s Gir Forest, is up by almost 29 per cent,” he said. Geographically, the distribution area of the animals was up by 36 per cent, Modi noted. “Kudos to the people of Gujarat and all those whose efforts have led to this excellent feat,” he wrote on the microblogging website.

Over the last several years, the lion population in Gujarat has been steadily rising. This, Modi said, was powered by community participation with an emphasis on technology, wildlife healthcare, proper habitat management and steps to minimise human-lion conflict. “Hope this positive trend continues,” he said. Gujarat is the home state of the prime minister.