One-hundred-thousand laps around Earth, and the International Space Station is still sailing right along. 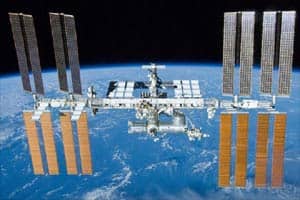 One-hundred-thousand laps around Earth, and the International Space Station is still sailing right along.

The space station reached the orbital milestone u00e2u20acu201d 17u00c2u00bd years in the making today morning. NASA says these 100,000 orbits are akin to traveling more than 2.6 billion miles. That’s equivalent to 10 round trips to Mars, or almost one way to Neptune.

Astronauts have been living continuously aboard the 250-mile-high complex since 2000. Construction began two years before that. Since then, more than 220 people have lived or visited there.

Two Americans, three Russians and one Englishman currently call the space station home. They recently achieved a photographic milestone, snapping the 3 millionth picture taken over the years from the scientific outpost.