India’s extra-terrestrial ambitions: All you need to know 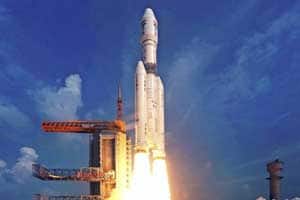 The Indian Space Research Organisation’s most powerful launch vehicle, the GSLV Mk-III, passed a crucial test at Sriharikota on Thursday after the experimental flight of the launcher, intended to put heavy satellites in space, went off without a glitch.

What the success of the LVM3-X/CARE mission and India’s new GSLV Mk-III space launcher mean:

* 1,600 degrees Celsius is the temperature that the crew module withstood at re-entry into atmosphere
* Rs 155 crore was budget of experimental mission; Rs 15 crore was cost of crew module
* Over 3 tonne payload carried by the module, separated at 126 km altitude, plunged into sea

LAUNCH OF A MISSION

India’s extra-terrestrial ambitions have been shackled by the lack of a heavy launcher for deep space missions. The success of ISRO’s LVM3-X/CARE mission demonstrated the ability to put heavy satellites into orbit, and marked the first step towards sending humans into space. The GSLV Mk-III, India’s heaviest launch vehicle yet, lifted off from the Second Launch Pad of Satish Dhawan Space Centre in Sriharikota at 9.30 am Thursday.

The launch marked the successful testing of the atmospheric re-entry of a crew module, which separated from the rocket 325 seconds after lift-off at an altitude of 126 km, and descended in ballistic mode, re-entering the Earth’s atmosphere (about 80 km above sea level) and splashing down into the Bay of Bengal 180 km from Indira Point, the southern tip of the Andaman and Nicobar Islands. The main parachute used by the module was 31 m in diameter, the largest ever made in India, and allowed splashdown at a velocity of around 7 m per second.

Because this is the first time that ISRO has succeeded in returning a space crew module to Earth. All satellites it has launched so far, as well as the Chandrayaan and Mangalyaan spacecraft, are supposed to stay in space, and get destroyed there. Re-entry capability is key to sending a human into space. This is a complicated and dangerous manoeuvre; it is while re-entering the Earth’s atmosphere that the space shuttle Columbia was destroyed in 2003, killing seven astronauts, including Indian American Kalpana Chawla.

Indian Coast Guard ships were expected to retrieve the module and take it to Kamarajar port in Ennore near Chennai, from where it will be shifted to the Vikram Sarabhai Space Centre at Thiruvananthapuram for further study, which is expected to enhance understanding of the re-entry and parachute phases of the flight.

This was an experimental flight. Once ISRO masters the GSLV Mk-III, India can expect to save foreign exchange that it now spends to send heavy communication satellites through space agencies aboard, and also make money by sending up heavy satellites for other countries. The global space industry is worth $ 300 billion, and Antrix Corp Ltd, ISRO’s commercial arm, already earns revenue from its PSLV rockets.

Is probably at least 10 years away. The GSLV Mk-III was launched with active S200 (solid) and L110 (liquid core) propulsive stages and a passive cryogenic stage (C25) with a dummy engine. The cryogenic engine, now under development at the Liquid Propulsion Systems Centre in Mahendragiri in Tamil Nadu’s Tirunelveli district, is likely to be ready in about two years. The launcher’s performance with a heavy third (cryogenic) engine on board will be key to attempting a manned mission or heavier satellite launches.

ISRO’s next launch is of the fourth satellite in the Indian Regional Navigational Satellites System (IRNSS) series in the first week of March 2015. Three of the seven satellites in the series have already been launched. IRNSS will put India in a select group of countries with their own navigation systems. US and Russia have global satnav systems, and China is in the process of upgrading its regional satnav to a global one.