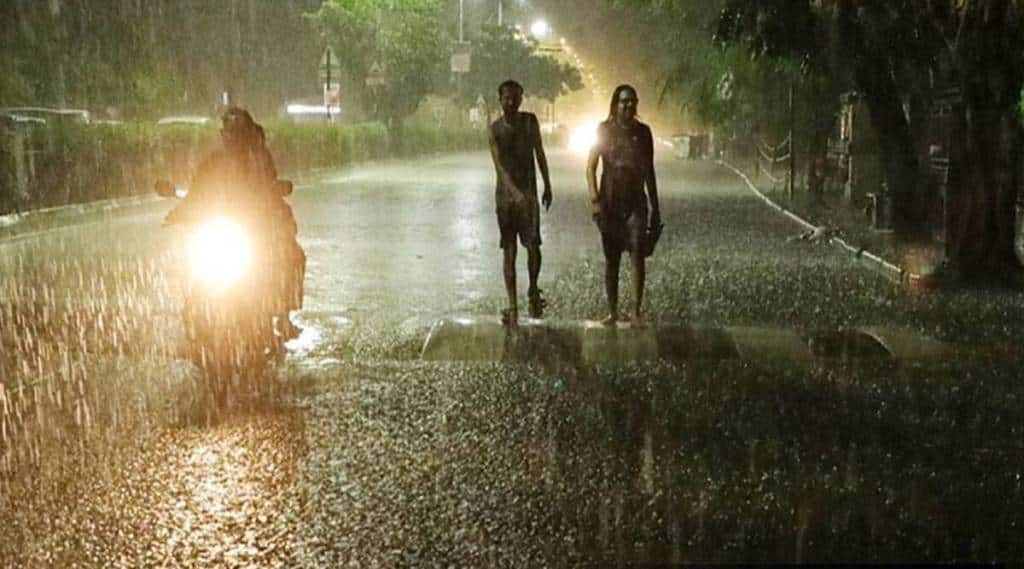 Maharashtra's capital Mumbai witnessed moderate rains along with strong winds since Tuesday and more showers are predicted over the next 24 hours, officials said. (Photo source: IE)

Maharashtra’s capital Mumbai witnessed moderate rains along with strong winds since Tuesday and more showers are predicted over the next 24 hours, officials said. Asked about rains along coastal Maharashtra and the Western Ghat regions, IMD Director General Mrutunjay Mohapatra said the low pressure area attracted strong winds from the Arabian sea which brought heavy rainfall over the region.

The intensity will come down from Wednesday, he said. Due to the heavy rains and subsequent flood situation in Kolhapur, Sangli and Satara districts of western Maharashtra, the examinations of the Kolhapur University scheduled on Wednesday and Thursday have been suspended.The new time table will be announced later, the Kolhapur district administration said in a statement.

The water level of the Panchganga river in Kolhapur has crossed the warning mark. At 10 am on Wednesday, the water level of the Panchganga river at Rajaram weir reached 40.2 feet, as against the warning level of 39 feet and the danger mark of 43 feet, officials from the district disaster management cell said. Some roads in Kolhapur district were closed after water-logging on some stretches, officials from the Public Works Department said.

The Nagpur University cancelled all its examinations scheduled on Wednesday in view of heavy rains in the district and adjoining places in the Vidarbha region. The Rashtrasant Tukadoji Maharajah Nagpur University’s Director, Board of Examination and Evaluation, Dr Prafulla Sabale in a notification said the next date will be announced soon and asked authorities to inform students about the decision. Mumbai and its suburbs witnessed moderate rains in the last one day.

The local trains and bus services of the Brihanmumbai Electric Supply and Transport (BEST) were operating normally on Wednesday. There was no diversion of any bus service, a civic official said.After heavy overnight downpour on Tuesday, the rain intensity reduced in Mumbai, he said.The city recorded 26.87 mm rainfall in the 24-hour period till 8 am on Wednesday, while the eastern and western suburbs recorded 31.38 mm and 33.06 mm downpour respectively in the same period, he said.
The IMD has predicted moderate rain in the city and suburbs with the possibility of heavy showers at isolated places in the next 24 hours.It has also forecast occasional strong winds with a speed of 40-50 kilometre per hour and very likely to reach up to 60 kmph in the metropolis.

In Indore, heavy rains inundated low-lying areas of the city. In western parts of the MP city, some cars were swept away on a flooded road leading to the Sirpur lake due to the strong water current, but there was so far no report of any casualty, Indore Mayor Pushyamitra Bhargava told PTI. Alarmed by the situation arising due to heavy downpour since Tuesday evening, the district administration declared a holiday for schools on Wednesday.

A Meteorological department official said Indore recorded 108.9 mm rainfall in the 24-hour period ending at 8.30 am on Wednesday.Rains are likely to continue in the city for the next two days, he said.“We have sent civic teams to low-lying areas of the city to help the affected people. They have been directed to shift children, women and aged people to safer places first if the need arises,” the mayor said.

The rain waters inundated main roads of the city because of which motorists faced a lot of difficulties, as per eyewitnesses. Indore Collector Manish Shingh said a pond in Nihalpur Mandi area started overflowing after heavy showers and efforts were made to drain out the water from residential areas nearby.