A tree fell near a petrol pump close to the Dockyard railway station of the Harbour Line, due to which traffic movement was affected. The tree was later moved aside and the traffic resumed but it was slow, a police official said. 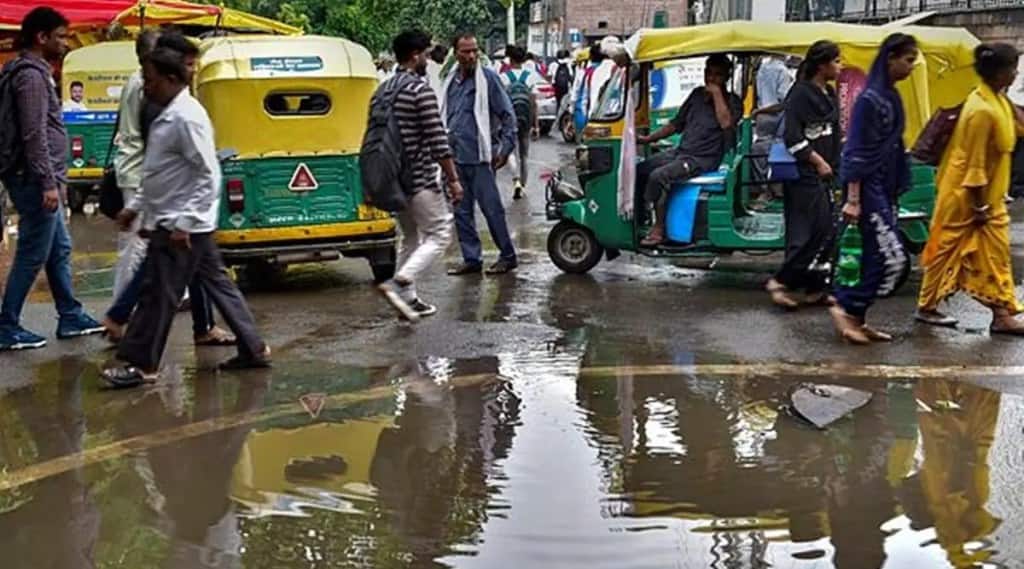 Heavy rains and strong winds lashed Mumbai and suburbs on Tuesday morning and flooded many parts of the city within a couple of hours, throwing road traffic out of gear at some places, officials said. A tree fell near a petrol pump close to the Dockyard railway station of the Harbour Line, due to which traffic movement was affected. The tree was later moved aside and the traffic resumed but it was slow, a police official said.

Some commuters claimed that the local trains, considered as the lifeline of Mumbai, were running late by five to 10 minutes. But, officials of the Western Railway and the Central Railway said the services were running normally.There was water-logging up to two feet at some places and vehicular movement was slow in some of the western suburbs, according to the Mumbai police.

After light showers for a couple of days, heavy rains made a comeback to the metropolis from Monday night. The city and suburbs witnessed incessant showers on Tuesday morning.There was water-logging up to two feet at the Andheri subway, and traffic from there was divert to the S V Road, a police official said. Some areas near the south-bound end of the Bandra-Worli sea link, Mahalaxmi junction, Gamadia junction, Tardeo were also inundated up to 0.5 feet.

A similar water-logging was witnessed at the Hindmata junction due to which the south-bound traffic was moving slow.Traffic movement was also slow in Pratap Nagar, Jogeshwari in the western suburbs, at some spots on the Western Express Highway, Netaji Palkar Chowk, Everard Nagar and near a family court in the Bandra-Kurla Complex, the official said.

The India Meteorological Department (IMD) has predicted moderate to heavy rain in the city and suburbs with a possibility of very heavy downpour at isolated places and occasional gusty winds reaching 40-50 kmph over the next 24 hours.On Monday, the IMD issued an ‘orange’ alert for Mumbai, predicting heavy to very heavy rainfall in the city for next three days.

The island city (south Mumbai) received 42.42 mm rainfall in the 24-hour period till 8 am on Tuesday as against 12.04 mm the day before.The eastern and western suburbs recorded 63.90 mm and 52.43 mm showers, respectively, compared to 22.12 mm and 12.76 mm the previous day, a civic official said.The MeT department issues four colour-coded predictions based on the prevailing weather conditions. The green colour indicates no warning, yellow is to keep a watch, orange is to stay alert, while red means a warning and that action needs to be taken.

Follow us on
Latest News
Let’s talk consent: Know why asking for it is important on dating apps and otherwise
Strong earthquake of magnitude 6.8 strikes China’s southwestern Sichuan province
Gold prices likely to trade sideways to down this week; resistance at Rs 50800, support at 49500 per 10 gram
Petrol, Diesel Price Today, 5 September 2022: Fuel cost unchanged; check rates in Delhi, Noida, other cities
Apple Far Out event: iPhone 14 Pro to get bigger battery, always-on display feature
NFT NYC 2022 on how the NFT sector will develop in the upcoming years
Cause of pneumonia deaths in Argentina found; Legionella bacteria is culprit
Photos
INS Vikrant: These photos of the aircraft carrier will fill your heart with pride
20 hours agoSeptember 4, 2022
Historical Day! Indian Navy gets indigenous aircraft carrier, joins niche group of countries to build its own carrier
3 days agoSeptember 2, 2022
India soaks in Ganesh Chaturthi festivities – Take a look at beautiful pictures
4 days agoSeptember 1, 2022
Read More
×
Want to enhance your personal loan eligibility? Follow these 4 tips
<strong>Publicis Worldwide brings Nitin Sharma on board as senior vice president and head of client services</strong>
Nifty may head to 18300 this month, support at 16800, buy SBI, Kotak Bank; use dips in Bank Nifty to buy
7th Pay Commission News: On Rs 50,000 Basic Pension, Rs 17,000 comes as DR for Pensioners (Check Calculator)
Teacher’s Day 2022: UGC to launch fellowships, research grants for single girl child, retired faculty
From The Disciple to Shabaash Mithu: Here are some shows and movies to watch on Teachers’ Day