Archaeologists have reportedly found evidence of “continued habitation” and a likely temple site, at a place which would have once stood on the banks of the Saraswati river in the ancient and early medieval periods. 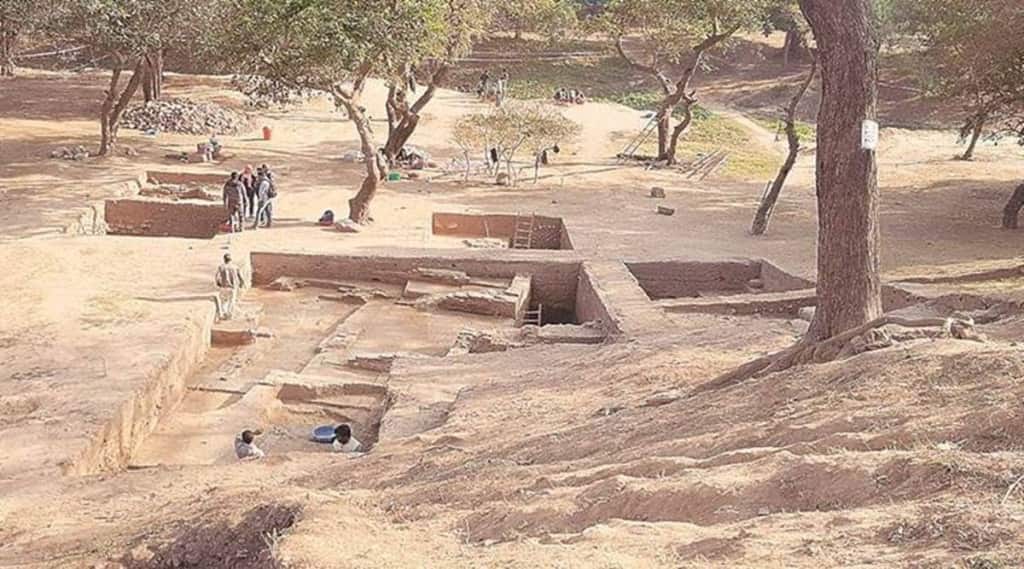 In the context of this recent archeological discovery one other fact comes to mind; that is the importance of Haryana as the starting point in the study of Indian history. (Representational image: IE)

Few days back there were media reports of a 1,600-year-old archaeological site discovered near Haryana’s Sandhai village in Yamunanagar district, which held ties to ancient habitations along the Saraswati river. Archaeologists have reportedly found evidence of “continued habitation” and a likely temple site, at a place which would have once stood on the banks of the Saraswati river in the ancient and early medieval periods.

After there were reports of a villager Balwinder Singh finding six antique coins in an old fort in the area, a team of officials headed by the Haryana Saraswati Heritage Development Board’s deputy chairman, Dhuman Singh Kirmach, and state archaeology department’s deputy director, Banani Bhattacharya, visited the site. As per Ms. Bhattacharya “A complete of 33 cash have been discovered from Sandhai village throughout our go to on November 26, that are primarily Indo-Sassanian cash, which come from seventh century AD. Some bricks of various varieties have been discovered, together with from the interval of Gurjara-Pratihara, some from the Gupta empire interval, and grinding stones have been additionally discovered. There will need to have been an enormous habitation. We have now discovered part of the pillar too that signifies that there was a temple of Gurjara-Pratihara interval.” Mr. Dhuman Singh Kirmach has said that “Many historic websites fall on the Palaeochannel of Saraswati river from Adi Badri in Yamunanagar to Rajasthan border, together with Bhagwanpura, Pehowa, Kapil Muni Mandir at Kaithal, Rakhigarhi, Banawali, and others. The signs of habitation show the people used to settle here because of the availability of drinking water from the river. As of now, previous cash and different artefacts have been discovered at Sandhai village.” Adi Badri, is an important archeological site associated with the Saraswati river and is situated in the wooded foothills of the Shivalik range in Haryana, north of Yamunanagar, and 9 km from the newly discovered archaeological site.

The State of Haryana as the cradle of India’s civilization

In the context of this recent archeological discovery one other fact comes to mind; that is the importance of Haryana as the starting point in the study of Indian history. Post independence, archaeologists have discovered few sites in Haryana that date back to 6000 BCE or earlier, making it evident that this state was among the first places in the history of world civilization where humans shifted from a nomadic hunting-gathering lifestyle to form settled agricultural communities (as expressed by Prof. Vasant Shinde in an interview).

One such site is Bhirrana or Birhana, a small village in Fatehabad District, Haryana, situated along the channels of the seasonal Ghaggar (Saraswati) river. The Bhirrana site is stated to be the oldest Saraswati-Indus Valley Civilization site, dating back to 7570-6200 BCE. The antiquities found from this site include pottery, fabrics, copper chisels, arrow heads, spear heads; beads of steatite, faience, terracotta and shell, bangles of copper and terracotta; semi-precious stones and beads etc. Charred grains of wheat and barley were also recovered from the deposits. The most interesting find from this site is a female dancing girl (replica of the famous “Dancing Girl” from Mohenjodaro) engraved on a potsherd as graffiti. Terracotta wheels with painted spokes are also important findings from this site. Multi-roomed houses were found at this town, which were made of mud bricks (sun-baked bricks), and wide straight roads were found separating the houses. A circular structure of baked earth (like a tandoor) was found, still commonly used in community kitchens across rural India.

In the words of L.S. Rao who had led the excavations at the Bhirrana site: “the importance of the excavation at Bhirrana lies in the fact that we have strong evidence for the first time of an unbroken cultural sequence, starting from the village culture represented by Hakra ware and its evolution gradually into semi-urban and urban cultures till the site was finally abandoned…In the present state of knowledge the Hakra ware culture belongs to the fourth millennium B.C., or 6,000 years before the present…For the first time now, in post-Independence India, stratigraphically positioned Hakra ware culture deposits have been exposed at Bhirrana. They show a typical early village settlement, wherein dwelling pits were cut into the natural soil.”

Samples taken from the earliest levels at Bhirrana site had C14 dates determined in the Birbal Sahni Institute of Paleobotany (Dikshit & Mani 2012), which led to the creation of a new chronology for Bhirrana:

This new chronology turned the chalcolithic site of Bhirrana in Haryana, situated beside the Saraswati River (now known as the Ghaggar river), into a contemporary or an even earlier site than the neolithic Mehrgarh site in Pakistan. When taking the two sites into context, Bhirrana shows a clearer cultural continuity than Mehrgarh, from the earliest to the Mature Harappan phase (Dr B.R. Mani, Indian Civilization evolved in the 8th Millennium BCE in the Plains of ‘Lost’ River Saraswati, Puratattva, No. 42, 2012).Constant discovery of such “continued habitation sites” from pre to proto-historic to the medieval era keep reiterating the fact that Haryana holds the key to the start of Indian civilization, a fact that can no longer be overlooked; thus, making it necessary that the history of the state be given greater focus by the concerned authorities. More excavations and associated researches on the various archeological sites is a necessity, and arrangements should be made for protecting these sites. It is also essential that awareness be spread among the common people of Haryana on the importance of these sites, who should be made to understand as why it is necessary to preserve and protect such historical sites.