The Ministry of Earth Sciences’ air quality forecast agency SAFAR said wind over the next three days is likely to be moderate enhancing mixing and ventilation of pollutants. 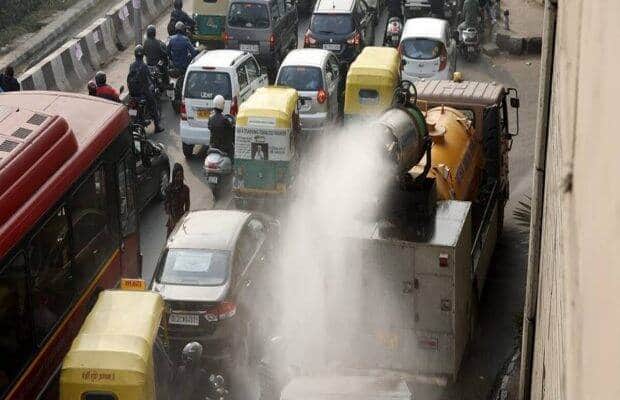 Delhi's minimum temperature was recorded at 8.4 degrees Celsius, one notch below the normal, which is lowest in the month so far, the India Meteorological Department (IMD) said. (Photo source: IE)

The national capital’s air quality continued to remain in the poor category on Thursday due to favourable winds with the 24-hour average air quality index (AQI) reading 289 at 4 pm even as the city witnessed a drop in the maximum temperatures that settled at 23.5 degrees Celsius, the weather office said.

Neighbouring Faridabad (263), Greater Noida (297), Gurgaon (257) and Noida (277) also recorded air quality in poor category. However, the air quality in Ghaziabad entered “very poor” category as AQI there was 303 on Thursday.

The Ministry of Earth Sciences’ air quality forecast agency SAFAR said wind over the next three days is likely to be moderate enhancing mixing and ventilation of pollutants.

“With mostly clear sky conditions during day time, the peak mixing layer height is likely to be around 1.5 km causing moderate vertical mixing of emitted pollutants. Air quality for the next three days likely to improve gradually but within ‘lower end of poor’ or ‘moderate’ category,” it said.

Delhi’s maximum temperature for the day settled at 23.5 degrees Celsius, one notch below the normal.

However, the city witnessed its lowest minimum temperature of the month so far at 8.4 degrees Celsius, one notch below the normal, the India Meteorological Department (IMD) said.

The weather office predicted shallow fog in the coming days and it said that the maximum and minimum temperatures are likely to hover between 23 and 8 degrees Celsius respectively.

The relative humidity at 5.30 pm was 66 per cent, the weather office said.

Next Story
WHO: Omicron could spread faster but it’s still not certain