Ecologists explain why so many trees were uprooted during Delhi thunderstorm

On Ashoka Road, lined with jamun trees, branches impaled two cars, while the thick branches of another tree on the Tolstoy Marg media also snapped. 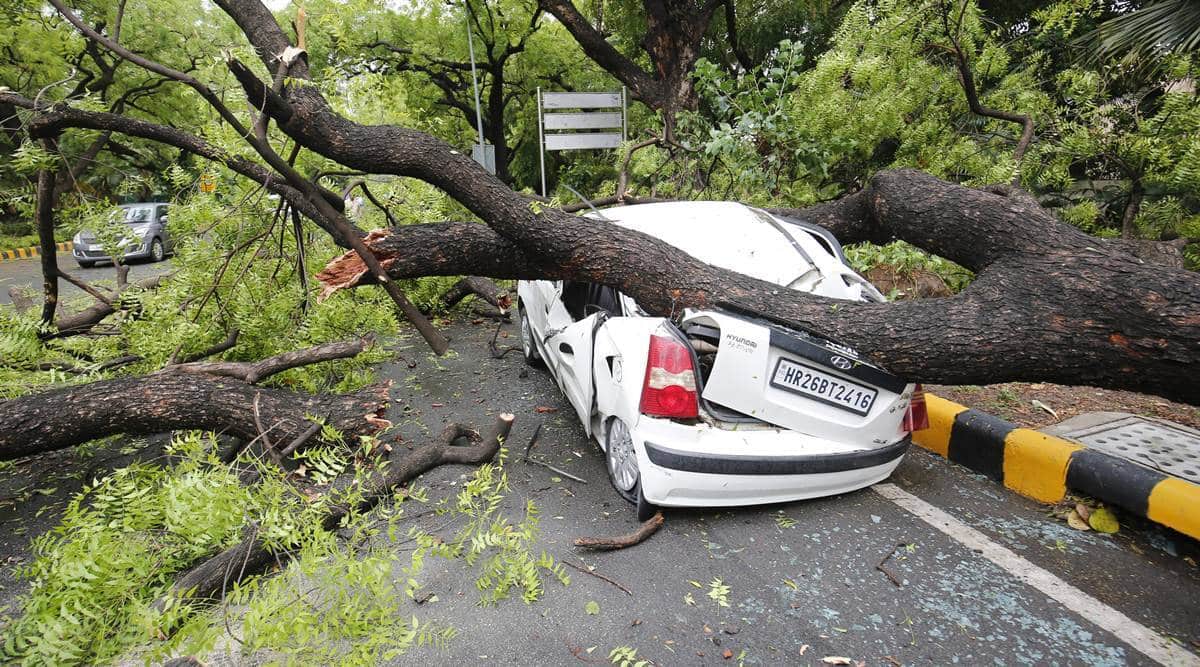 In the New Delhi Municipal Council area alone, 77 trees had been uprooted. (IE)

Snapped branches and tree trunks remain scattered around pavements and roads of Lutyens’ Delhi, two days after a ‘severe’ thunderstorm hit on Monday. In the New Delhi Municipal Council area alone, 77 trees had been uprooted, including full-grown ones, according to its Horticulture wing. It also counted 58 broken branches.

On Ashoka Road, lined with jamun trees, branches impaled two cars, while the thick branches of another tree on the Tolstoy Marg median also snapped. An uprooted neem tree lay sprawled on the road, blocking an entire side of Jantar Mantar Road.

Concretisation-led poor root growth could be a factor behind the trees keeling over, ecologist CR Babu told The Indian Express. Trees won’t fall over so easily if they have proper root growth that anchors trees to the soil. Most trees, however, have ‘feeder roots’ in the upper layers of the soil. These roots take moisture and nutrients and have symbiotic fungi around them. But these cannot survive under concrete as they need oxygen. If the space surrounding the trees is covered with concrete, there will be no life beneath it, Babu said.

He added that the trees’ canopies were also not properly managed. If the top is heavy and the root poorly developed, trees cannot sustain the wind, he said, adding that different species of trees had different tensile strength.

A National Green Tribunal order from 2013 directs authorities to remove concrete from within a 1-metre radius of trees. The Forest Department issued a notice in 2019, informing all civic agencies and departments that concretisation of trees damaged them and was an offence under the Delhi Preservation of Trees Act, 1994. The notice also ordered the agencies to manually de-concretise trees.

Babu said leaving a metre around the trees was not enough for sustainable growth. They need good feeder roots that can spread to take in the soil nutrients. However, the width of pavements hinders that.

Deputy Conservator of Forests (West Division) Navneet Srivastava told The Indian Express that if the tree was concretised from all sides, there was a greater chance that it would fall. It could be a factor in huge trees falling.

Faiyaz Khudsar, who heads the Yamuna Biodiversity Park as scientist-in-charge and the Biodiversity Parks Programme, said trees such as silk cotton and sheesham are grown in small places on the central verge of roads and then surrounded by concrete. This hinders root spread. Roots spread laterally in the long run. Winds put pressure on the big canopies, meaning that the canopies are big, but the root cannot withstand the pressure, he said.

Some avenue trees in Lutyens began to be planted in the 1930s, said environmentalist Pradip Krishen. He pointed out that trees with tap roots were no longer in touch with water as Delhi’s water table has dropped, leading to their fall. Another factor could be sidewalk cementing. He also called for proper studies into the cause.

Khudsar said if trees native to Delhi were planted and diversity ensured while planting avenue trees, survival and sustainability would become easier. He also called for new trees of different species to be planted where trees are getting older.