Comet Leonard to be visible in India tonight: When and how to catch

For those who might not know, comets are icy leftovers from early stages of outer planets’ formation, and they orbit around the Sun. 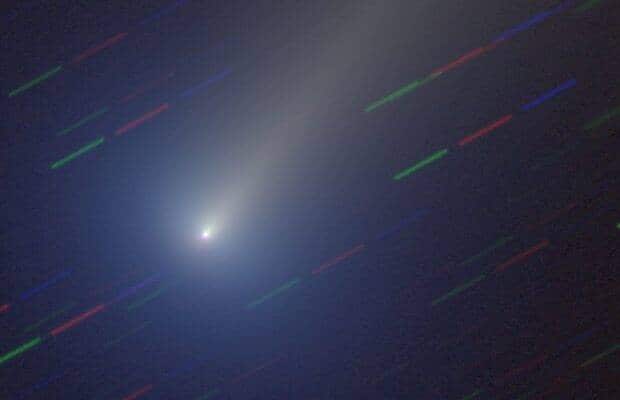 Till now, more than 3,700 comets in our solar system have been observed by astronomers. (Image: ESA)

Comet Leonard: Comet Leonard is set to make its closest approach to Earth on Sunday night. Well, we say closest approach but don’t worry, it will still be at a distance of around 35 million kilometres. Till now, more than 3,700 comets in our solar system have been observed by astronomers, according to a report in IE, of which Leonard is a typical comet which revolves around the Sun at around 47 kilometres a second. The comet is a little bright and can be seen in the sky about once a year. When it makes the closest approach, it can be seen by naked eye and people can also click pictures, the report cited ESA astronomer Marco Micheli as saying. However, for astronomers who track such near-Earth objects for potential threat, Marco said that thankfully, the comet is unspectacular in this aspect.

People can see the comet in the night sky if they are away from the city lights. Enthusiasts would be able to see a shooting star whizzing past the Earth at around 7:22 pm at a very high speed, and it might so happen that people could catch a few other comets moving at a relatively slower pace.

For those who might not know, comets are icy leftovers from early stages of outer planets’ formation, and they orbit around the Sun. While moving towards the inner solar system, the comets let out gas as well as particles. Solar radiation heats the comets and it leads to the celestial bodies producing their characteristic tails.

The report has also said that some comets also have extreme orbits, travelling distances of more than 50,000 times the distance between the Sun and the Earth.