Central Asian glaciers have melted at four times the global average since the early 1960s, shedding 27 per cent of their mass, according to a study released today. 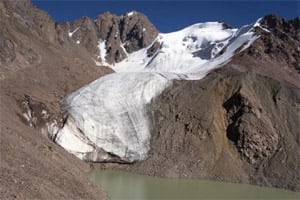 Central Asian glaciers have melted at four times the global average since the early 1960s, shedding 27 per cent of their mass, according to a study released today. (Reuters)

Central Asian glaciers have melted at four times the global average since the early 1960s, shedding 27 per cent of their mass, according to a study released today.

By 2050, warmer temperatures driven by climate change could wipe out half the remaining glacier ice in the Tien Shan mountain range, reported the study, published in Nature Geoscience.

At stake is a critical source of water for people in Kazakhstan, Kyrgyzstan and Uzbekistan, as well as a section of northwest China.

Also Read
In a first, earth’s rarest wildcat discovered on Mount Everest – Here’s all we know about it
Spectacular comets of recent times
International day of forests: Collaborative effort to help save our forests
Wondering why it never snows in Delhi even when the city is colder than many hill stations? Here’s the answer

“Glaciers are actually huge water stores. They can balance water between wet and dry years,” said co-author Doris Duethmann, a researcher at the GFZ German Research Centre for Geosciences in Potsdam.

“Within a year, winter precipitation is stored until summer, when it gets released as meltwater,” she explained by email.

Tien Shan glaciers have lost an average of 5.4 billion tonnes of ice per year since the 1960s, totalling some 3,000 square kilometres (1,158 square miles).

The rate at which the glaciers shrank greatly accelerated in the 1970s and 1980s.

Climate models point to higher summer temperatures in coming decades along the 2,500 kilometres of the Tien Shan range, thus making the glaciers even more vulnerable, the study said.

A two degree Celsius (3.6 degrees Fahrenheit) increase in summer temperatures from 2021-2050 would likely mean an additional 50 percent loss in glacier volume by mid-century.

“Since the winter months in the region are very dry and the mountains are that high, glaciers receive most of their snowfalls during summer,” principal investigator Daniel Farinotti said.

“This means that an increased temperature contributes to both increased melt and reduced glacier nourishment.”

Over a billion people around the world, especially in Asia and South America, get more than half of their drinking water from the seasonal melting of snow and glacier ice, previous research has shown.

Glaciers are especially crucial in arid places — like parts of Central Asia — which are dependent on this source of water.

“The situation is of particular concern in light of both the local population growth and the continued glacier shrinkage anticipated in response to climatic changes,” the study said.