Careful water use could ease climate threats to food: Scientists

Farmers face growing threats to their crops from more frequent drought and other extreme weather in coming decades, but using water more efficiently could help them protect food and water supplies, experts said. 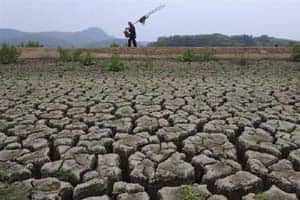 The NDMC will come up with 40 rainwater harvesting structures at prime locations in Lutyen's Delhi which will also help restore depleting groundwater table.(Reuters)

Farmers face growing threats to their crops from more frequent drought and other extreme weather in coming decades, but using water more efficiently could help them protect food and water supplies, experts said.

Globally, drought so severe it used to come once in 100 years is now expected to occur as often as every 30 years, Joshua Elliott, a University of Chicago agriculture expert, told a gathering of climate scientists in Paris this week.

Farmers in the United States boosted maize yields by 70 percent between 1980 and 2012 with only an 8 percent rise in water use, he said. But climate change is likely to stop that trend because adapting to rising heat will require water that may not be available, he said.

Also Read
International day of forests: Collaborative effort to help save our forests
India’s water crisis: Is there a solution?
The reason ‘black tigers’ exist and why that is dangerous
Owls use ‘stealth technique’ to capture prey

“When you put warming and adaptation (in the mix), water use accelerates and it accelerates rapidly,” he warned. Insufficient water means maize yields may decrease by nearly 14 percent in the United States by 2040, he noted.

The steepest losses would come in the warmer southern states, while Canada and some northern states would see increases in their harvests, he said.

But efforts to make irrigation more efficient in the United States and elsewhere – such as better rainwater harvesting, slowing water evaporation and adopting techniques like drip irrigation – could help, said Jonas Jagermeyr, a water expert at the Potsdam Institute for Climate Impact Research.

Around the world, agriculture accounts for about 70 percent of freshwater used by humans each year.

More efficient use could potentially push crop yields up by as much as 20 percent despite changing conditions, helping meet food demand from a rising world population without cutting down more forests for farmland, Jagermeyr said.

Greater efficiency could also free up water to irrigate more rain-fed farmland in drought-prone places, including parts of China and southern Africa, he said.

While adapting to some climate shifts is possible, policy makers should not rely too heavily on some key tools like drought-resilient seeds, new planting dates and more irrigation, warned David Lobell of Stanford University’s Center on Food Security and the Environment.

Many innovations intended to deal with future climate change are already being deployed, limiting their impact in protecting harvests as conditions grow more extreme, he said.