The northeastern state has been reeling under devastating floods over the last one week, impacting 47,72,140 people in 32 of the 36 districts. 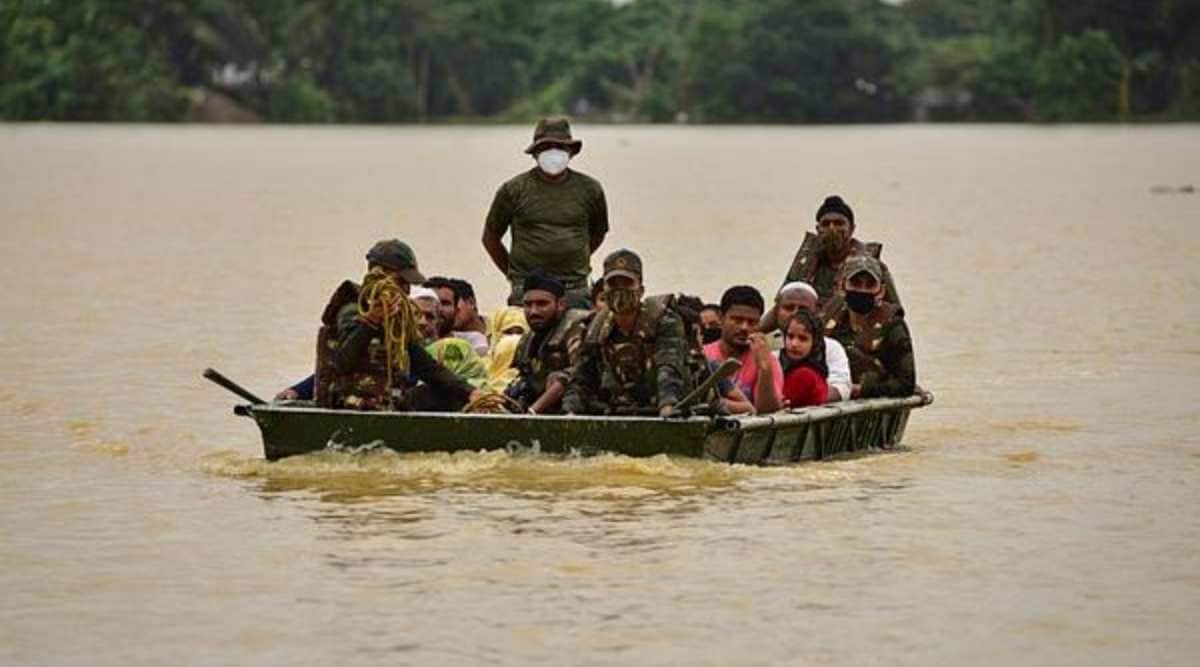 The fresh fatalities have pushed the toll in this year's floods and landslides in Assam to 82, a bulletin issued by the Assam State Disaster Management Authority (ASDMA) said. (Photo source: Reuters)

Assam’s flood situation remained bleak with all major rivers in spate, affecting over 47 lakh people and claiming 11 more lives, as Union Home Minister Amit Shah called up Chief Minister Himanta Biswa Sarma to enquire about the state of affairs, officials said. The northeastern state has been reeling under devastating floods over the last one week, impacting 47,72,140 people in 32 of the 36 districts.

The fresh fatalities have pushed the toll in this year’s floods and landslides in Assam to 82, a bulletin issued by the Assam State Disaster Management Authority (ASDMA) said.Three new fatalities were recorded in Darrang, two in Nagaon – police personnel who got washed away while trying to rescue marooned people – and one each in Cachar, Dibrugarh, Hailakandi, Hojai, Kamrup and Lakhimpur.

Seven people were reported missing, with two each in Udalguri and Kamrup and one each in Cachar, Darrang and Lakhimpur. “Hon HM Shri @AmitShah ji called twice since morning to enquire about the flood situation in Assam. He informed that a team of officials shall soon be sent by Ministry of Home Affairs to assess the damages caused by the natural calamity. Grateful to HM for his help,” Sarma tweeted on Monday.

Leader of Opposition in Assam Assembly Debabrata Saikia sought from the prime minister a central package of at least Rs 20,000 crore for relief and rehabilitation work in areas that suffered damage due to flood over the last three to four years.He urged the Centre to declare the problem of flood and erosion in the state as a national calamity.Meanwhile, Sarma held a virtual meeting with state ministers, senior officials and deputy commissioners in the districts to review the flood situation.

The chief minister said relief and rescue operations in Barak Valley will be bolstered by roping in additional NDRF teams from the neighbouring states of Manipur and Tripura.Sarma said he was in touch with his Meghalaya counterpart for restoration of vehicular traffic on the Jowai-Badarpur road that has been badly damaged due to floods and landslides.Meanwhile, North East Frontier Railways (NFR) has said that trains carrying relief, including petroleum and diesel and medical aid, will be sent to the affected areas.

The devastating floods, caused by incessant rainfall, has affected 5,424 villages, from where 2,31,819 people have taken shelter in 810 relief camps. Relief was also being distributed from 615 centres to people who haven’t taken shelter in such camps.Rivers Kopili, Brahmaputra, Puthimari, Pagladia, Beki Barak and Kushiara are flowing above the danger level, the officials said.